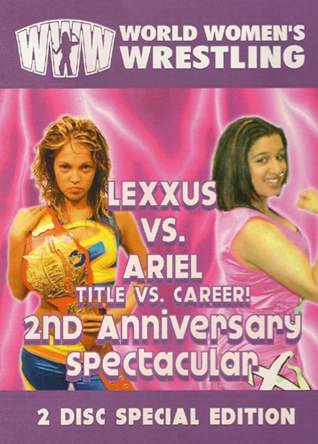 TRIPLE THREAT MATCH
Mistress Belmont vs. Sammi Lane vs. Barbie: Newcomer Sammi Lane’s extraordinary long brown hair, soft lips, and oh-so perfect body are just a few things that make me go hmmmmmmmmmmm. Barbie was also making her debut, but she is clearly not the apple of Ken’s eye. This Barbie is a dark-skinned, dark-haired, scary-faced aggressor – the quintessential anti-Barbie. Mistress Belmont is a recently-turned babyface, and the tag team partner of fellow Goth monster, Della Morte. The finish saw Barbie toss Sammi out of the ring, and Belmont rolled up Barbie for the 1-2-3 to win the match. Sammi & Barbie attempted a post-match assault on Mistress Belmont but Della Morte made the big save!

IN-RING INTERVIEW
Chris Norman & Elektra Arion + Sean Gorman + Ryan Matthews: They showed footage of a previous event where Alex Arion defeated D.C. Dillinger. After the match, Dillinger assaulted Arion, which led to an appearance from Arion’s sister, Elektra. Dillinger slapped Elektra hard across the face! Sheldon Goldberg kicked Dillinger and manager Sean Gorman out of the building under threat of suspension. For the LIVE interview, Elektra said her brothers (Frankie & Alex) are not done with D.C. Dillinger. Elektra (who has a boxing background) said she is training to become a professional wrestler. “Manager of Champions” Sean Gorman showed up and said the Dynasty of Champions is declaring war against the Arion’s. Gorman continued to insult Elektra until she dropped and gave him a low-blow! Ryan Matthews hit the ring and attacked Elektra, who fought back and gave Matthews a perfectly-executed Lung-blower. Elektra got up and knocked Sean Gorman out with one punch!

MATCH
Della Morte vs. Jana: Della Morte is representing the Daughters of Darkness, while Jana is a member of the Soul Sisters. It’s sort of disturbing to see Della Morte playing the babyface, because there is nothing babyface about her. As far as I can tell, Jana is also a babyface, but a lot more pleasing to the senses. For some reason, Morte launched herself off the top rope but crashed and burned when she missed her mark. Jana capitalized on the mistake and scored the victory over the screamin’ Goth.

MATCH
Roxxi Cotton vs. Amber: Roxxi Cotton is perhaps the most annoying wrestler I’ve ever laid eyes on, but thank God she actually has some half decent wrestling skills. She’s only annoying when she talks, and she didn’t get to do any talking so I was very happy about that! Roxxi was taking on the returning Amber, who is a bit taller and has improved upon her physical assets since I last saw her. According to announcer Sheldon Goldberg, Amber has also significantly improved her wrestling skills. Just as the contest was heating up, Barbie & Sammi Lane hit the ring to attack Amber & Roxxi for no apparent reason – causing the match to be thrown out by the referee. Amber grabbed the microphone and challenged Barbie & Sammi in a tag team match! Sheldon Goldberg not only agreed to the match, but added a No-DQ stipulation!

IN THE RING
Sean Gorman + Eddie Edwards + Evan Siks: Sean Gorman hijacked the show and blamed the fans for everything bad that has happened to him in NECW/WWW. Gorman introduced his man, all the way from Tokyo, Japan – “Die Hard” Eddie Edwards. I was hoping for Shinjiro Ohtani. Edwards challenged anybody from the back to come out and take him out of the ring. Sheldon Goldberg brought out “The Human Nightmare” Evan Siks to deal with Eddie Edwards. Siks and Edwards brawled for a while before Siks accomplished his goal of taking out the trash. Not sure what that had to do with women’s wrestling.

ANYTHING GOES TAG TEAM MATCH
Amber & Roxxi Cotton vs. Sammi Lane & Barbie: I’m already in love with Sammi Lane, so the more I see of her the happier I will be. Email me, baby. After pre-maturely ending the match on a disqualification, the dumb-ass referee had to be reminded that there was a No-DQ stipulation attached to the contest. It broke down into a chaotic brawl, then got ridiculous when Amber & Roxxi started chasing Barbie & Sammi around with silly-string! The fight got serious again once the heels regained the advantage, beating the good girls from one end of the Good Time Emporium to the other! Roxxi finished off Barbie to win the match for her team. Roxxi Cotton is so much more tolerable (and cuter) when she’s playing a fan favorite.

WWW TITLE VS. CAREER MATCH
WWW champion Lexxus vs. “The Portuegese Princess” Ariel: This would end up being the wildest match since Roxx vs. Ariel in the early days of World Women’s Wrestling. Ariel had grown frustrated without having a piece of gold around her waist so she felt it was necessary to put her career on the line – thus putting a great deal of added pressure on herself. Lexxus did a crazy hurricanrana off of stage, but appeared to bang the back of her head on the floor as she swung around. After they checked on Lexxus’ condition, Ariel followed up with a DDT on the wooden stage. Ariel flexed her muscle and stomped around like a true bully. Lexxus got up and tried to toss Ariel off the stage, sending both girls awkwardly tumbling down to the floor. They ended up back in the ring, where Ariel gave the groggy Lexxus a stuff power-bomb. Both girls recovered, and Lexxus began her come-back. Lexxus went to the top rope and went for a missile drop-kick, hitting her target with extreme precision! Ariel accidentally knocked the referee out with a strong forearm. A familiar “crazed fan” hit the ring to encourage Lexxus, who yelled at the intruder and gave him a shove. The fan then super-kicked poor little Lexxus down to the mat! Security finally showed up and chased the fan around the arena. Meanwhile in the ring, Ariel pinned the unconscious Lexxus to capture the WWW championship!

POST MATCH
Ariel + ____________?: Ariel celebrated with her belt, but wanted to know why the “crazed fan” had been sticking his nose in her business lately. For some reason the fan was allowed to come back into the ring to explain himself. The guy, an Eagle Eye Cherry look-alike, yelled at Lexxus as if they had some kind of an agreement where she would ‘lay down’ for Ariel. Ariel then assaulted Lexxus, turning heel, and introducing the world to her AGENT – Brendan Michael Thomas!!

DVD EXTRAS: Some bonus material was included on this DVD to celebrate World Womens Wrestling’s second anniversary spectacular. There was footage of a meet-and-greet Q & A session with most of the women of WWW. Each girl explained when and how they fell in love with wrestling (unfortunately Roxxi Cotton was in character). The interesting bit was when the “crazed fan” showed up and asked for a hug from Ariel, and had to be thrown out after squeezing a bit too hard. Della Morte asked Roxxi Cotton what she thinks of people who don’t like how she (Roxxi) talks – which I firmly believe was in reference to my previous reviews of Roxxi’s unbearable personality!