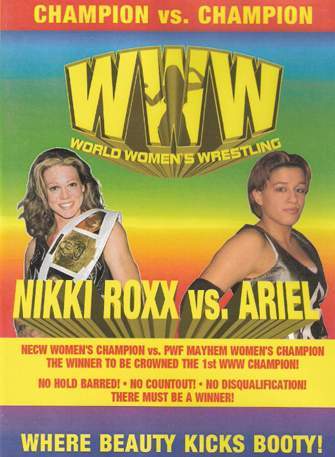 Description: New England Championship Wrestling is a Massachusetts-based promotion that has been around for over seven years now and has developed one of the most polished reputations in the wrestling industry. Promoter Sheldon Goldberg was one of many who recognized the demand for good quality women’s professional wrestling, so he created an all-female promotion called World Women’s Wrestling in 2006. They had their first show in March and by August they were ready to crown the first ever WWW champion! Nikki Roxx was the reigning NECW Women’s champion and Ariel was the PWF Mayhem Women’s champion, so they decided to book a unification match to establish a championship of the highest quality. If the intrigue of crowning a brand new champion wasn’t enough, they went ahead and threw the rule-book out the window and made it a No Holds Barred, No DQ, No Countout, No Time Limit, Must Be a Winner match and that recipe proved to be an appetizing combination for the fans in Somerville on August 13th, 2006.

But before the headliners took the stage, four other WWW wrestlers were fighting for the right to be the first challenger for whoever won the WWW title. A tournament was played out featuring Amber vs. Jana and Delle Morte vs. Violet Flame in opening round matches. Jana, who I once buried in another DVD review, has come a long way since I first saw her. Amber is almost too cute for her own good, but that ends up being her advantage because the audience will be surprised when they realize that she can actually wrestle. Jana won the match and advanced to the finals to face the winner of Delle Morte and Violet Flame, both of whom I had never seen wrestle before. Morte is one of those big scary gothic nightmare girls and Flame is the total opposite of what I imagined in my head. For some reason, I thought Violet Flame was another Goth wrestler, but I was pleasantly mistaken. She is the oldest member of the WWW roster, and was trained by Killer Kowalski, which is a definite plus in my book. She is very energetic and wears pink ring gear which is very cute. I thought for sure Morte was going to eat her alive but Violet picked up the victory to move onto the finals to face Jana.

The next match was a six-person tag team match featuring some male wrestlers from NECW. Mia Love teamed with the Canadian Superstars (J Busta and Dave Cole) to go up against Natalia and 2D Edge (Pat Masters and Jose Perez). I have seen Mia Love once or twice before and I was an instant fan. The Canadian Superstars and their manager Brian Cairo were heat-magnets singing the Canadian National Anthem – MY National Anthem. Stupid fans, don’t they know Canada rocks? Natalia (who looks fantastic) and 2D Edge are very energetic babyfaces skipping around the ring slapping hands with all the fans. This is my first time seeing Natalia as well, and I am confident enough to say I’m an instant fan of hers too! This was your classic independent tag team match, and I mean that in a good way. Natalia and 2D Edge were victorious but I wouldn’t mind seeing Mia Love and Natalia in a 1-on-1 situation in the future.

Manager of Champions Sean Gorman came out with NECW champion D.C. Dillinger and the “uncrowned” WWW champion Tanya Lee. Now I have heard A LOT about this little heel group through various press releases sent to me from the NECW offices, so I was understandably curious to see if the bark would live up to the bite (or is it the other way around?). After some heat-seeking jabbering, a match took place between Tanya Lee and a perky babyface named Lexxus. This is my first taste of Lexxus too. Sean Gorman and D.C. Dillinger immediately started interfering so Lexxus ran backstage and dragged PWF Mayhem champion Evan Siks out to ringside to watch her backside (needless to say he didn’t need to be asked twice). Both of these girls are petite and gorgeous but pack a powerful punch. Koodos to the announcers for making a Penny Banner reference on commentary during this match. I thought for sure they would push the heel Tanya Lee but the insanely beautiful Lexxus picked up a very impressive victory. Damn good match.

What a tough act to follow. Jana locked up with Violet Flame, who comes out to Jimmy Hendrix’s “Purple Haze,” in the finals of the number one contenders tournament. It came off as somewhat of a mediocre performance being squeezed in between two phenomenal matches. Jana pulled out a weapon but the referee took it away. Jana pulled out a second weapon with the referee’s back turned and used it to knock out Violet Flame and secure a future shot at the WWW championship. Yeah, good luck with that!

It was finally time for the historic main event. Another last minute added attraction had the lovely Natalia being named the special guest referee. Natalia is the only woman to hold the NECW Women’s title and the PWF Mayhem Women’s title. Of course, she won’t be the only one after tonight. PWF Mayhem Women’s champion Ariel (the heel) went head-to-head with NECW Women’s champion Nikki Roxx – who you know these days as “Roxxi Laveaux” in Total Nonstop Action. No Holds Barred. No Disqualification. No Countout. No Time Limit. There Must Be a Winner. Hot Damn. Let’s get ready to Rumble. My heart-rate actually increased as this match got underway. I had wanted to see this for an entire year and the anticipation was really exciting. Roxx and Ariel began by exchanging stiff chops and strong-style forearms to the chest. The fight spilled out of the ring where Ariel viciously rammed Nikki’s head face-first into the bar at Goodtimes Emporium. There were some drunkards sitting there that looked kind of discouraged that their drinking had been interrupted by two beautiful girls beating the crap out of each other. Nikki Roxx climbed on top of the bar and dove off onto Ariel in a truly spectacular scene. A few minutes later Ariel destroyed Nikki Roxx’s head with a chair-shot. You won’t find a more stiffer women’s match anywhere. Ariel grabbed a fork and went back to the ring and stabbed Nikki Roxx in the forehead with it! Ariel then spiked Roxx again much to the dismay of referee Natalia. Ariel started carving Roxx’s forehead like a Christmas turkey. Ariel applied the camel clutch and dragged the fork across Roxx’s bloody forehead. They have brought their bloody feud from Mexico all the way up to Massachusetts. It looks like Roxx failed to cut her forehead enough to bleed excessively (there was a little blood but nothing too sick), but she somehow suffered a disgusting laceration on the front of her left thigh. They hit the floor again and Ariel continued to dismantle Roxx by throwing a whole bunch of chairs at her. After a while both women were laid out in the ring and referee Natalia started foolishly counting them out – even though there was a No Countout rule. Nikki Roxx mounted her comeback but Ariel stood her ground and took her beating and would not surrender. Ariel made a brief comeback and hit the Dariel but Roxx kicked out. Then Roxx fought back and hit the Barbie-Crusher but Ariel kicked out! A few minutes later, Nikki Roxx finished off Ariel in spectacular fashion with a Barbie-Crusher through a table! Nikki Roxx becomes the first ever World Women’s Wrestling champion. I know it might seem like a spoiled the match with this detailed review; however nothing compares to actually experiencing this match with your very own eyes. It has to be one of the greatest, if not THE greatest, independent women’s wrestling match I’ve ever seen. Who rocks? Nikki Roxx!

Rating: 9 / 10 – I knew that the main event would deliver the goods, but I was worried about the rest of the card. I am so happy to report that I was thoroughly entertained by the Lexxus/Lee match and the six-person tag team match. I was also glad to have seen a lot of talented girl wrestlers whom I have never been able to see before.

CONCLUSION: You can watch exclusive episodes of NECW Television at NECW.TV or you can check out the selection of New England Championship Wrestling and World Women’s Wrestling home release DVDs at www.necwwrestling.com and www.worldwomenswrestling.com.