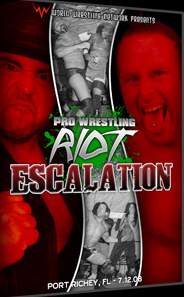 IN THE RING: Ron Niemi came out with his 911 Inc. crew of Kory Chavis, Jon Davis, and Francisco Ciatso to brag about their recent dominance over Pro Wrestling Riot. Niemi said 911 Inc. is stronger than ever, but they’re not stopping there, and announced two new members… Rebecca Bayless & “Bad Seed” Shawn Osborne! Becky Bayless is a devilish sweetheart from the Northeast wrestling circuit and Shawn Osborne is a former WWE developmental wrestler. Bayless will be Niemi’s personal assistant, but she announced that she would take care of all of 911 Inc. members needs. Editor’s Note: Where do I sign up? Osborne cut a heel promo, getting some cheap heat by calling the fans fat and old. Osborne said the people in the ring are the best of the best and no one can stop them! Niemi continued bragging on the microphone, and issued an open challenge for anyone in the back to wrestle Shawn Osborne tonight. The challenge was answered by none other than Erick Stevens! Sideshow, Bruce Santee, and Sedrick Strong also hit the ring and the PWR fan-favorites cleared the ring of 911 Inc.! Stevens cut a promo on 911 Inc., officially accepting the challenge of Shawn Osborne. Bruce Santee said he and Sedrick Strong will face Kory Chavis & Jon Davis tonight. Sideshow said the last 90 days have been the longest of his life, as he was sitting at home thinking about what 911 Inc. did to his little sister (power-bombed her through a table). Sideshow said 90 days was over and he was BACK, and promised to spill Francisco Ciatso’s blood TONIGHT!

SINGLES MATCH
Scott Davis vs. C.J. O’Doyle: I’m already a big fan of Scott Davis, just for his brilliant entrance music alone. He comes out to Joe Esposito’s “the Best Around!” from the Karate Kid movies. C.J. O’Doyle is a great young talent, trained at the Wild Samoan school, but he has turned himself into Snitsky Jr. (minus the back zits). That may very well be by design, since Snitsky was also trained by the Wild Samoans. Commentator Sean Davis put it best when he remarked that Scott Davis was a classic wrestler. He is definitely a throwback to the good ol’ days. The two commentators spent the whole match putting over Scott Davis as a classic old school wrestler. Eventually Davis lived up to the hype when he won the match by submission.

SINGLES MATCH
Snow w/George Martel vs. Fantastic Dantastic & Keith Blonde: Fans of old school jobbers will instantly fall in love with Fantastic Dantastic & Keith Blonde. Chasyn Rance came out and said Mister Saint Laurent was not there and he didn’t want to waste his time with the two wrestlers in the ring. Rance said if those two guys wanted to make a name for themselves in PWR, then they should wrestle each other. George Martel showed up with new House of M member SNOW (the former PWR security guard). This guy looks like a chubbier, uglier, and dumber version of ‘Francis’ from Pee Wee’s Big Adventure. Oh yeah, and he’s got a stupid wrestling name, too. The commentators mentioned that Snow had dropped 120 pounds, so that is impressive I must admit. Eddie Taurus wheeled Mr. Milo Beasley out to the ring in his wheelchair to chase George Martel around the ring. Ray Beez snuck up from behind and bashed Snow with the trash can! Beez put the two jobbers on top of Snow and the referee counted 1-2-3!

6-MAN WARFARE MATCH (BRIEFCASE VS. MARTEL’S JOB)
Bumz R’ Us (Ray Beez & Mr. Milo Beasley) & Eddie Taurus vs. The House of M (Lou The Fixer & Damballah & Mad Man Mandrake w/George Martel & Snow): The brawl at the end of the previous match morphed into the six-man warfare match. The Bumz have agreed to put the briefcase full of money, which they stole from George Martel, up for grabs against Martel’s career as a manager in PWR. I’m not sure why Martel would accept this challenge, since he technically owns the briefcase and should just send his monsters in to steal it back. Damballah ripped open the forehead of Eddie Taurus with a spike, causing the blood to flow! Snow remained at ringside to protect manager George Martel. Taurus was a bloody mess, and the Bumz were fighting for their lives against the House of M. Taurus somehow recovered and started fighting the wrong guy (Snow). Ray Beez and Lou the Fixer ended up outside brawling on the front lawn. Mandrake fought Beasley in the ring, while Damballah raked a barbed wire 2X4 over the bloody head of Taurus. Fans are stupid sometimes; when the action comes dangerously close to their seat and they just sit or stand there with a goofy grin on their faces. The carnage continued, as the blood flowed on both sides. Eventually the House of M scored the victory, and George Martel regained possession of the briefcase. Martel was furious when he opened it, and discovered that it was full of IOU’s. The Bumz had already spent all of George Martel’s money!

SINGLES MATCH
Kenny King vs. Nooie Lee: Team Vision member Kenny King continued his mission wrestle the best matches on every show he is booked on.

SINGLES MATCH
Erick Stevens w/Rain vs. Shawn Osborne (w/Ron Niemi & Becky Bayless): Erick Stevens came out and said if Ron Niemi was going to have Becky Bayless out there then he was going to bring out Rain to be in his corner. Rain will take care of Bayless, but who will take care of Ron Niemi? It was a very athletic and hard-hitting match until 911 Inc. hit the ring and assaulted Erick Stevens causing the disqualification. It’s starting to feel like a broken record. Bruce Santee, Sedrick Strong, and Sideshow hit the ring to make the save – and suddenly the girls were going at it for a brief catfight!

SINGLES MATCH
Bruce Santee & Sedrick Strong vs. The Dark City Fight Club (Kory Chavis & Jon Davis w/Ron Niemi & Becky Bayless): The chaotic brawl at the end of the previous match morphed into the hotly contested tag team grudge match. I was thinking that it would have been a great time for the good guys to finally get one over on 911 Inc., but the finish saw the heel team of the Dark City Fight Club get another victory and continue their dominance over the PWR babyface heros.

ANYTHING GOES MATCH
Sideshow vs. Francisco Ciatso (w/Ron Niemi & Becky Bayless): Sideshow carried the weight of the entire company on his shoulders, as he tried to get revenge on 911 Inc. for everything they had done to Pro Wrestling Riot, and to him personally. Several months ago, 911 Inc. did the unthinkable when they viciously put Sideshow’s baby sister through a table and broke her neck! While seeking revenge, Sideshow let his emotions get out of control, and 911 Inc. defeated him in a “Loser Leaves PWR for 90 Days” match. So now that the 90 days has expired, Sideshow is back fighting for the honor of his sister, himself, and the PWR faithful. Sideshow was busted open bloody, and it looked like 911 Inc. was going to walk away with another victory. Sideshow fought through the pain and used a Pile-driver to finish off Ciatso once and for all! 911 Inc. immediately attacked Sideshow like a pack of hungry wolves, but the babyface locker-room emptied to come to Sideshow’s rescue, sending 911 Inc. retreating back to the dressing room. Ron Niemi and his crew were running so fast that they forgot poor Francisco Ciatso. Sideshow and the babyface contingent tried to use Ciatso as bait, but 911 Inc. would not return to the ring when the numbers were not in their favor.

For more information on PWR, go to www.ProWrestlingRiot.com today