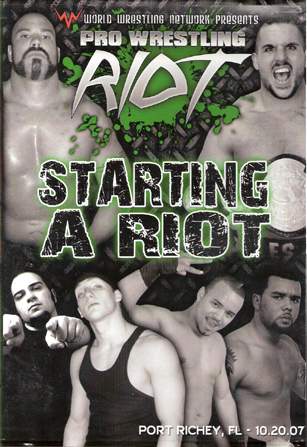 Description: Yet another independent promotion has popped up in Florida, and its name is Pro Wrestling RIOT. I assume it is loosely affiliated with Full Impact Pro, since some of the FIP championships are being defended at the RIOT events, plus they share a DVD distributor. I always look forward to checking out new talent, so let’s get started.

Club 305 (Scott Commodity & Austin Andretti w/Amy Vitale) vs. The Lifeguards (Wade & Daron): Club 305 are your typical arrogant attention-craving heel tag team accompanied by their hot blonde valet, Amy Vitale. After some brief heat-seeking mic time, Club 305 were introduced to their opponents, The Lifeguards, who brilliantly came out to the theme to Baywatch. After a while, the Lifeguards were in firm control, but some outside interference from Amy Vitale turned the tables and helped Club 305 score the victory ( 7 / 10 ). The crowd was wild for this, your average independent tag team match.

Logan Fernandez vs. Damon Toro: Who? Two eager-to-please youngsters were interrupted by manager George Martel who introduced his client Dambala (I think this was LaDuke Jakes from the early days of FIP?), who came out and destroyed both Fernandez and Taro ( 3 / 10 ).

“The Natural” Kenny King vs. Eddie Taurus: Finally someone I recognize – Kenny King, former Tough Enough contestant and Full Impact Pro standout. Eddie Taurus is the definition of a local independent wrestler. Kenny King came out and jumped up on the second rope and the top of his head touched the ceiling, which gives you an idea of the size of the venue. This match was a bit too long, but thankfully ended with Kenny King nailing an F5 type move for the win ( 6.5 / 10 ).

Team Vision, Chasyn “Not Cocky” Rance and Mr. Saint Laurent, came to the ring for some mic time. Mr. Saint Laurent is SO not what I envisioned; I imagined a distinguished gentleman, but I got Bastian Booger with hair and sun-glasses. Then some pig-tailed girl showed up and got bullied by Team Vision, leading to Sedrick Strong and Joshua Masters, collectively known as Delta Iota Kappa, hit the ring to save the girl – whose name turned out to be “Fetish.” Delta Iota Kappa wanted to start their scheduled tag team match right away but Team Vision backed down like a couple of cowardly lions.

Anything Goes Match – Ray Beez vs. Sideshow: I’ve never seen these two before but I’ve seen their name on many Florida independent results. Ray Beez looks like your typical hardcore wrestler. This “hardcore” match ironically started with some greco-roman mat wrestling but quickly broke down into a violent encounter. I wouldn’t call this a Hardcore match so much as a Street Fight – there is a difference. Sideshow won, but Ray Beez issued a vicious post-match beat-down using a deformed trash can but bailed out when Sideshow started to make his come-back ( 6.5 / 10 ).

Team Vision (Chasyn Rance & Mr. Saint Laurent) vs. Delta Iota Kappa (Sedrick Strong & Joshua Masters w/Fetish): I remember Joshua Masters from the early days of FIP, working as one of the original followers of C.M. Punk’s New Dawn Faction. Sedrick Strong is the storyline brother of ROH/FIP star Roderick Strong, and they formed a tag team many years ago around the Florida circuit. After some hot tag team action, Kenny King interfered and helped Team Vision secure a tainted victory ( 7 / 10 ). After the match, Team Vision and Kenny King continued the assault on Delta Iota Kappa, including Mr. Saint Laurent giving Fetish his finisher. This makes sense because Kenny King and Chasyn Rance are partners in FIP and now Kenny has joined Team Vision. 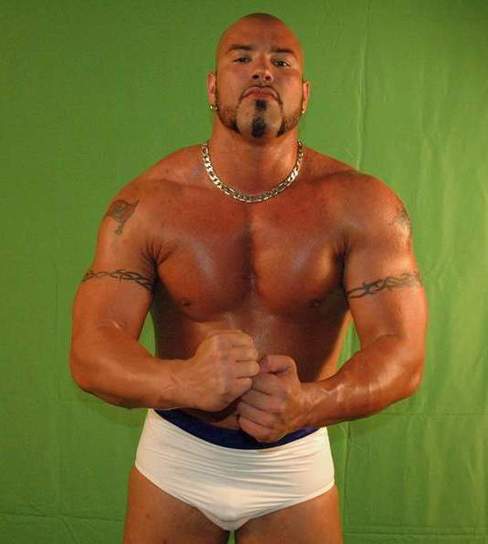 Erick Stevens vs. Bruce Santee w/”Supermodel” Amy Love: This match was not only for Stevens’ FIP Florida title, but also for some kind of bragging rights to see who was the best wrestler in the state of Florida. 2007 was Erick Stevens’ break-out year, and his appearances in Pro Wrestling Riot was one of the stepping stones along the way. It was a battle of powerhouse wrestlers for around fifteen minutes, going back-and-forth, until Erick Stevens used a quick backslide to pin Bruce Santee for the win ( 8 / 10 ). Bruce Santee was visually upset but he got the consolation prize of being comforted by his beautiful valet/wife Amy Love (do yourself a favor and Google her folks).

Ron Neimi, who I assume is the promoter, entered the ring and put both performers over and praised the fans for making Pro Wrestling RIOT’s debut show a success. Erick Stevens left with his belt and Ron Neimi continued to put Bruce Santee over as an unrecognized star in professional wrestling and then proceeded to throw Santee a birthday party in the middle of the ring. Rod Steel, Mike Shane (one of the Gymini), Francisco Ciatso, and some unnamed girls joined in the party which turned into a ten-minute trip down memory lane but the feel good moment had a very shocking ending…… one of the best things I’ve seen on an independent show. You’ll have to buy the DVD to see what I mean!

Final Thoughts: Ron Neimi was calling the action, but the fan audio was too loud and the commentary was far too soft. Other than that the production was actually quite good, which is to be expected from the World Wrestling Network. This came off as a very “independent” type event, but this is exactly how FIP started out before they adapted to a more DVD-friendly product.

If you would like to purchase this or any other Full Impact Pro DVD, please check out ROHwrestling.com – and also be sure to show your support by checking out www.fullimpactpro.com/ – Thank you!