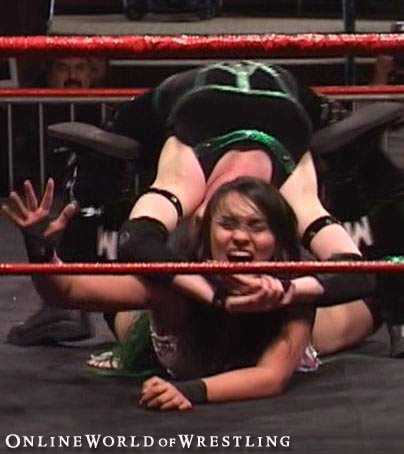 WOW… talk about culture shock. After about a decade of being brainwashed by Dub Dub E’s desperate version of Women’s wrestling, I found it extremely refreshing to sit down and watch an event full of real women athletes competing in a wrestling ring, and using actual wrestling moves. Attendance was embarrassingly low and I pray that SHIMMER catches on and more people go to the shows, because the girls really deserve it, and more voices could really add to the atmosphere. This was SHIMMER’s debut show, and with the exception of a few minor flaws, I enjoyed myself from bell to bell.

I had a lot of fun watching some female wrestler whom I had never actually seen on video prior to this occasion. For example the first match featured Shantelle Taylor and Tiana Ringer, two of Canada’s finest examples of home-grown talent. They had wrestled each other a million times before and opened the card with a great match. The fans were then treated to tag team action, pitting the annoying heel Team Blondage (Krissy Vaine and Amber O’Neal) facing the make-shift combination of Cindy Rogers and Nikki Roxx. Everyone was decent here but Roxx was clearly the star, and I look forward to seeing her in some singles bouts in the future. Ariel (what a sweetie) battled IWA Mid South’s Rain in a nice test of skills for both women. This was my first taste of Ariel, and I have to give her a lot of credit, as she surprised me with how well she has developed as a wrestler.
Rain is one of the most beautiful women I’ve ever laid eyes on — “Sick” Nick Mondo is a lucky man! Next we had my personal highlight of the night with everybody’s favorite California girl Cheerleader Melissa taking on the demonic force of MsChif. I’ve seen lots of Melissa matches and she is my favorite by far, but this was my first chance to check out a complete match involving MsChif — what a threat she is with her unique personality! The match was a stiff contest and included Melissa stretching the hell out of MsChif in positions that just had to be seen to be appreciated. Ring veteran Lexie Fyfe brought all of her experience to a SHIMMER ring and faced Christie Ricci in a decent match. Allison Danger, who doubled as color commentator all night long, was fortunate enough to get a match with WWE-signee Beth Phoenix (Note: It was easy to spot the WWE employee in the roster photo, look for the one with BIG BOOBS). This was the best match I’ve ever seen out of Allison Danger, and I’m really looking forward to watching more in future SHIMMER DVDs. Sara Del Rey and Mercedes Martinez slowed things down a little bit and went at it for neary 30 minutes with back and forth action. ROH-influence was felt before, during, and at the end of this match and handshakes were exchanged and respect was shown. Mercedes Martinez is a close second on my favorites list. The main event featured two ROH valets donning the tights and going to war for a 20 minute battle to end the evening with a solid match. Daizee Haze is deceptively tough. Lacey is deceptively talented.

Final Thoughts: There was an obvious lack of stipulations, but that is understandable seeing as though it was their first show. This was by no means a failure, because I was happy with this volume; I do, however, expect an improvement in future SHIMMER DVDs. If they expect to continue producing DVDs, the girls are going to have to learn how to perform for the cameras as opposed to the locals. Thank you to all the girls and keep up the wonderful effort. 7.5/10