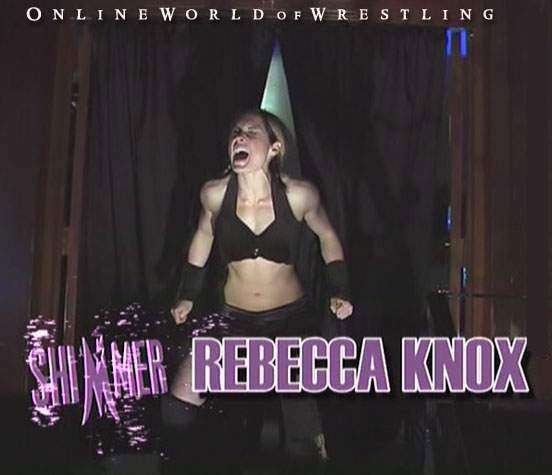 SHIMMER returned to Berwyn with a slightly modified roster and turned out another stellar show in front of their largest crowd to date. They have also added a big screen to the set and a few other minor adjustments to improve the atmosphere. They must have changed the lighting system too but it wasn’t for the better, as the ring seemed more dark and dingy than the previous DVDs. Despite this, the stars of SHIMMER were shining bright for Volume 5.

The opening match featured “Country Girl” Lorelei Lee facing one half of the Minnesota Home-Wrecking Crew, Rain. They keep hyping Rain and Lacey as a tag team but they have yet to appear as the Minnesota Home-Wrecking Crew, something I have been anticipating. Rain won the match and had her arm raised ( 5 / 10 ). Lorelei Lee is in great shape and has a great look but is still rough around the edges; she continues to improve and will be something special in the future.

Next up was Cindy Rogers falling prey to MsChif‘s horrifying green and black attack ( 6 / 10 ).
They showed clips of the SHIMMER 6-Woman Mayhem match from the 3/31 Ring of Honor show in Chicago which showcased MsChif vs Cheerleader Melissa vs Rain vs Lacey vs Daizee Haze vs Allison Danger with MsChif coming out on top.

What a treat it was for me to finally see OVW Diva Serena Deeb in action for the first time. She is training at OVW but it not yet signed with the WWE. She was very impressive in her match against Team Blondage alumni Amber O’Neal. It took a handful of tights for O’Neal to pin Serena in a very good match ( 6.5 / 10 ). I think Serena has an extremely bright future in professional wrestling so watch out for her in the WWE some day!

Lexie Fyfe and Malia Hosaka are collectively known as “The Experience,” due to their overwhelming experience advantage over just about everybody in SHIMMER (possibly combined). Their open challenge was accepted by Ariel and the debuting Chicago-native Josie. Malia Hosaka is the total package as far as I’m concerned; She has experience, wrestling skills, and still looks physically amazing. I always thought of her as a babyface but she has the heel-shtick down to a science. Ariel and Josie made for a good underdog story with a bad ending as Hosaka and Fyfe were too much ( 7 / 10 ).

Allison Danger, who clearly has a heavy emotional stake in the SHIMMER promotion, consistently seeks the absolute best competition that SHIMMER has to offer. Her pursuit of excellence has guided her to a showdown with “Future Legend” Cheerleader Melissa in a match that had a high dose of Japanese influence. Cheerleader Melissa was applying the inverted Cloverleaf onto Allison Danger when MsChif ran down and assisted Danger in reaching the ropes. MsChif caused a brief distraction allowing Allison Danger to roll-up Melissa for the 1-2-3 to win the match ( 7.5 / 10 ). Melissa bolted from the ring and had an intense pull-apart brawl with MsChif — that is something you never see women wrestlers engage in… the locker-room emptied with the heels holding back Melissa and the faces holding back MsChif.

The extremely intimidating force of Amazing Kong made her SHIMMER debut and it was the largest debut in the history of the company. She is from California but has spent the majority of her career wrestling for various promotions in Japan. She is big and she is mean and knows how to dish it out! Poor Nikki Roxx took a major beating and earned her stripes in this match. She earned a hug and twelve days of bed-rest if you ask me. Roxx held on for as long as she could and managed to get some brief flurries of offense but it was a losing effort as Kong eventually put Roxx out of her misery with a second rope splash, a wild back-fist punch, and a sit-out power-bomb ( 7 / 10 ). Wild, just wild.

Lacey had the distinct opportunity to face WWE’s most recent diva signee, Nikita, who was en route to Louisville, Kentucky when she took the SHIMMER booking. She is from the United Kingdom and was (at the time) the reigning Queen of Chaos champion. I had the opportunity to watch and review the Queens of Chaos DVD and found Nikita to be very impressive and worthy of her WWE employment. Nikita was out to make an impact on American soil, while Lacey did everything in her power not to be a stepping stone. They ended up going at it tooth and nail, beating the hell out of each other and sharing in the process of rearranging Lacey’s pretty face. Seriously she took some too-close-for-comfort shots to the face and jaw, including a bone-crunching curb-stomp on the mat. Nikita won the match and had her hand raised but she definitely earned her “W” on this day ( 8.5 / 10 ). Nikita would later debut for OVW as “Katie [The Kat] Lea” and also capture their Women’s Championship. I’m 100% positive that she will be on WWE TV sooner rather than later.

In a big time rematch from Volume #4, Rebecca Knox and Daizee Haze set forth to push the envelope in a rare 2/3 Falls contest. Rebecca Knox, fresh off her 19th birthday, is perhaps the most unique human being I’ve ever laid eyes on and you just can’t help but adore her. It’s easy to play along with her heel character because she is so good at it — she’s the kind of wrestler us marks just love to hate! [Insert Growl] — These two chicks are perfectly matched as they share the same body-type (tough and skinny) and are equal in just about every comparable trait – except geography. There was a hilarious pre-match dance-off which rivaled the antics of the Blue Meanie and Tracy Smothers in ECW. K-Nox and The Haze spent the first fifteen minutes of the match rolling around on the mat exchanging arm-locks, wrist-locks, and leg-locks in a dramatic showcase of non-stop submission-based wrestling. The risk-factor was raised when Knox slipped outside and Haze performed a suicide dive onto her. This was followed up by a long exchange of many intense chops to their delicate chests. At this point they both started trying some high flying moves, but they each missed very important high-risk top rope maneuvers. Daizee Haze scored the first fall after connecting with the dreaded Heart-punch! At this point it was a four star match only twenty minutes into it. They quickly went back to the mat-based grappling which quite frankly is a fascinating spectacle. Knox started getting desperate and began to unleash her inner dirty girl by scoring a pinfall while holding the ropes with her hand for leverage after about six minutes. The third and final round started out with extreme intensity as both fighters went in for the kill. This fast-paced action, coupled with fatigue setting in, resulted in some sloppy moments in the third fall. Rebecca Knox clipped Daizee’s knee and applied a submission hold and grabbed the ropes for leverage causing Daizee to have her shoulders pinned 1-2-3 ( 9 / 10 ) ! Allison Danger charged the ring to protest and stick up for her fellow “Ring of Honor girl” and challenged Knox to a match under Pure wrestling rules on Volume 6.

Way back on SHIMMER Volume #1, “American Angel” Sara Del Rey fought “Latina Sensation” Mercedes Martinez to a dramatic twenty minute draw in a match that quite possibly put SHIMMER on the map. So here we are on Volume #5 with the highly anticipated rematch with an unprecedented No-Time-Limit stipulation. Most no time limit matches start off very slowly but these two insanely gifted women went at it full force trying to literally knock each other out right away. I have a lot of favorite female wrestlers but Sara Del Rey takes the cake – she is just phenomenal. The American Angel and the Latina Sensation turned the heat on and kept up the pressure for over 20-minutes until Martinez had Del Rey in a submission hold and Del Rey rolled over and pinned Martinez’ shoulders to the mat for the win! ( 8.5 / 10 )

Final Thoughts: WWE must be subscribing to SHIMMER Women Athletes because they have now signed Shantelle Taylor, and have also scooped up Nikita from the UK. In today’s wrestling market, it’s so rare to find a women’s wrestling match that lasts anywhere near 30 minutes and this DVD alone features two of the best you’ll ever see in the western hemisphere. This DVD is a full three hours, while previous releases were closer to two hours. Volume #5 is well worth the price of purchase.