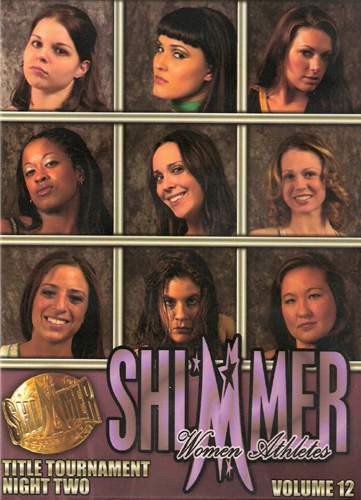 It’s finally time…. time to crown the first ever SHIMMER champion, and every one of the remarkable athletes that make up the SHIMMER roster wants to get their hands on the coveted championship. SHIMMER Volume 11 featured the first two rounds of an intense 16-woman tournament, narrowing the field down to the four top women wrestlers in the promotion. Semi-final matches scheduled for SHIMMER Volume 12 include Sarah Stock vs. Sara Del Rey and Lacey vs. Daizee Haze – with the winners facing off in a historic finale. Buckle your seatbelts, wrestling fans!

Alicia vs. Josie: Priority number one for Alicia was to begin her ascent up the ladder of success and back up all the trash talking she has been doing since debuting with SHIMMER only 24 hours before this match. The young upstart Josie made Alicia eat her words by picking up a rare victory over the arrogant blond from Hackensack ( 5.5 / 10 ).

Semi-Final – Lacey vs. Daizee: The first semi-final match happened to be a rematch from the main event of the first ever SHIMMER DVD, pitting the Minnesota Home-wrecker, Lacey, against her ultimate nemesis and Woodstock flower-child, Daizee Haze. This feud boiled over from their battles in the Ring of Honor promotion throughout 2007. The intensity was unusual for only second match on the average wrestling card, but they were pulling out all the stops for this event. Dave Prazak seems to be at his happiest when he’s calling Haze vs. Lacey matches. Lacey ducked the Heart-punch and hit a devastating Lung-blower, followed up with a DDT, and pinned Haze to avenge her Volume 1 loss and secure her spot in the finals ( 8.5 / 10 ).

Semi-Final – Sarah Stock vs. Sara Del Rey: I got my first taste of fellow Canadian Sarah Stock when she debuted on SHIMMER Volume 11, and was so impressed by her superior skills that I declared that she was now tied with Sara Del Rey as my favorite women’s wrestler. So not only were Stock and Del Rey competing for a coveted spot in the finals, but perhaps more importantly fighting for my unconditional love and support (hilarious sarcasm). I enjoyed this match so much that I watched it twice, and I’ll probably watch it again later. The Dark Angel (Stock) is the first opponent to really match up evenly with the American Angel (Del Rey). Stock used her leverage to foil Del Rey’s attempt to use the Royal Butterfly (the sexiest finisher in women’s wrestling). After an amazing incredible unbelievable match, Sara Del Rey finished Sarah Stock off with a Pile-driver (rarely used in women’s wrestling) with literally only a few seconds to spare as they neared the end of the twenty minute time limit. The American Angel officially retained my unconditional love and support and earned the right to face Lacey in the finals ( 9.5 / 10 ). I can’t say this enough, but Sarah Stock is just PHENOMENAL!

Street Fight – Allison Danger vs. Cindy Rogers: Allison Danger was granted her wish for a No-DQ Street Fight with enemy-at-large, “The Definition of Technician” Cindy Rogers. This feud has been brewing since SHIMMER Volume 9 when Cindy Rogers turned on Allison Danger in a tag team match with Malia Hosaka and Lexie Fyfe. The brutality was off the charts for this match, as Rogers violently threw Danger head-first into the ring-steps, guard rail, and ring post. Rogers looked like a total badass for this match, not wearing her traditional wrestling gear. Rogers found a stop sign and drop-kicked it right into Danger’s face (kiss it better?). At this point, Danger was totally getting her ass kicked but began to mount a come-back. Eventually a heavy chain, which was brought to the ring by Cindy Rogers, was introduced into the match, but didn’t play a major factor in the finish because Allison Danger scored a sudden victory to win the battle ( 7.5 / 10 ). The chain did serve its purpose after the match, when Cindy Rogers callously assaulted Allison Danger’s knee with the chain. After Rogers made her escape backstage, the enraged Danger asked for the microphone and challenged Rogers to a Dog Collar match on Volume 13!

4-Corner Survival – Eden Black vs. Portia Perez vs. Ariel vs. Nikki Roxx: A match formula borrowed from Ring of Honor, the four corner survival featured the red hot British chili pepper Eden Black, the international superstar Portia Perez (the all-time cutest heel wrestler), the Portuguese princess Ariel, and the best ass in the business Nikki Roxx. Roxx, who clearly had a distinct size advantage, tripped going up the ring-steps but fortunately her ascent was a little more successful on the second attempt. Poor little Portia (the cowardly heel) found herself in a three-on-one predicament as the match got underway. Nikki Roxx and Ariel have a lot of history, having feuded extensively in the New England Championship Wrestling promotion. The following announcement was paid for by the fans and supporters of Portia Perez: Portia Perez is Frickin’ Awesome! End Announcement. In many ways, this was Portia’s match, but it was the bigger, better, and bootilicious Nikki Roxx who walked away with the WIN ( 7 / 10 ). Roxx showed sportsmanship after the match by showing her respect for Ariel and Eden Black. No love for Portia Perez? She’s FRICKIN’ AWESOME!

Serena Deeb vs. Rain: The previous night, Serena Deeb lost her spot in the SHIMMER title tournament after being involved in an unfortunate car accident on her way to the show. Thanks to God above, Deeb was still in one piece, happy and healthy, and looking better than ever in a brand new set of ring gear. Deeb’s entrance music was “Crash” by Gwen Stefani – isn’t that ironic (doncha think?) Rain has shown astonishing improvement throughout 2007, and earned herself a spot in the Knockouts Division in TNA going by the name Miss Payton Banks. It looks like they are setting Serena up for a big push, and I can’t wait to see how she handles it! The push got off on the wrong foot because the Minnesota Home-wrecker, Rain, was victorious over the Deebster ( 6 / 10 ).

Cheerleader Melissa & MsChif w/Daffney vs. Lexie Fyfe & Malia Hosaka: Our good friend Cheerleader Melissa pulled out the green and black ring gear to match the colors of her tag team partner, MsChif. Lexie Fyfe and Malia Hosaka, collectively known as “The Experience,” couldn’t be bothered with the ring introductions and seemingly had problems hearing the things going on around them. Soon the people figured out that Fyfe and Hosaka had wisely plugged their ears to counter the intimidating screams of MsChif and Daffney. Commentator Allison Danger pointed out that Melissa was actually smiling while she was dishing out punishment on her unlucky opponents. This was an action-packed tag team match which concluded with the team of Melissa & MsChif ending the undefeated streak of The Experience ( 7 / 10 ).

Finals – Sara Del Rey vs. Lacey: You had to know there were a lot of proud people backstage watching this match unfold, knowing it was the culmination of nineteen months of hard work and determination. A lot of promotions just make a championship on their first show, but SHIMMER waited until it would mean something, and built it into something special, and you can be damn sure it will be treated as something special from here on out. They did a good job pitting the biggest heel (Lacey) in the company against the biggest babyface (Del Rey). The crowd was also proud to be apart of SHIMMER, and probably don’t realize just how much they influenced the growth of the promotion. The finale was a long grueling match well over twenty minutes of back-and-forth action. Rain interfered on Lacey’s behalf, prompting Nikki Roxx and Allison Danger to run down and take Rain out! Sara Del Rey mounted her come-back and nailed Lacey with a spectacular Pile-driver and scored the pin to finally become the first ever SHIMMER champion ( 8 / 10 ). The final match was great, but not as dramatic as either of the semi-final matches. Congratulations Sara Del Frickin’ Rey!

Final Thoughts: This historic DVD belongs in every wrestling fan’s collection. It would also be the perfect gift for any wrestling fan.