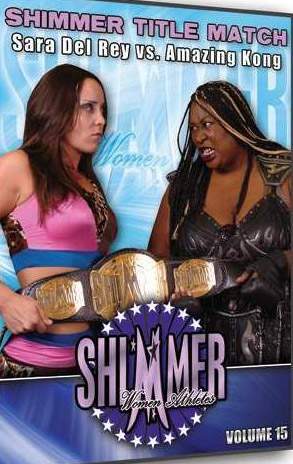 MATCH
Amber O’Neal vs. “Jezebel” Eden Black: I have slowly but surely become a huge fan of Amber O’Neal over the past two years. Eden Black, on the other hand, instantly became one of my favorites after my initial exposure to her talents. I have never seen anybody else make this comparison, but she reminds me of a mini Lita, with that spicy attitude and fiery red hair. The announcers continue to burn O’Neal for caring too much about her own looks instead of concentrating on getting victories in SHIMMER. I hope they are going somewhere with those comments and not just burying the poor girl. Amber tried to use some dirty tactics on the Jezebel, pulling on her long red hair, but Eden Black made the blond bitch tap out to the Garden of Eden – a very electrifying submission hold.

TAG TEAM MATCH
Portia Perez & Nicole Matthews (debut) vs. Lorelei Lee & Ashley Lane (debut): A tag team match featuring a whole bunch of youngsters. The fans noticed the obvious youth being highlighted in the ring, and chanted “past your bed time!” I’ve personally been looking forward to seeing Nicole Matthews in SHIMMER competition. Nicole was known as “Nikki Matthews” in British Columbia’s ECCW, but the name “Nikki” is already taken by somebody else in SHIMMER – somebody who Roxx. I’m also glad to see Ashley Lane (formerly Lexi Lane – again, that name was taken) getting an opportunity with SHIMMER. It’s always good to see fresh new faces. Lorelei Lee, who has been around off and on since Volume 2, has some new ring gear and has gotten into even better shape than before. Portia Perez finds herself in the unfamiliar roll of being the ring general. Young Portia has unbelievable experience and skill for a wrestler her age. Portia and Nicole proved to be just too “Frickin’ Awesome” for Lee and Lane in this short tag team match. I remember suggesting to Dave Prazak that he should call the Perez/Matthews team the “Mother Canuckers” but he seemed set on calling them “Team Frickin’ Awesome.” Well they ARE Frickin’ Awesome.

MATCH
Jetta (debut) vs. Serena Deeb: The United Kingdom’s answer to “Lacey” is a young loud-mouthed British wrestler named Jetta, and Jetta has finally come to SHIMMER to debut in a match against the increasingly beautiful Serena Deeb. God bless Dave Prazak for bringing in such entertaining international talent. Jetta used a brutal Stranglehold Lung-blower followed up by a Stranglehold Camel-clutch for the impressive submission victory.

IN THE RING
Becky Bayless & Allison Danger: The nerdy-hot Becky Bayless introduced SHIMMER ambassador Allison Danger, who came out wearing that creepy Oriental white mask again. Bayless asked Danger about her recent losses to Cindy Rogers, who Allison referred to as the zit on the rear end of society. Cindy Rogers came out clearly not approving of Danger’s jealous insults. Rogers attacked Danger and a referee appeared out of thin air to begin an impromptu match!

BACKSTAGE INTERVIEW
Becky Bayless & Alexa Thatcher: Alexa Thatcher’s foot is all healed up, and she is on the hunt to extract revenge on Alicia for attacking and further injuring it several months ago.

TAG TEAM MATCH
The Minnesota Home-wrecking Crew (Rain & Lacey) vs. Ariel & Josie: As much as I like Ariel & Josie, I knew this match was going to drag on way too long with the clearly superior Home-wreckers selling too many moves for these two life-time Mid-card girls. After some back-and-forth, the Home-wreckers did their best to make their opponents look half-way decent before scoring the predictable victory.

MATCH
Cheerleader Melissa vs. Alexa Thatcher: This match could have been, and probably should have been, a total squash in favor of Cheerleader Melissa. Alexa Thatcher, however, has a tendency to surprise a lot of people with her great performances. Melissa was uncharacteristically happy and flashing her best babyface smile during her entrance to the ring. Melissa finished off Thatcher with a Kudo-driver, which was performed safely and perfectly, but announcer Allison Danger sold it as if Alexa’s head popped off and landed in her lap. Melissa is on cruise control, driving head-on into a future shot at the SHIMMER championship.

TAG TEAM MATCH
The Experience (Lexie Fyfe & Malia Hosaka) vs. The Scream Queens (Mschif & Daffney): On the last SHIMMER DVD, Daffney made her in-ring debut against Lexie Fyfe, but unfortunately injured her knee in the process. That was three months beforehand, so I guess either the injury was a work, or she healed up in time for this tag team match. I think the Scream Queens are hilarious. Daffney is GOOFY scary, but MsChif is SCARY scary! The Experience prevailed in this match, but I think the Scream Queens will have their day of reckoning some day.

MATCH
Daizee Haze vs. “Dark Angel” Sarah Stock: Oh my goodness, if you haven’t seen Sarah Stock yet, then what in the heck are you waiting for! This girl is over-flowing with the most incredible natural talent and unbelievably superior skills. Plus she is in phenomenal physical condition and looks extraordinarily hot! Please excuse me for a minute while I put my thesaurus away. Stock and Haze were the two wrestlers who didn’t make it past the Semi-finals of the recent SHIMMER championship tournament. Now they were fighting for the right to challenge for the SHIMMER title on the next DVD, volume 16 of the series. This great match between two very skilled wrestlers ended with Sarah Stock becoming the new number one contender. The Dark Angel will face SHIMMER champion (winner of the Del Rey vs. Kong match), on Volume 16 and that should be an epic confrontation of astronomical proportions!

SHIMMER TITLE MATCH
“American Angel” Sara Del Rey vs. Amazing Kong: This challenger for the SHIMMER championship is one of very few women wrestlers who won’t be intimidated by Sara Del Rey’s dominant approach to combat. I wouldn’t have believed it if I didn’t see it with my very own eyes, but Sara Del Rey actually managed to execute the Royal Butterfly on the massive Amazing Kong! Del Rey went for a pinfall, but Kong smacked her almost out cold with a Back-fist. The referee began counting both women down, and Del Rey struggled to get to her feet in time but Kong failed. Sara Del Rey retains the SHIMMER championship over a VERY irate Amazing Kong!