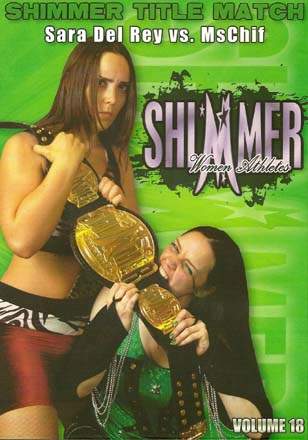 SINGLES MATCH
Amber O’Neal vs. Shark Girl: Amber O’Neal is riding a wave of momentum, coming off a rare victory on Volume 17 which broke her seemingly endless losing streak. It is so plainly obvious that Shark Girl is Daffney Unger in a mask, but they sort of play it off like the Curry Man character in TNA. Shark Girl is billed from Japan, and comes to the ring to stereotypical Japanese music. I think the Shark Girl gimmick should be Daffney’s ticket to TNA, but they are most like too dumb to take advantage of something that is right in front of their face. Well it was a bit of a sloppy match but Shark Girl successfully snapped Amber’s one-match winning streak with a victory in this opening contest.

IN-RING INTERVIEW
Becky Bayless & “Your Soul’s Tormentor” MsChif + Sara Del Rey: McChif talked about Volume 17, when she hit SHIMMER champion Sara Del Rey with the Desecrator and had her pinned for more than three seconds (with no referee). MsChif called Del Rey to the ring, and the champion admitted that MsChif did have her down for more than three seconds. MsChif demanded a title shot, and Del Rey said she would give it to her tonight in the main event!

SINGLES MATCH
Nicole Matthews vs. Lorelei Lee: I have sort of dreaded the sight of British Columbia native Nicole Matthews doing a singles match in SHIMMER because I feel she just cannot handle it at this point in her career. Lorelei Lee usually has to be carried through singles matches by her opponent, but now she is put in the unique position of having to carry somebody else. I knew the match would be interesting. Matthews worked her tail off and made me eat my words, as she actually looked like she belonged in a SHIMMER ring en route to picking up her first victory in SHIMMER competition.

SINGLES MATCH
Jetta (w/the Minnesota Home Wrecking Crew) vs. Daizee Haze: Jetta was accompanied to the ring by a couple of wet dreams by the name of Rain & Lacey. Jetta fits right in with the Minnesota Home Wrecking Crew, because she is equally hot as she is evil. I can’t believe this match was booked so earlier on the card, as it is a main event quality match-up. I guess they are still building Jetta up in the eyes of the fans. The Home Wreckers abducted Daizee’s flowers before the match and Jetta rubbed them all over her arm-pits and boobs – look out eBay. Daizee responded by swiping Jetta’s warm-up sweater and doing some kind of Irish jig on top of it. Eventually the pre-match shenanigans came to a halt and a wrestling match ensued. Jetta got the best of the Haze, but the flower-child prevailed with the Yakuza-kick/Mind-trip combination to send Jetta back to the UK with a disappointing loss.

IN-RING INTERVIEW
Becky Bayless & Allison Danger: Allison Danger came out with her arm in a sling, due to an injury she suffered on Volume 17 in the main event. I thought it was strange that Allison’s sling was just an old towel, until I realized that Volumes 17 and 18 were taped on the same night and she didn’t have time to go to the hospital. Danger blamed her broken collarbone on Cheerleader Melissa‘s Air-raid Crash. Danger said she will be out of action for a few months, but still doing commentary and helping the girls in the back get to the top of SHIMMER.

TAG TEAM MATCH
The Experience (Lexie Fyfe & Malia Hosaka) vs. Jennifer Blake & Danyah: Malia Hosaka is no teaming with Hillary Clinton; oops, my mistake… that’s Lexie Fyfe! Their opponents were a couple of Canadian fire-crackers named Danyah and Jennifer Blake. God bless the Canadians! The two young spitfires from the North tried so hard, but were not successful against their more experienced opponents. Fyfe & Hosaka pick up one more victory as SHIMMER inches towards the SHIMMER Tag Team title tournament.

SINGLES MATCH
Portuguese Princess Arial vs. Cat Power: Hey look, another Canadian makes her debut in SHIMMER. You can never have too many Canadians on your team. This would be my first exposure to the bitter-faced Cat Power, who is built the way a pro-wrestler should be built. Ariel seems to be on a roll, picking up a nice victory here against the debuting Cat Power. I don’t think Ariel will ever make it to the main events, but she is definitely graduated from the low-card position and knows how to deliver solid mid-card matches on a consistent basis.

SINGLES MATCH
“The Latina Sensation” Mercedes Martinez vs. “The Definition of Technician” Cindy Rogers: Cindy Rogers is coming off a loss to Daizee Haze, and Mercedes Martinez won her first match back from injury over Wesna Busic. Obviously both women desperately needed to pick up a win at this point. Martinez handed Rogers her second consecutive loss, a rare occurrence in the career of the Definition of Technician!

TAG TEAM MATCH
The Minnesota Home Wrecking Crew (Lacey & Rain) vs. Ashley Lane & Neveah: Lacey & Rain were wearing their “silicon free” shirts as they were accompanied to the ring by their British doppelganger, Jetta. This trio of flesh really has a good time teasing the fans during their extended entrance. Ashley Lane & Neveah are a couple of Ohio-based tiny blonds who could be the stars of any young man’s dreams. The Home-wreckers could easily eat these two little girls alive, but it was their job to make the rookies look good and get them over with the fans. Looks can only get you so far. In what has to be the biggest upset in SHIMMER history, the Ohio Girls scored a shocking victory over the firmly established team of Home-wreckers!

SINGLES MATCH
“The Croatian Panther” Wesna Busic vs. Amazing Kong: I was a huge fan of Wesna before I even got to see her wrestle, then I saw her on a ChickFight DVD and became an even bigger fan! I was so thrilled when I heard she was coming to SHIMMER for Volumes 17 and 18. Wesna delivered a solid performance on Volume 17, in a losing effort to Mercedes Martinez. The Croatian Panther has to be one of the greatest nicknames ever in wrestling. Commentator Allison Danger explained that Wesna & Kong were teamed up in Japan apart of a larger faction. This fantastic back-and-forth hard-hitting contest ended with an Awesome-bomb, putting Wesna down for the three-count. Wesna goes back to Germany as a two-time loser, so unfortunately I don’t expect her to be returning any time soon – otherwise they would have started building something with her. That’s too bad because she sure knows how to work.

SINGLES REMATCH
Cheerleader Melissa vs. “Dark Angel” Sarah Stock: This would be a rematch from the SHIMMER title tournament, where the Dark Angel knocked the Cheerleader out of the tournament in the first round! They showed highlights from that match on Volume 11, which featured Sara Stock wearing the skimpiest most distracting wrestling outfit I’ve ever seen on a female wrestler who basis her work on wrestling ability. So hot. Stock possesses a lethal combination of power and beauty. Did I mention she is Canadian? Cheerleader Melissa, who used to be a fake Canadian, was as beautiful as she has ever been. Those eyes could make Melissa a lot of money some day. Not sure if this was planned, but both girls were wearing gold and purple ring gear. Alright enough with the fashion and cosmetic observations, because fans were psyched to watch two beautiful women beat the living snot out of each other. The two brawling beauties engaged in an elegant game of human chess – well chess with bruises! Late in the match, Stock barely avoided the dreaded Kudoh-driver, but moments later was planted by the second attempt at the dangerous finishing move to give Melissa the victory and even the score at one a piece. It’s the third time Melissa has used the Kudoh-driver in SHIMMER and the third time she has used it to win! Will SHIMMER fans be treated to a rubber match at some point in the future? We can only hope and pray.

SHIMMER TITLE MATCH
Sara Del Rey (Champion) vs. MsChif: The announcers tried to cast a shadow of doubt over MsChif getting her title shot, saying she had a considerable amount of help from Cheerleader Melissa during Volume 17’s main event. It was a battle of who could hit their finisher first; MsChif’s Desecrator and Del Rey’s Royal Butterfly, have proved to be two of the most significant finishing moves by any SHIMMER competitor. After jockeying back and forth, MsChif suddenly hit the Desecrator out of nowhere and stunned the crowd by getting the 1-2-3 and winning the coveted SHIMMER championship!!! Dave Prazak proclaimed, “we’ve got a new champion, and her name IS MsChif!!” I wouldn’t have personally picked MsChif to be the one to finally dethrone the American Angel, but you cannot deny MsChif’s impressive track record. She should make a very respectable SHIMMER champion. All the best to her as she begins her reign as the defender of the greatest prize in women’s wrestling. With three hours of solid matches and an important SHIMMER title switch, Volume 18 is a definite MUST SEE for all SHIMMER wrestling fans.