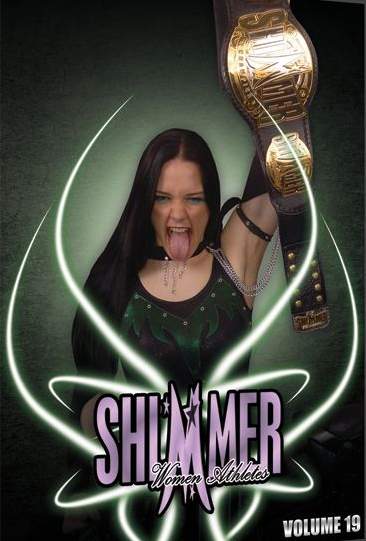 21-WOMAN BATTLE ROYAL
[ BUY ONLINE ]
Won by Jetta: The twenty-first edition of SHIMMER Women Athletes began hot and heavy with a gigantic women’s Battle Royal, with the winner earning a shot at the SHIMMER championship in the main event. It was more like a royal rumble (gauntlet) starting with two competitors, who will be joined by a new participant at thirty second intervals. The ring announcer was doing his best Howard Finkel impression. Entrant number one was Portia Perez, followed by entrance number two, Serena Deeb – who is starting to resemble a post-WWE Dawn Marie. Next to enter the match was “Girl Dynamite” Jennifer Blake. Followed by Nicole Matthews, who just happens to be Portia Perez’ tag team partner. Number five was Shark Girl, who is Daffney under a mask for those who may not recognize her unique figure. The next athlete to hit the ring was Nova Scotia’s own Cat Power. Moments later, International Home-wrecker Jetta entered the match. LuFisto returned to SHIMMER as the next contestant, and she has a funny Anime gimmick now. The debuting Veronika Vice was out next. She came up in the biz with Nicole Matthews in British Columbia. Shark Girl was eliminated by Portia Perez. Cat Power was eliminated by Serena Deeb. The Portuegese Princess Ariel was the next entrant into the match. Nicole Matthews was eliminated by Ariel. The other International Home-wrecker, Rain, entered next. Veronika Vice was dumped over the top rope by LuFisto for a short outing. Lorelei Lee slipped into the ring with a bit of a modified look since the last time I saw her. Cheerleader Melissa appeared from behind the curtain and business was about to pick up! Ohio-girl Neveah entered the match. Big meanie Sara Del Rey showed up at this point, looking scary with her new ultra-heel gimmick. Allison Danger was the next entrant. Serena Deeb was eliminated. LuFisto was eliminated by Del Rey. The next to enter the match was Canadian fitness model Danyah. Rain was eliminated by somebody. The next to make her mark was Ohio-girl Ashley Lane. There was a buzz throughout the building as Amazing Kong hit the ring. Danyah was eliminated by Kong. Danger was eliminated by Kong. Melissa was eliminated by Kong. Mercedes Martinez quietly entered the match while Kong was going crazy. Lane was eliminated by Kong. Perez was eliminated by Kong by pressing her over the top rope onto everybody else! Martinez, Del Rey, and Ariel teamed up to dump the massive Kong over the top rope! Nikki Roxx entered the match as the final entrant. Martinez, Del Rey, Roxx, Jetta, and Ariel were the final five. Del Rey back-dropped Roxx to the floor, resulting in a round of boos from the disappointed crowd. Martinez was flung over the top rope by Del Rey too. Ariel snuck up behind Del Rey and flipped her out of the ring to end her reign of dominance. Jetta won the Battle Royal after an angry Del Rey pulled Ariel to the floor and in a fit of rage power-bombed her against the guard rail!

INTERVIEW SEGMENT
Becky Bayless interviews Daizee Haze: Daizee was in her street clothes looking really cute. Daizee explained that she was injured and could not compete tonight. Daizee talked about training at the Ring of Honor Academy. Daizee talked about going to the doctor and finding out she injured her ribs. Daizee promised back by Volume 21 the crowd showed their support for the Haze, who fought back tears. So cute.

SINGLES MATCH [ BUY ONLINE ]
Portia Perez vs. Shark Girl: Portia Perez made her entrance and found some time to yell at the fans around ringside. One fan held a sign that said “Portia is Freaking Awesome” but she did not show any appreciation. The International superstar was looking really cute, you know, for a heel. Her opponent was the bizarre Shark Girl, who, as we all know, is the lovable alter ego of Daffney. This would be an evenly matched contest. Portia immediately complained that the masked Shark Girl would not stop smiling at her. Both competitors were wearing pink and black, but probably for totally different reasons. After a tough match, Portia scored the pin with your feet on the ropes for leverage. Classic.

SINGLES MATCH [ BUY ONLINE ]
Serena Deeb vs. Danyah: Canadian fitness model Danyah danced her way to the ring for her match with Serena Deeb. It looks like Deeb has bigger boobs, but I don’t know for sure. Maybe it’s just her new ring gear. Deeb has also adopted a more aggressive style, and is clearly trying to earn a spot in the main event.. Danyah, on the other hand, is trying to earn a permanent spot on the SHIMMER roster. Serena used the Spear (reminiscent of a GORe) to put Danyah down for the count..

TAG TEAM MATCH [ BUY ONLINE ]
Ashley Lane & Neveah vs. Cat Power & Veronika Vice: Veronika Vice came out with Cat Power for a tag team match against the Ohio-based blonde sensation tag team Neveah and Ashley Lane. Vice and Power are an interesting pairing, since they represent the East in West coasts of Canada. Cat Power is particularly interesting to me since she has a good look, is well-built, and has decent talent for the most part – so she should be going places someday. The tag team division in SHIMMER is just heating up, due to the upcoming creation of the SHIMMER tag team championships. Neveah and Lane proved to be superior tag team specialists with an impressive victory over the Canadians.

SINGLES MATCH [ BUY ONLINE ]
Amazing Kong vs. Lorelei Lee: Lorelei Lee skipped her way to the ring wearing sexy new ring gear. Seems like a lot of these SHIMMER have taken it upon themselves to develop physically and cosmetically over the recent volumes. Lee had her work cut out for her, as she would be facing the enormous Amazing Kong. This match had no business lasting longer than five seconds, but Kong was instructed to make Lorelei look good. Kong toyed with the Country Girl, dismantling her one body part at a time. Lee managed to hit some brief offense, but fell to a vicious back-fist from Kong. Poor Lorelei can’t catch a break.

SINGLES MATCH [ BUY ONLINE ]
Nikki Roxx vs. Nicole Matthews: They made a big deal about Nikki Roxx’s return to SHIMMER. Roxx looks like Roxxi from TNA, but acts like the old Nikki Roxx we all love from the independent circuit. She was facing the young rising star known as Nicole Matthews, who ironically had to change her name from Nikki to Nicole due to Roxx using the name already. Matthews is growing by leaps and bounds as an in-ring competitor. What else would you expect from a Canadian? Matthews botched a couple spots, but Roxx did her best to make her look great. Roxx finished young Nicole off with a Barbie-crusher.

SINGLES MATCH [ BUY ONLINE ]
Allison Danger vs. “Girl Dynamite” Jennifer Blake: Canadian hottie Jennifer Blake models herself after her nickname, Girl Dynamite, but she had her work cut out for her going up against SHIMMER’s good will ambassador, Allison Danger. SHIMMER is doing an excellent job elevating its new-comers by pitting them against established stars like Roxx and Danger. How can you not love Girl Dynamite? She’s just so darned adorable. Both girls showed a tremendous amount of sportsmanship early in the match. Late in the contest, Blake summoned the spirit of Kenta Kobashi and unleashed a flurry of slaps the chest of Allison Danger. Ouch. Danger rebounded, and moments later rolled Blake up for the 1-2-3 to win the match. Danger helped Blake up and praised her for a good performance. Allison started to hype the Canadian talent on the SHIMMER roster, and was quickly interrupted by the Canadian Ninjas (Portia Perez & Nicole Matthews). Perez, who brings a chocolate chip cookie to the ring with her, has a long-standing feud with Danger. Perez took offense to Danger judging who the best Canadian talent was. Perez called Danger as “Diet Canadian” with no talent. Nicole Matthews challenged Danger & Blake to a tag team match to see which Canadian team was “freaking awesome.” The match was set for Volume 20.

SINGLES MATCH [ BUY ONLINE ]
LuFisto vs. Rain: Business picked up when hardcore icon LuFisto took on International Home-wrecker Rain in singles competition. They also made a big deal out of LuFisto’s return to SHIMMER action. SHIMMER fans have not witnessed LuFisto’s hardcore style first hand, but that’s okay because she has superior technical skills as well. Rain targeted the back, which is a common strategy used by LuFisto’s opponents. Rain put up a good fight, but did not survive the Burning Hammer from LuFisto.

SINGLES MATCH [ BUY ONLINE ]
Sara Del Rey vs. “The Portuguese Princess” Ariel: I am blown away by the heel transformation of Sara Del Rey. She is kind of like the female Undertaker of the independent circuit. Del Rey aggressively attacked Ariel before the opening bell, seeking revenge for what Del Rey perceived as a stolen victory in the Battle Royal. Dave Prazak wondered out loud, “what has gotten into Sara Del Rey?” Ariel was coming off an amazing performance, in a losing effort, to the Amazing Kong on Volume 17. Ariel is getting a reputation for taking on monsters, taking a beating, and never giving up. She is SHIMMER’s answer to Tommy Dreamer. The finish saw Amazing Kong end the match with an Amazing-bomb on the Portuguese Princess.

SINGLES MATCH [ BUY ONLINE ]
Cheerleader Melissa vs. “The Latina Sensation” Mercedes Martinez: Two of my all time favorite female wrestlers squared off in a SHIMMER ring. I knew that it would be a hard-hitting technical masterpiece when cheerleader Melissa took on “Latina Sensation” Mercedes Martinez. These tough female fighters began their match with a handshake, and then got down to business on the mat. Commentators Prazak and Danger stressed the importance of both women wanting a shot at the SHIMMER championship. Melissa has always been in great shape, but has recently hit the gym hard an enhanced herself physically. Danger talked about Melissa’s unadulterated creativity when it comes to offensive innovation. Both women are known for their fatal finishing maneuvers; Melissa with her devastating Kudoh-driver, and Martinez with her bone-crunching Fishermen’s Buster. They battled over who could hit their finish first, and it was the Latina Sensation planting the grappling Cheerleader with her trademark Fishermen’s Buster. There was a show of good sportsmanship from both fighters after the match.

SHIMMER CHAMPIONSHIP MATCH [ BUY ONLINE ]
MsChif (champion) vs. Jetta (Winner of the Battle Royal): It was main event time, as MsChif defended her prized SHIMMER championship against the winner of the Battle Royal that took place earlier on the card. Jetta is an interesting heel from Great Britain, but she is not ready to carry the SHIMMER belt. They stretched out the match and made it entertaining for the fans, but everyone knew the eventual outcome. MsChif used the Desecrator to retain the SHIMMER championship.