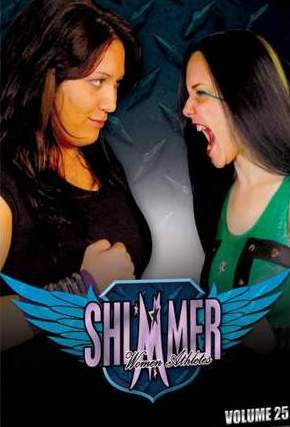 SINGLES MATCH [ WATCH ONLINE ]
Jetta w/Lacey vs. Tenille: Lacey led the International Home-wrecking Crew to the ring and together they generated a crazy amount of heel heat. The Home-wreckers were wearing masks to protect themselves from the Swine Flu or any other infectious diseases that may be floating around the “disgusting” Berwyn audience. Rain was sent backstage because she didn’t have a manager’s license. Tenille is probably the cutest wrestler I’ve ever seen, but don’t let her looks fool you. She was trained by Lance Storm, so she has the skills and is growing as an in-ring competitor very quickly. They went back-and-forth for five minutes before Tenille picked up a surprise upset victory over Jetta! Rain returned to the ring to help Jetta & Lacey issue a bitter post-match beat down on Tenille. They demolished her, and then Jetta covered her while Lacey counted the 1-2-3 herself. The Home-wreckers pretended that the won, and proved to be sore losers tonight!

4-CORNER SURVIVAL
Kellie Skater vs. Portuguese Princess Ariel vs. Cat Power vs. Rachel Summerlyn: I don’t really have any interest in Rachel Summerlyn. Ariel seems to be old news at this point, but the crowd still loves her to death. I am enjoying the fresh meat from Australia (Kellie Skater), but my favorite has to be the sexy Nova Scotian, Cat Power. The pressure was on the Cat to pick up a victory, and she rose to the occasion, forcing Summerlyn to tap out to put an end to the match! Cat Power continues to climb (or claw) her way up the rankings in SHIMMER.

SINGLES MATCH
Nikki Roxx vs. Melanie Cruise w/Annie Social: Annie Social said that Melanie Cruise was training with Wesna, and then they showed some footage of Wesna teaching Melanie how to be more stiff with her offense. The crowd loves Nikki (ROXX!) just as much as they hate anything associated with Annie Social. Melanie is developing as a wrestler and doing a fine job so far. She showed improvement, but was unable to pull out a victory, as she was finished off by Roxx’s trademark Barbie-crusher.

SINGLES MATCH
Rain w/Lacey vs. “Girl Dynamite” Jennifer Blake: Lacey led her the Home-wreckers back to the ring, bringing a boat-load of heel heat with them as usual. For some reason, Rain & Jetta were wearing one-piece pajamas, looking ridiculous. Thankfully they each took them off when it came time to wrestle. Just like in the first match, Jetta was sent backstage because she didn’t have a manager’s license. Girl Dynamite lit her fuse and exploded on Rain as she was goofing around with the crowd before the match. It was a hard-fought match until Lacey caused a distraction which directly resulted in Blake losing focus and losing the match to Rain!

SINGLES MATCH
Cheerleader Melissa vs. “Everybody’s Favorite Girlfriend” Jessie McKay: Jessie McKay is another import from the great land of Australia. I love seeing the fresh talent coming in from all over the world to compete in SHIMMER, where they are allowed to actually get over and be stars. Dave Prazak called it a “tremendous opportunity” for McKay, while co-announcer Portia Perez called it a “tremendous opportunity to get killed by Cheerleader Melissa.” SHIMMER likes to book “old vs. new” matches, and in almost all cases the veteran makes the new blood look really good. The old blood usually gets the win, but in a small percentage of matches, the rookie scores an upset victory. This is why you can never predict the outcome of a SHIMMER match. Melissa won this particular match, but Jessie McKay was put over like a rising star, and Melissa showed respect when it was all said and done. That’s how you groom talent.

SINGLES MATCH
LuFisto vs. Amber O’Neal: LuFisto is adored by the fans and she got the pop of the night (so far), as the fans begged her to “kill the rat” – in reference to Amber O’Neal. Oh never mind, they were saying “kill the ref” – in reference to referee Andy Long. My apologies to the rat. This match saw two veterans go at it, but it was the Japanese Hardcore Anime LuFisto who came out on top and declared the winner. After the match, the referee offered to shake hands with LuFisto, but she “stole his nose” and playfully booted him out of the ring.

GRUDGE TAG TEAM MATCH
Allison Danger & Daizee Haze vs. The Canadian Ninjas (Portia Perez & Nicole Matthews): This feud between Allison Danger and Portia Perez has gone on for well over a year, and is set to come to a close soon with a bloody showdown. Allison & Daizee are really the true ambassadors of SHIMMER. Every time I see Portia Perez wrestle, I can’t help but be reminded that she is one of the greatest women wrestlers on the planet today. I hope she gets a shot at TNA or WWE some day. There wasn’t a massive amount of heat for this match, as they are still building towards the climax. Allison is clearly still battling with some baby fat (having given birth two months before this match). The heat was turned up after the match when Portia and Allison started fighting, leading to Allison being choked with Portia’s belt.

SINGLES MATCH
“The Latina Sensation” Mercedes Martinez vs. Serena Deeb: This was one of Serena’s last matches before she signed her developmental contract with WWE and reported to FCW in Tampa. It’s funny to look back and see how much Serena has changed physically in just one short year – and I’m not just talking about her hair. At this point they didn’t know Serena was WWE-bound. She has just come off a year-long climb to the top of SHIMMER, only to fail in her attempts to win the SHIMMER championship. The ongoing storyline had Serena starting to climb up the rankings again to get another shot. She was taking on world class phenom, Mercedes Martinez. After a long amazing back-and-forth match, it was Serena with her arm raised in victory. Martinez applauded and showed respect for the woman who just beat her.

SHIMMER TAG TEAM TITLE MATCH
Ashley Lane & Neveah vs. Sara Del Rey & Amazing Kong: Ashley Lane is otherwise known as Madison Rayne in TNA. It’s kind of silly that these two short skinny blondes are the champions of the Tag Team division. It’s scary that they have to defend against two reckless monsters in Kong & Del Rey. I was sensing a title switch or a disqualification finish. Both Kong & Del Rey want the SHIMMER championship, but have gone on record saying if they can’t get it then any gold will do. This match was equivalent to feeding time at the zoo, as the team of monsters destroyed the champions with extreme force until the referee finally disqualified them and threw the match out. Eventually, Serena Deeb & Mercedes Martinez hit the ring to save the unconscious Ohio Girls.

SHIMMER CHAMPIONSHIP MATCH[ WATCH ONLINE ]
MsChif (c) vs. “The Croatian Panther” Wesna w/Annie Social: They showed a series of clips featuring Annie Social appearing on the scene and guiding Wesna to a bunch of controversial victories which led to Wesna being granted this shot at the coveted SHIMMER championship. On paper this looks like a really interesting match, and as is the case with most SHIMMER main events, it was sure to pay off. The match was intensely competitive and had the fans on the edge of their seats. It took two Code Green’s and a Desecrator for MsChif to finish off the “Croatian Panther” and retain the SHIMMER championship!