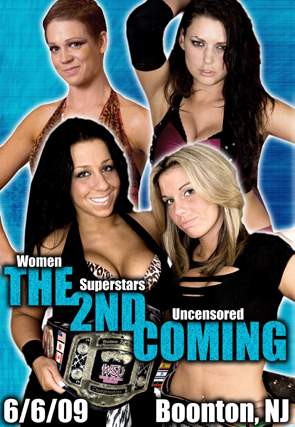 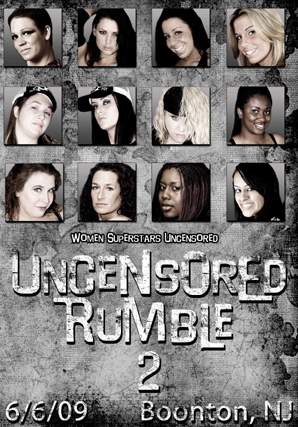 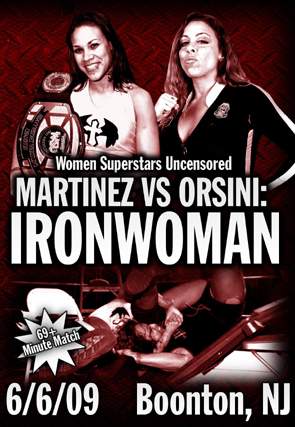 On June 6th Women Superstars Uncensored held a DVD taping so big and important, it took 3 DVD’s to cover it. All three are good on their own. First up is The 2ND COMING with the following matches:
?
For The Rights To The Beatdown Betties: Annie Social & Roxxie Cotton vs Rick Cataldo & Sean Hanson

Return of a Champion: Nikki Roxx vs Rain

I will not break each match down, other critics do that and more power to them. The best matches on this DVD are the tag title bout and Rain/Roxx. The super tag match was a bit long but then again it did have a dance-off which was solid. Who is Big Van Missy, you’ll have to watch to see. Usually I enjoy watching Social/Cotton wrestle but this match with Cataldo/Hanson is totally stolen by Missy Hyatt who does solo commentary. All of it leads to the next DVD the UNCENSORED RUMBLE 2 which had the following superstars involved:

This is like that other Rumble event, battle royal rules with a competitor entering ever so often. Good match with a weird shoot promo from Amy Lee. I am not too sure what to think after seeing it. If you don’t buy the DVD find it online somewhere. Seeing some of the tag wrestlers fight for themselves was also good. This leads to a match so important in the realm of women’s wrestling as Mercedes Martinez put her WSU Womens championship on the line against the former champion Angel Orsini with Iron Woman rules. No matter how many DVD’s or PPV’s you watch this year none of them will have a match like this. These two women wrestled each other for 60 minutes. That’s a full 60 minute match without beautiful entrances or diva pomp and circumstance. This match was in, out, around and sometimes nowhere near the ring. I’m talking brawling in the crowd, the balconies of the venue and even outside on the ring t ruck. Both ladies deserve respect and they certainly have mine.

According to their website www.wsuwrestling.com you can attend a DVD taping on Friday August 14th in Belleville, NJ where you will see a mini-tournament to crown the 1st WSU Spirit champion and Saturday August 22nd in Boonton, NJ where WSU Women’s champion “Latina Sensation” Mercedes Martinez take on #1 contender & former champion Nikki Roxx.

Alan Wojcik is a Florida based reporter who has covered professional wrestling since 2001. Information can be found on http://alanwojcik.com