Edge – A Decade of Decadence 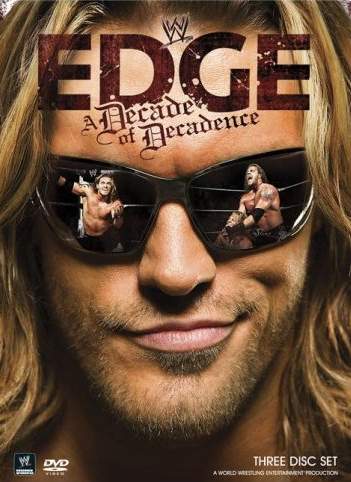 The latest WWE production is loaded with almost nine hours of great wrestling matches within the last ten years in the career of Adam Copeland, better know in wrestling circles as now “The Rated-R Superstar,” Edge. From his first match trying out in a WWE ring with a live audience prior to a television taping vs. Christian (believe it or not), to this past year’s SummerSlam (2008), this three-disc collection has 28 matches (in chronological order) displaying the evolution of Edge in throughout the last decade. Edge is your sole narrator guiding you through his battles & remains totally in character throughout his match journey. In this series, the action far outweighs the drama though, as you are not treated to anyone else getting their say, nor are you explained very much of anything, as these matches just role one after another with very little explanation. The narrative portion many viewers are accustomed to with WWE Home Video, with the exception of only the first three minutes of the first disc, is simply not there this time. I am guessing this DVD style was not the time to go in depth of the character Edge, as he will be for that sometime in the future, as this red hot heel should have plenty more solid years in the business to go back & review the life story.

Yes, the WWE once again produces state of the art presentations with their well-worked video projects, however this one really was an easy one for them. Laying out all the matches, mix in a dozen or so excerpts of Edge talking about himself, & adding in a few production packages detailing an upcoming match, and that is about all there is to this one. The video quality is well-preserved, but quality loss can easily be noticed this time. Everything from last year (2008) shot in High-Definition (that you will see some of on Disc III) makes you realize that as nice as the footage looked at the start of the first disc, it pales in comparison once high definition is seen at the end — which makes WWE’s huge investment with their latest technology a solid thumbs-up. I do not know what happened in the ECW One Night Stand 2006 six-man match on Disc II, because this match was the ugliest WWE quality I have seen with pixilation all throughout & on-screen stutters. Very unusual to see this from the WWE video team, but with the exception of noticeable amounts of pixilation, they once again display very nice work.

There are only two matches as well, as Edge & Christian video packaged together that are given to the viewer in the DVD’s. “The Totally Awesome Best of Edge & Christian” skits are highlighted for almost six minutes & show the duo in many of their memorable comedy skits/catch-phrases. These are contained at the end of Disc I.

On Disc II, Edge breaks out of character for the only few times in two matches that he provides commentary on which is very interesting & different. The first is his tryout match in Toronto vs. Christian, which he almost embarrassingly talks through with Matt Striker, who told Edge that we were all witnessing “Glimmers Of Superstardom.” The second match is from Toronto as well. Never-before-seen footage of Edge wrestling Jeff Jarrett, where he became the WWE Intercontinental Champion for the first time is now seen first-hand. These two matches are the only matches that you probably have never come across if you have been following the career of Edge, and that makes the few choices a fair bonus for me, considering the fact that it is hard to fit anything else on top of the nine hours of video that these DVD’s already provide.

Edge will introduce the viewer to what will be the greatest showing you will ever see. He has his popcorn & easy chair, and in-character will host you into a huge amount of great matches with top talents of the past ten years in World Wrestling Entertainment. From his first PPV debut against a ring-technician in Owen Hart, you will go into a couple of the craziest Ladder Matches to “This Day In WWE History,” with both The Hardy Boys & The Dudley Boyz. You will see the high dives, broken tables, hard shots, & indestructibility that these guys demonstrate, while also realizing that in Edge’s early years that he clearly was going to turn out to be a huge future star — which we all know now is true. There are a few Intercontinental Title Matches, WWE Tag Team Title Matches, Hardcore Tag, Hair, & World Heavyweight Championship battles that are shown from a guy that has held all six major belts now in a WWE ring. Even a nice battle with Mr. Perfect is dug up from Sunday Night Heat, where they work their asses off with each other & bring out their best. If you are looking for some explanation as to why some of these matches are happening, you will not get any of that. If you are waiting to hear about Lita & why Matt Hardy is in a feud with “The Rated-R Superstar,” well that is plainly ignored. Many portions that need an explanation simply are not given one, and this makes the DVD feel incomplete & can easily frustrate the hardcore viewer. The WWE to me did a very lazy job when putting this together. I mean, not even one other person, one agent, a family member, or anyone is inserted to talk about Edge & share a story — which could have benefited the viewer a little more.

The match selections are as good as they get, although any “Edgehead” who has followed his career probably has seen almost all of them already. Here’s the list:

If you want to see some of the greatest wrestling matches of the last ten years, and you are a long-time fan of Edge & really like his character, this DVD will provide you with plenty to cherish & belongs in your own personal wrestling library…Mildly-recommended.

While we have certainly gotten better WWE career compilations in the past, The” Decade Of Decadence” should still satisfy its audience. With only ten years now in the business on a national level, we can only wonder what the next ten years of “The Rated R Superstar” will bring to us in his wrestling future.

This DVD was reviewed By “Wild” Bill Brown. Visit the official website & MySpace pages of The Mayhem’s official DVD reviewer at www.BBrownVideo.com & www.MySpace.com/BBrownVideo.