The Life and Times of Mr. Perfect 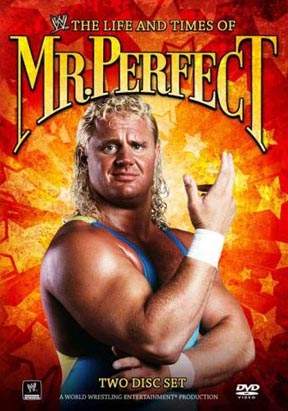 The Life and Times of Mr. Perfect
World Wrestling Entertainment

This DVD was like 2 years in the making. I first heard about it in 2006 that a Mr. Perfect DVD was in the works. The thing I love most about this DVD is it was very well done and included comments from people that knew him the most. You could really see how close his dad and he were because Larry the Ax does a lot of the talking about Curt. I loved some of the stories Greg Gagne has about Curt in the AWA and about how Curt thought he could hang with Nick Bockwinkle in the 1 Hour time limit match that he had with him. Curt went the full 60 minutes but learned a valuable lesson that night according to Gagne in the DVD.

It was really cool to see MLB Hall of Famer Wade Boggs in the DVD since they were such great friends. Wade talked about all the great times he had with Curt and how Curt saved his life once. The one totally cool thing about this DVD is that even though it’s a small thing, I love that Triple H, gives Mr. Perfect credit for helping him jumpstart his career in the WWE. It was Curt who Triple gets his first title in WWE. Mr. Perfect had a lot of great matches with a lot of different people. He is the best wrestler to not hold the WWE World Title but maybe someday a Hennig will.

There are 10 matches on the DVD and they are all awesome. I don’t think he ever had a bad match with anyone, but his matches with Bret Hart were spectacular. I also love his earlier days with Scott Hall. Funny when Razor Ramon came into the WWE, they downplayed that He and Curt had a past but didn’t mention what. They also downplayed it in WCW when Curt came in there too. Curt had some great battles with DDP in WCW as well

Curt Hennig was one of the greatest wrestlers of all time, if not the greatest in terms of in-ring ability. Even though he is no longer here I still remember the man that quoted himself as being “Absolutely Perfect.” His legacy lives on through his great matches and now his son Joe who is currently in FCW waiting to be brought up to WWE TV. I know Joe will continue on his father and grandfathers legacy for many years to come. This is another must have if you’re a wrestling fan, especially of the 80’s and 90’s. There only one Mr. Perfect and may his legacy live forever.

Two discs containing 360 minutes of stories, matches, clips, & memorable moments is what can be expected to be seen when you pick up WWE’s latest home video release. There are plenty of home clips of Curt all through his life & past his death. You’ll see ten of the best matches shown with this genuine star. There also is plenty of discussion coming from such ring greats as: Nick Bockwinkel, “The Nature Boy” Ric Flair, “The Heartbreak Kid” Shawn Michaels, Arn Anderson, Triple H, “The American Dream” Dusty Rhodes, & dozens of others — including former MLB star & Curt’s good friend, Wade Boggs. From hunting to fishing, wrestling to commentating, managing to singing, to being featured playing his practical jokes with many great stories, you will get a full dose of Mr. Perfect. When you watch this documentary, you’ll once again easily be reminded how awesome he really was. You will follow his life story, and every single minute is a great one to watch here.

A great presentation from the WWE. The Hennig vs Bockwinkel match had a rip through the picture towards the ending but for one straight hour that entire complete un-edited match was absolutely awesome to see again. The WWE’s documentary on Mr. Perfect’s life was edited perfectly in all the right ways, and the matches were re-mastered as if they were shot with the most modern upgraded equipment out there. I still wonder how they continue to keep there footage so clear looking.

Clear & crisp commentary during the documentary & matches. Dolby Surround in two channels. Accurate sound reproduced. The music selections throughout the documentary portion are perfectly blended, from the tunes in his highest points through his lowest, to then not having any music at all during the saddest portions of the DVD discussion, which was the family & those from the WWE all talking about Curt’s unfortunate passing.

Who will ever forget all the Mr. Perfect vignettes produced by the WWE? They are all featured within the DVD in the extras. You will also be treated to the catchy hit “Rap Is Crap” from The West Texas Redneck WCW days. The ribs that Curt was legendary for throughout his career were even demonstrated by an individual which was a riot just watching that in & itself. The matches are incredible, with half being from Madison Square Garden. The WWE Hall Of Fame Induction was fitting on this DVD as well — whether you saw it already or not.

Larry “The Axe” Hennig will be the man you listen to the most, as he lived during Curt’s entire life. All the Hennig family seem like a very close loving group of people, and you will hear stories from Larry starting, from getting Curt started, & even driving him to New York to meet Vince McMahon Sr. in the very early ’80’s. Larry was motivated by his son to step back into the ring, once Curt returned back in the Midwest in the mid-80’s, and enjoyed working again with him. Larry will take you through it all, as Curt became a superstar on a national level for many years, and even after when Curt was met with his untimely death.

Another person who makes you really understand more of Curt Hennig as a personal friend of his was Wade Boggs. You never would have realized how close they were, but you will find out during many tearful stories — where in one of them Curt saves Wades life, and now Wade makes mention that Curt is “his personal guardian angel.”

The behind-the-scenes shoots where Curt was showing his perfection and would mess up when the cameras were on during many of the vignettes were discussed, and many out-takes were shown. Curt’s reactions to his mistakes were priceless every single time. The ribs were also a riot, either clever or immature, but that was Curt just trying to have fun which is what he always tried to do.

Another good portion of the DVD was of the time he spent as a color commentator. His quick wit & funny lines were continuously mentioned about during these parts. You could tell Curt behind the microphone just loved to share his feelings and entertain his workers & the audience.

The way the DVD ended really left me confused though. The music got slower & sadder and then you read that he was released by WWE, went to work for local indy groups, but then suddenly for a few seconds they put a newspaper clipping of his death on the screen. The headline made mention of a possible cocaine overdose. Never in this documentary at any time was any mention of any drugs, but all of the sudden his possible demise was of a cocaine overdose. I understand also that the Hennig family probably isn’t comfortable in discussing this situation on camera, and therefore you will be left confused because not one word about any drug was thought upon. This is very different from the style of DVD when they featured Road Warrior Hawk, World Class Wrestling or Brian Pillman-type home videos. This left a very empty feeling, because I was on such a high for the past hour…and then this just put a halt to it all. In the end you may feel a deep sadness for everyone close to the Hennig’s who wishes that Curt was around today. Larry & Curt’s son (Joe) are shown, still hurt the most — because they both, in their own personal feelings, not only lost a very close family member, but also the best friend of their lives.

Three matches alone with Bret “Hitman” Hart, while one might complain, I certainly can not. Each one was a classic whether it was in the WWE or WCW. Seeing Mr. Perfect was a nice touch, and watching Hulk Hogan look like he knew how to wrestle, due to upping his level to not look bad with Curt, was really nice. His debut match in Madison Square Garden against Eddie Gilbert was a lot of fun to witness again, and his AWA Tag Team Match with Scott Hall vs Steven Regal & Jim Garvin showed there future potential to be the greats they became. There are only ten bouts shown though. My complaint is there should have been a third disc with at least ten more.

The best match they put on hands down was the AWA Championship Match between Champion Nick Bockwinkel & challenger Curt Hennig from Las Vegas, NV. Untouched footage for one straight hour, this is perhaps one of the greatest matches of any era.

Buy this DVD. This will be one that you will always love to go back to. There is no reason why you should not. There is a little bit of almost everything a fan needs included within the two-disc set.

Since I had been a Curt Hennig fan all of my life, I tried not to be biased. I almost wanted to give this DVD “The Perfect Score,” but there are a few things that I thought was missing in the ending. But aside from the one complaint of wanting more, WWE’s “The Life And Times Of Mr. Perfect” is indeed the perfect gift for any true wrestling fan.

www.BBrownVideo.com: For the quickest, the fastest, & for top-notch productions! For all of the best analysis from the world of professional wrestling & sports-entertainment