Home / Columns / Is It Too Much, Too Soon for Ronda Rousey in the WWE?

Is It Too Much, Too Soon for Ronda Rousey in the WWE? 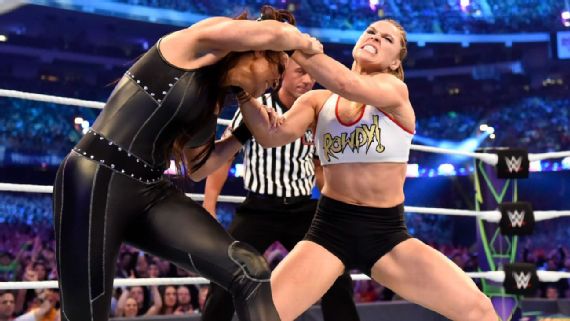 Is It Too Much, Too Soon for Ronda Rousey in the WWE?
By Tim Fiorvanti, ESPN.com

When you run down the list of the most prolific athletes the WWE has ever signed to a full-time contract, you’ll find numerous NFL players, Olympic wrestlers, collegiate athletes in a wide variety of sports and weightlifters with world records.

But when it comes to utter dominance at a professional level, perhaps only Brock Lesnar comes close to what Ronda Rousey accomplished before coming to the WWE. When she took the Strikeforce women’s bantamweight championship and carried it into the UFC to become the first women’s champion in that company, it wasn’t a ceremonial move by any means. Rousey walked through the doors of the UFC and became as dominant a champion as any other person who ever stepped into the Octagon.

After winning Olympic bronze in judo, Rousey ran through her three amateur MMA opponents over the course of five months with three first-round submissions via armbar in less than a minute. Five of her first seven fights went exactly the same way, with wins over Miesha Tate and Liz Carmouche taking until the final minute of the first round before Rousey finished them off.