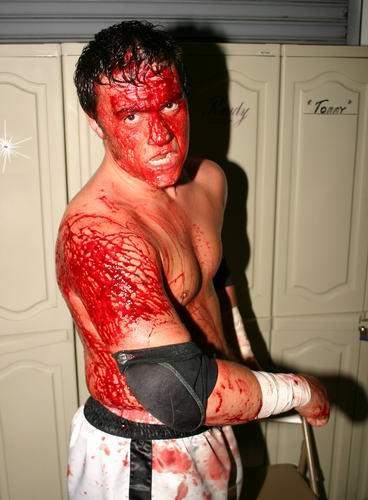 Freakshow emerged as the winner/survivor of the 2007 IWA Deep South Carnage Cup at the Nick Gulas Sports Arena in Pulaski, Tennessee.

Like last year’s Cup, no words can describe the atrocities to the human body that took place during this show. For me, it’s a flip of the coin as to which was the better of the two. The DVD will be available shortly through Smart Mark Video.

Unfortunately, this year’s show was marred by two serious injuries. Drake Younger went to the hospital after having his ear almost completely severed. Deranged suffered either a broken ankle, torn tendons or both.

The tournament format was different this year. The opening round was four three-ways with the loser of the fall eliminated. Then four singles matches in the semis leading to a four-way elimination match for the finale.

This year’s field of twelve was younger and arguably even more demented than in 2006. There were five returnees: Ian Rotten, Freakshow, Drake Younger, Tank and Insane Lane.

Rotten went out in the first round in what was billed as his final Death Match. Fans gave the legendary hardcore pioneer the streamer treatment.

Attendance was 75. Almost all hardcore fanatics and the loudest crowd of that size I’ve ever been a part of. Everyone was over with this crowd. Massive appreciation for guts, heart and the loss of any semblance of sanity.

Ring announcer Chris Castle dedicated the show to a Deep South fan named Matt that recently died in a car accident. Castle placed the Cup in Matt’s usual seat in the first row.

(1) Corey Shaddix beat Prophet with a cradle DDT into light tubes in Fans Bring the Weapons match at 7:25. Two guys from local affiliate, Full Throttle Wrestling in Elkmont, Al. Shaddix got the flow of plasma started within the first two minutes after a staple gun to the forehead. Shaddix also used Tank’s chokebreaker. With permission I hope.

The tournament got off to a spicy start when SeXXXy Eddie did his stripper routine with this hot Asian chick named Lorraine, who takes photos at all the IWA Deep South shows.

(2) SeXXXy Eddie & Scotty Vortekz eliminated Ultramantis Black with a double superplex through a light tube table in 11 minutes.Basic light tubes and wire boards for the opener. This had the best actual wrestling of any tournament match in 06 or 07. It my first time seeing Black. That’s a great entrance. Vortekz was super stiff. They did some hot near falls without the weapons. Black put Vortekz through a barbed table with a DVD off the apron. An insane spot. Vortekz’s back was a mess. Huge chant after the finish. What a way to start.

(3) Deranged & Danny Havoc eliminated Tank in a Lucky 13 match by the score of 13-12-12 to advance to the semifinals (12:30). First man to take 13 light tube shots loses. This was ten times better than the last year’s Lucky 13 between Necro Butcher and Mitch Paige. Tank has gone blonde. Bizarre though it may be, it’s a great look for him. This was his first match back the ankle injury at TPI. Deranged was coming off winning the IWA East Coast “Masters of Pain” death match tourney. Havoc set the tone for what turned out to be a very long and painful evening here. Unspeakable abuse. Tank smashed a tube into Havoc’s face with a uraken. Tank then curb-stomped Havoc’s head into the groinular region of Deranged. Deranged gave Havoc a sick pumphandle maneuver onto a chair and made a useless pin attempt. Deranged rammed Havoc’s head into a bundle of tubes propped against the post. Profuse blood flow from Havoc’s head. It was knotted up at twelve apiece. The finish saw Havoc poised to bust a tube on Deranged, but he caught Tank’s noggin on the backswing.

(4) Drake Younger & Viking advanced to the semifinals in 4:55. Whacks was pinned by Viking after executing the single most psychotic spot of the night. This seemed redundant because it was mostly guys getting bashed with more light tubes. Ahh, but then came the finish. Whack jumped from the top rope and grabbed the rafters. He swung trapeze style and did a senton onto Younger, who was laid out across two chairs with light tubes in his lap. A shard of glass slashed Younger’s ear. Younger is snake bit when it comes to injuries. His ear was said to be hanging like a piece of sushi.

(5) Freakshow & Insane Lane eliminated Ian Rotten in a Home Run Derby match when Freakshow pinned Rotten after a light tube shot to the groin (8:28). The standing O and streamers was a quite a shift from the fans’ feelings when Rotten exited from Deep South in July. It was time to swing for the fences — water jugs, thumbtack bats, barbed wire crutches, light tube crutches, and spike bats. Lane combed his hair with the spiked bat. I thought this match had the most blood, although that’s hard to say. Lane and Show had crimson masks. Show spit a mouthful of blood into the air. There was some sadistic stuff with the spiked bat and tack bottle. Show damn near knocked Lane out with a water jug shot. Rotten got his last licks with sick back and forth tack bat shots on Show and Lane.

Rotten said his goodbye to IWA Deep South. He credited his father, who grew up in nearby Shelbyville, for getting him interested in wrestling. Rotten made his peace with Freakshow. “You’re one hardcore motherf***er.” Rotten said Show was just doing what he had to do (by putting Rotten out of action with a spike to eye). Of Lane, Rotten said. “You’re not insane. You’re a f****** lunatic.” Rotten said they didn’t need any “NWA s***.” Rotten was also still pissed about the “jobber” making trouble for IWA Deep South (Mike Jackson who allegedly cost them their venue in Pell City). Rotten thanked promoter Kevin Brennen for putting his money where his mouth and heart were. Rotten closed with an FU for the doubters.

Intermission. Eddy received a bye to the finals because Younger was unable to continue in the tournament. Younger was seen heading out of the building with a towel wrapped around his ear.

(6) Chrisjen Hayme won a six way over Hydra and Funky Pharoah and Tim Donst and Southern Saints (Shawn Reed & Chris Styles) in 5:40. A well-executed and highly entertaining sprint. It was part of CHIKARA’s quickie tour of the South that included a Friday night stop in Tupelo, Ms. The highlights included a ridiculous six-way stunner spot. Hayme pinned Styles with a spike spinning headscissors.

And it was on to the semifinals…

(7) Freakshow beat Deranged in a Pits of Hell match (5:42). The deal was three kiddie pools at ringside: salt and barbed wire, rubbing alcohol and barbed wire, and tacks and tubes. God only know what all they had in mind. Deranged hiptossed Show into the pool of barbed wire and alcohol. Deranged did a legdrop off the apron. He f***** his ankle up bigtime on the landing. Show dropped an elbow through tubes for the pin. It was clear that Deranged was seriously injured. Dude was literally crying out in pain. They had to cut his boot off all the way down to the bottom of the laces. I believe Mike Burns did the honors.

There was talk of an ambulance, but Rotten said that would cost $700 and he wasn’t kicking in. They booted Deranged’s ankle. Huge round of applause as Deranged was loaded into the back of a van for the trip to the hospital.

(8) Vortekz pinned Viking in a Light Tube Log Cabin match with a Dragon Fly through one of the cabins (7:02). They lit each other up chops. Vortekz dropkicked Viking into one tube cabin explosion. Viking put Vortekz through another cabin with a side slam. The finish was a harrowing experience. Vortekz was left with a huge gash between his pinky and ring finger that necessitated a quick departure from the finale.

(9) Danny Havoc beat Insane Lane via submission in a Razor Board match (8:47). This was scary s*** after the injuries that had already occurred. There was my favorite match because it told the best story and had one hell of a dramatic finish. Havoc missed a couple of moves early and shrugged his shoulders. Lane introduced a pizza cutter and barbecue fork that he got from the crowd. That got a “Deep South” chant. A steel coffin of chairs was set up. Lane took a sunset powerbomb into a razor board on the steel coffin and kicked out. Havoc got a rear naked choke. The blood was flowing from Lane’s forehead like a river. Lane backdropped Havoc onto a barbed wire board, but he held the choke. Lanek backed Havoc’s back into a razor board that was propped up in the corner. Like four times. Havoc’s back was shredded but he wouldn’t let go. Lane went down and out with the crowd going berserk. Lane was beside himself for not making the finals. Huge show of appreciation for both.

(10) Freakshow beat Vortekz & Eddie & Havoc in a four-way elimination to win the 2007 Carnage Cup (17:58). This was the same 200 Light Tubeds match they did for the 2006 finale. Vortekz was holding is hand in such a way as to control the bleeding. He was eliminated in the first 30 seconds after Show smashed a bundle of light tubes on his hand and gouges them until he submitted. Eddy’s attempt at his signature trash can moonsault led to his downfall. Literally. Show put him upside down in the garbage can and they dropped him from the apron to the floor. Sbow pinned him at 8:37. It was down to Havoc and Show. Each guy put the other through a barbed wire tube table. Havoc stacked up tube cabins at ringside. Show cut him off with a pizza slicer to the forehead. Back inside the ring, they traded like 15 light tube shots to the head with the crowd split down the middle and going crazy. Show cut him off with a pizza slicer to the forehead. Show won it after giving Havoc a chokeslam off the ropes through three light tube cabins stacked on the floor. Nice cushioning. Chant of appreciation for all things Deep South.

Freakshow told Havoc he was a crazy little SOB. “Welcome to the South.” Show reflected on the great year he’s had and ran down the list of hardcore icons he’s defeated. He said Rotten was the king. Show then dedicated his victory to Younger and Deranged. The show ended with one last chant of “Deep South.”

NOTES: The next IWA Deep South show will be late February or early March. Location TBA…FTW returns to nearby Fayetteville, Tn on 12/15 with Chuck Taylor, Ricochet and midgets on the card…Rotten’s retirement match is set for the 12/7 IWA Mid-South show in Plainfield, In vs. Mickie Knuckles. Sandman and Too Cold Scorpio are also booked for that show…Knuckles, Anita Paige and “Towel Boy” Paul Adams (SAW) were in the building…Adams and Black were among the color commentators for the DVD.