Trump called Swagger to wish him luck in his second MMA fight that takes place this weekend at the Bellator 221 event.

Swagger wrote, “What an incredible honor. Just got off the ph. With @realDonaldTrump . He said good luck and said I was the second best Donald J in America but I have better Hair!!”

Swagger, who has not been shy about his support of the 45th President of the United States of America, is scheduled to fight TJ Jones at Bellator 221 at the Allstate Arena near Chicago on Saturday night. Swagger has a 1-0 record going into the heavyweight fight while Jones has a record of 1-1. Swagger made his MMA debut back on January 26 with a win over JW Kiser at the Bellator 214 event. Swagger won the fight by submission in the first round at 2:09.

Swagger spoke with The New York Post earlier this year about supporting Trump and his personal views.

“I’m a conservative,” said Swagger, who left WWE in 2017. “I voted for Donald Trump and back in 2016 everybody was talking about, “Oh my God, here’s another TV character trying to run for the presidency.” They didn’t really take him seriously. He made some outrageous claims like, “Make America Great Again” and build this wall and stuff like that. I was somewhat on the fence then but two years later going into his third year, I am so happy about the progress that he has made and I really don’t understand why so much of the media and everybody wants to portray him as such a negative president when it’s unprecedented what he’s done.”

Swagger also told Ring Rust Radio in 2017 that he once pitched a Trump storyline to WWE Chairman Vince McMahon a few years ago after Swagger had worked with Zeb Colter for the “We The People” gimmick. Swagger still shouts the line when making MMA-related appearances.

“Yeah actually it’s funny because I pitched an angle to Vince,” Swagger revealed. “Zeb was away, and I said let’s bring him back and let’s do a Donald Trump angle where we mimic everything he does, says and whatever he tweets. It’s essentially a storyline that would write itself and he wanted to stay away from it. I went to him and said, ‘Hey Vince, how would you like to put Donald Trump in the White House?’ So, maybe that wasn’t the best pitch.

“I thought it was really something special. I wrote it up and I showed Zeb and he added his little stuff to it and it could’ve really been explosive right now. There’s so much anger towards his tweets, towards him, his behavior, and that would’ve been like electric heat. I can’t even imagine it. It would’ve been good and just for the record, I pitched that in 2015. So as soon as he announced he was running I was like, ‘oh gosh, please let me get on this.’ That’s a great idea like, I got all the moves, I got all the good moves, that’s sad. I’m going to pause and start tweeting and make the whole audience have to read my tweets in order to see what I’m saying while I’m wrestling. You guys are going to have to give up royalties.”

You can see Swagger’s full tweet on the phone call from Trump below: 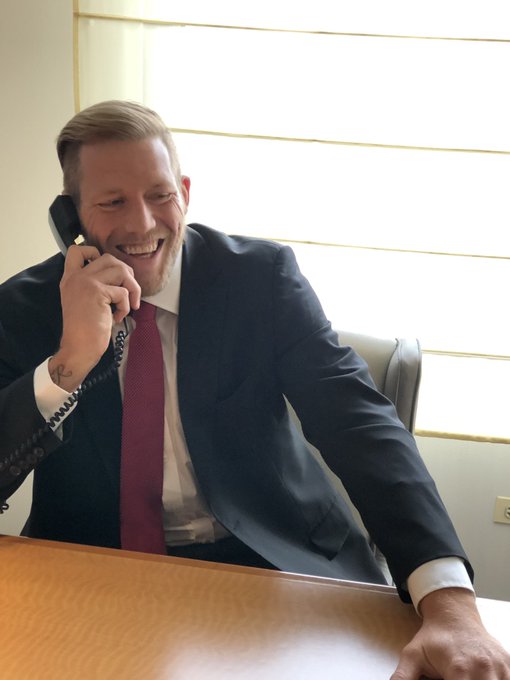