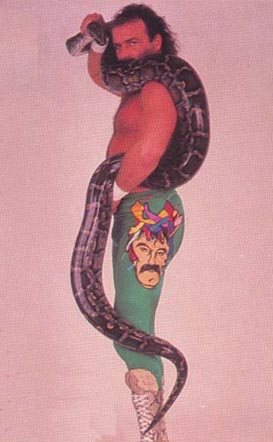 By: Bob Colling from http://wrestlingrecaps.wordpress.com/
(Over 840 shows have been recapped including WWE, WCW, ECW, TNA, ROH and other independent companies!)

Jack and OIB are joined by Jake “The Snake” Roberts for the third time. Jack mentions that Roberts has a retirement coming up in January. Roberts says the match will be taking place in Los Angeles and as much as he hates the fact he has come to terms that he needs to retire. Roberts came to the decision nine months ago that he needs to step out of the ring. Roberts notes some of the injuries he has suffered some injuries which include Roberts having part of his foot removed. Roberts talks about starting up a school in April which will not be easy and will be doing it his way.

Roberts calls high spots in wrestling to not be wrestling and simply says it is bullshit. Roberts’s school will be centered on actual wrestling. Roberts is not happy about how the school boy finishes matches that include DDT’s and sending someone through a table among other spots.

Roberts doesn’t believe that there are good or bad guys in wrestling anymore. Roberts thinks the main issue is that their aren’t any characters in wrestling.

TC Anderson asks if Roberts plans on writing a book. Roberts is writing two books, one about his career and another one about addiction. He will be writing the addiction book with his daughter. Roberts’s talks about enjoying smoking pot, and dope for the first fifteen years of his career. However, all of a sudden he couldn’t stop doing the drugs and needed the drugs which was a surprise to him. Roberts realizes that he is the poster boy for being a bad guy to do drugs.

Roberts does think that if he didn’t have the addiction he would have played a bigger role in the mid 1990’s boom in wrestling. Roberts talks about his supposed “friends” giving him stuff that he didn’t need. Roberts is fully behind WWE having a Wellness Policy. “As much as I hate to admit it, Vince McMahon has helped me tremendously.”

Roberts was not asked to do the Old School RAW back in November. Roberts believes that characters from his era are still over because how good his character and other people’s characters were.

Roberts believes its bullshit that WWE will not sign anyone over the age of 30.

Roberts’s retirement match will be at Wrestle Reunion against Sin Bowdee. Roberts plugs a tournament taking place in Texas where their will be 299 matches taking place over three days to set a record for the Guinness World Record.

Jack asks about Danny Hodge. Roberts shares a road story with Hodge about not knowing who the Assassins were while bad mouthing them right to their face! Also, Roberts talks about being at the show where Hodge broke his neck.

Roberts hates too many people to give only one person a “shoot DDT.”

Roberts is happy whenever someone does the DDT because fans remember him. “No one got up when I did it.”

Jack thanks Roberts for coming on to end a thirty minute interview!