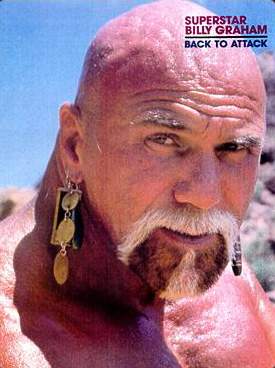 “Superstar” Billy Graham Discusses His Final Public Appearance At This Weekend’s WrestleReunion 5, The Latest On His Current Health Issues, Whether Or Not The WWE Has Made Many Any Recent Attempts To Reach Out To Him, Why He Wishes To Publicly Acknowledge The WWE Being “Really Good” To Him Over The Years Despite His Love/Hate Relationship With Vince McMahon & The Company, How His Faith Has Helped Him In Dealing With His Health Troubles, His Private Conversations With Eddie Guerrero On The Importance Of Religion & Faith Prior To His Passing, The Superstars Of The Past Two Decades Emulating Him, His Strong Influence On Hulk Hogan & Jesse Ventura, & What He Thinks About His Own Lasting Legacy In Professional Wrestling

WWE Hall of Famer “Superstar” Billy Graham was one of the featured guests on this week’s live edition (01/24/11) of the award-winning Monday Night Mayhem. You can feel The Mayhem every Monday evening (at 7PM ET/6PM CT), exclusively on The Monday Night Mayhem Radio Network (www.MondayNightMayhem.com).

Billy joined The Big Mosh & “The Chairman of the Board” Todd Vincent for this exclusive interview with The Monday Night Mayhem Radio Network, which is now available in Windows Streaming Media or via the official MNM Podcast on iTunes:

How much he is looking forward to his final public appearance this weekend at WrestleReunion 5, why “it’s not going to be a downer,” & having the opportunity to interact with his fans one last time: “For one thing, it’s not going to be a downer. I’m excited that I’m healthy enough to give the fans 100% of my attention, and certainly excited about meeting & greeting and signing autographs. Going to Los Angeles will be very exciting for me to see a lot of guys I haven’t seen in years along with the fans. I would have to say that the fans have been the ones really abused over the years. Thank God for shows like this, that’s it’s such a fan-friendly extravaganza than the old kayfabe days, where you treated the fans like they had the plague.”

How his faith has helped him in dealing with his recent illness/health troubles & his private conversations on the importance of religion & faith with Eddie Guerrero prior to his passing: “There’s no question that faith beyond this life has kept my spirits up, there’s no question about it. Faith is essential, and I know that Eddie Guerrero’s faith was enormous. I had the honor of having private conversations with Eddie about God, the hereafter, & our faith. He was so genuine, and it was just remarkable (his spiritual belief), even though we fall so short as human beings.”

Whether or not World Wrestling Entertainment has made any attempts to contact him recently since the announcement of his illness & why, despite a love/hate relationship with Vince McMahon/the WWE, he wishes to acknowledge publicly the company being “really good” to him on the overall: “Several folks in the office have been very nice to me and have been very sympathetic to my plight. I will go on record to say that despite the love/hate relationship that Vince McMahon & I have had, I will say that the WWE has really done nothing but good for me. They’ve made me money, they’ve made me a Hall of Famer, but I also made them a lot of money. I contributed to their success, but they have been really good to me, and as in any corporation, you will have issues with your bosses. That’s just a matter of fact.”

His thoughts on recent superstars emulating him over the past two decades, his influence on both Hulk Hogan & Jesse “The Body” Ventura, & what he thinks about his own lasting legacy in professional wrestling: “It’s great. I’m so proud of my legacy and extremely proud to have influenced folks who have turned out to be a Hulk Hogan & a Jesse “The Body” Ventura. What a compliment. The old school fans thought Jesse was trying to steal my stuff, and look like me, and talk like me. It’s a compliment that you have something good enough that somebody wants to use, and two of these people (Hogan & Ventura) became household names, and took my influence, and did it very well. I have no hard feelings about guys trying to emulate me, it’s actually a compliment when you get right down to it.”

More is contained in “Superstar” Billy Graham’s return to Monday Night Mayhem, including how he has personally been dealing with his recent health issues, the importance of not giving up when being faced with adversity, plus much more! Mayhem Nation: Get ready to be a part history, as “The Last Stop Tour” heads to The Hilton LAX in Los Angeles, CA this weekend for WrestleReunion 5! This is your chance to get autographs & photo-op’s with Billy & his fellow WWE Hall of Famers (Bret “Hitman” Hart, “Rowdy” Roddy Piper, Terry Funk, Harley Race, The Iron Sheik, Tito Santana, “Mr. Wonderful” Paul Orndorff, “Cowboy” Bob Orton, “Mean” Gene Okerlund, “The Mouth of the South” Jimmy Hart, & Mr. Fuji), current TNA Knockouts & former WWE Divas (Cookie, Christy Hemme, So-Cal Val, Tammy “Sunny” Sytch, Torrie Wilson, Maria Kanellis, Shelly Martinez, & Traci Brooks), plus many more superstars of today & yesterday. Purchase your WrestleReunion 5 tickets right now by heading on over to www.WrestleReunion.com.