Home / Columns / Jessicka Havok Is Ready To Stop The Rain!

Jessicka Havok Is Ready To Stop The Rain! 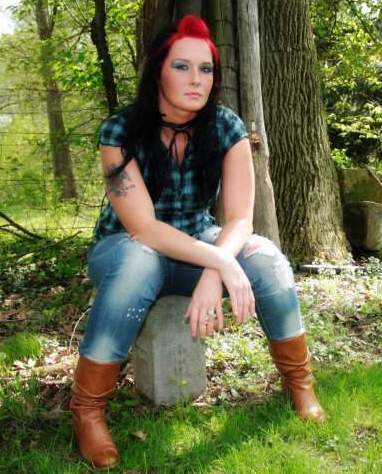 The Mid-West Invasion Continues:
Havok Is Ready To Stop The Rain!
Story by Jimmy Gentry for WSUWrestling.com

WSU is a womens wrestling company that prides itself in giving starts to the stars of tomorrow. It is a place where women wrestlers can be showcased like no where else. There are no limits and the wrestlers are given every opportunity to make a name for themselves. WSU prides itself in seeing new stars develop and watching talent grow with no handcuffs or restrictions. Sassy Stephanie is one of the wrestlers that has seen herself grow in WSU. Just like Stephanie, her mid-west peer, Jessicka Havok, is looking to make major headlines in womens wrestling through WSU.

Jessicka Havok, from Massilon, Ohio, seems to be on the verge of superstardom in womens wrestling. Originally entering WSU with tag team partner Hailey Hatred, as part of the Havok & Hatred tag team, Jessicka Havok wasted no time capturing WSU gold. In Havok & Hatred’s debut match in WSU, on 6/6/09, their debut was over-shadowed by the return of the original WSU Icon, Alicia. Alicia wound up being Brooke Carter’s mystery partner, as Alicia replaced Miss April, who left WSU due to receiving a WWE contract. Alicia & Carter would defend the titles successfully against Havok & Hatred, but Havok & Hatred weren’t going to be overwhelmed in a rematch.

With WSU being a place where all women wrestlers are given a chance to make a name for themselves, Jessicka Havok did just that. Havok quickly aligned herself with one of WSU’s biggest villains, “The Radiant” Rain. Joining Lacey, Nikki Roxx & Amber O’Neal, Havok would become the enforcer of the group. Havok would star in an 8-woman 4 vs 4 elimination tag team match on 6/26/10, when it came down to just herself against The Belle Saints, Sassy Stephanie & Latasha. Havok would defeat all four women by herself, earning the right to enter the Uncensored Rumble as the final entry. However, Havok sold her spot to Rain, as was her duty as the enforcer of Rain’s Army.

As time went on, fans and critics across the womens wrestling world all started talking about how dominant Jessicka Havok was. Havok, who sports an undefeated singles record in WSU, wanted bigger matches in WSU. On 11/6/10, at WSU’s first iPPV “Breaking Barriers”, Havok would get just that, as she called out the biggest & baddest WSU has to offer – “Pryme Tyme” Amy Lee. Havok would defeat Lee clean in the middle of the ring, to earn the right to be considered the biggest & baddest bitch in all of womens wrestling. But Havok wasn’t done there – on the “Martinez vs Rain II” event, Havok would defeat former TNA Knockout Champion ODB. Again this was a clean win for Havok, as Havok proved to the world that she could take on anyone, anywhere, and beat them with no tricks or tomfoolery.

As fans & critics realized the importance of these two wins, so did Jessicka Havok. No longer satisfied being a second in WSU anymore, Havok would launch her masterplan at the end of the “Martinez vs Rain II” event. After Martinez defeated Rain in a 40 minute plus match, Rain hugged and embraced Mercedes Martinez, signaling the end of their 18 month feud. Both showed respect to each other. Havok would interrupt this touching display of sportsmanship, calling Rain out for being a hypocrite and accusing Rain of being soft. Havok then announced she was sick of being in the backseat and was going to take out all of Rain’s Army. Havok revealed that she attacked Amber O’Neal, thus explaining O’Neals disappearance from the 11/6 events. Havok then said she would take out Nikki Roxx, then take out Rain and when it was all said and done, she’d do what Rain could never do in her WSU career – win the WSU World Title.

On 1/22/11, at WSU’s second iPPV “The Final Chapter”, Havok backed up her words and picked up the biggest win of her career, defeating former WSU World Champion Nikki Roxx in a brutal Uncensored Rules match. This was easily the best match of Havok’s carer and Nikki Roxx gave it her all in this match.

Rain, who usually is never at loss for words, has been suspiciously quiet during Havok’s tear in WSU. Is Rain fearing the worst when she clashes with her former charge, Jessicka Havok on 3/5 at WSU’s Fourth Anniversary Show? Or is Rain luring Havok in? Is Rain allowing Havok to lead herself into a self confidence with a huge ego, or is Rain worried about earning a blemish in her win/loss record?

On 3/5 on iPPV, at Gofightlive.tv, Havok vs Rain will take place. This is arguably the biggest match in Jessicka Havok’s career. This is a sink or swim match for Jessicka. Can Jessicka become a shark in WSU or will she just be shark-bait for Rain? Rain has produced many championship-caliber matches and has been voted as 1/2 of WSU’s Match of the Year & WSU Feud of the Year in 2010 due to her battles with Mercedes Martinez. Rain needs this win to prove that she deserves to be back in championship matches. For Havok, defeating the likes of Rain will skyrocket her to championship matches.

The story between Rain & Havok is personal. Havok has taken out all of Rain’s Army, but to really take out an organization, you need to cut the head off. Havok will be looking to rip Rain’s head off. However, if history is any indication, Rain is not one to mess with and ALWAYS has a plan up her sleeve. Rain has always shown to be wise and never gets herself into a situation that she can’t get out of. However, there’s a first time for everything and that first time might be Jessicka Havok.