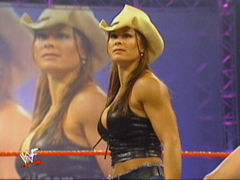 There was a time long ago when female wrestlers were expected to be athletes, first and foremost.  It was a time, Lisa Moretti recalls, when swimsuit models weren’t being bent into the form of a lady wrestler.  And it was a time when Moretti, who portrayed “Ivory” on WWE tv, held a belt called the “Women’s Championship.”  The word “Diva” was nowhere on the belt.

In the latest edition of Kayfabe Commentaries’ DVD series “Timeline: The History of WWE,” Moretti takes viewers back to the year 2001 when the marketability of women wrestlers was being maximized, and was about to be transformed.

In Moretti’s mind, for the worse.

In an attempt to purge wrestling from her system, Moretti hasn’t opened up about WWE in five years.  But in this DVD release, she is candid…and so obviously torn between the disdain she developed for what the WWE had become, and also the passion and elation from certain moments in the sport. In the DVD she guides viewers on the 12 month journey that includes pay-per-views, TVs, the post 9/11 attack shows, Wrestlemania, and Tough Enough.  Oh, and Miss Kitty too.

Kayfabe Commentaries’ Sean Oliver says the series was lucky to land Moretti.  “She was a great opportunity,” he says.  “She was very high-profile at the time, and also retained her respect as a lady wrestler, and didn’t have to be ‘pimped-out’ by what became of that division.  If this series is going to tell the whole story of the WWE, we need representation from this segment of the business too — the women wrestlers.”

The “Timeline: History of WWE” DVD series from Kayfabe Commentaries features one year per edition, guided by a federation superstar from that year.  Other editions feature 1977 with Superstar Graham, 1983 with Don Muraco, 1987 with the Honky Tonk Man, 1988 with Hacksaw Duggan, and 2000 with Rikishi.

The DVD is on sale at www.kayfabecommentaries.com.