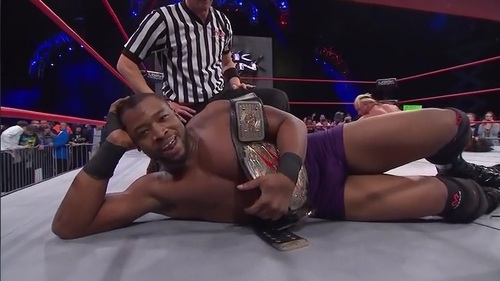 The next season of ABC’s The Bachelorette is shaping up to have some strong competition. One of the contestants on the show will be Ring of Honor pro wrestler Kenny King, according to a bio page on ABC.com with photographic evidence. King has been rumored to be appearing on the show for a few months, but now that ABC has revealed the official cast in full, the rumor has been confirmed.

King will compete with thirty other men in a battle royale to win the love of Rachel Lindsay, herself a former contestant on The Bachelor. You can check out King’s show profile here, to learn the answers to questions such as, “what is a typical Saturday night like for you?” (“Either wrestling in my underwear in front of thousands of people or at home with my daughter.”), and whether or not he’s ever prematurely ejaculated (“There was about two weeks when I first started dating my ex that I was Quick Draw McGraw.”). Yuck.

The first episode of the season kicks off on Monday, and it should be worth watching, if only to see if King’s friends from The Rebellion will make a run-in with a steel chair to save King from elimination.