Last  Friday Las Vegas played host to Lingerie Fighting Championships 19: Hadden vs Mei. The fights went down at the Silver Nugget Casino and featured 16 beautiful women fighting in nothing but lingerie.

Always controversial, the event attracted world-wide attention, much to the delight of new LFC president Michelle Blanchard. “Love us or hate us,” the former Lingerie Football star says, “just don’t ignore us!”

No danger of that happening. Entertainment Tonight Online posted a pic of LFC newcomers Robyn ‘Ruthless’ Hawkens and Lauren ‘The Animal’ Erickson from their bout under the banner ‘What Happened in Vegas?” (http://www.etonline.com/news/124350_Vegas_Pics/index.html?page=Nzk=&itmCnt=MA==)

Veteran scribe and former Lifestyles of the Rich and Famous host Robin Leach wrote in the Las Vegas Sun, “It was MMA fight night – but instead of scantily clad muscle men, it was scantily clad women in lingerie.” Leach is not alone in preferring the latter. (http://lasvegassun.com/vegasdeluxe/2014/jun/02/photos-lingerie-fighting-championships-silver-nugg/)

The Baltimore Sun deemed the event significant enough to earn a place in their ‘day in photos around the world’ segment. (http://darkroom.baltimoresun.com/2014/05/unrest-in-turkey-lingerie-fighting-in-vegas-life-ball-aids-fundraiser-in-austria-may-31/lingerie-fighting-championships-lfc-19/)

London’s Metro News told its readers to forget Froch vs Groves because the big match was really LFC19. (http://metro.co.uk/2014/05/31/the-lingerie-fighting-championships-are-just-what-they-sound-like-4745843/)

Hundreds of news outlets picked up one or more of the above in places as far away as Hungary, Russian and South Africa and services like Getty Images made sure their photographer was in attendance to snap what are surely some of the world’s most photogenic fighters.

For those who couldn’t attend the event live it will be available on thousands of cable systems worldwide starting Friday July 11 at 9pm ET / 6pm PT. 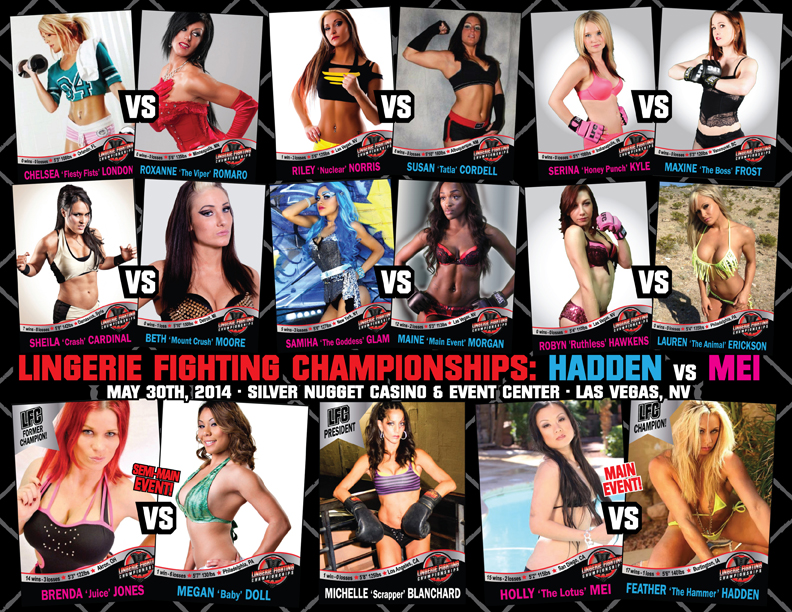 Naturally, more events are in the works and Blanchard has already received offers from promoters / venues in Bangkok, Boston, Daytona Beach, Honolulu, Los Angeles, Macau and Trinidad. She plans to announce a date and location in the coming weeks.

In the meantime, fans can content themselves with pics from this past weekend’s event at: http://www.gettyimages.com/Search/Search.aspx?EventId=495288461