Lita comments on her 2014 WWE Hall of Fame Induction 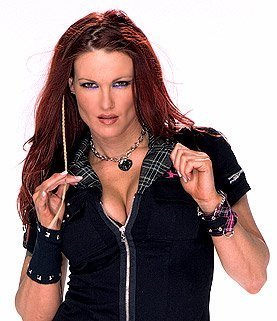 2014 WWE Hall of Famer Lita posted the following statement to her official website about the induction:

“YO! Congrats to all of us! I heard you on social media, repping “LITA HOF 2014” signs at shows, and hashtagging your little hearts out. Your voices were heard! What better place than Wrestlemania 30!

I was so proud watching my bestie enter the 2013 class in the Hall of Fame. I know how hard she had worked, I watched her develop as a wrestler, talent, and woman over the years. I know fans were excited to see our generation of women represented in the HOF. Often in the same breath, I heard support from fans expressing their desire for me to join the ranks of my piers as well. I had hoped at some point I would, but didn’t realize it would be just around the corner.

I tend to have an expect the worse philosophy so I won’t be let down, which seems like a pessimistic outlook when I tend to be such a positive person. Maybe not pessimistic, maybe more self preservation. So much goes into selecting each class and watching each person touches me in a slightly different way, although it is always a similar sense of joy for each person to be able to have that moment where they are able to reflect on their journey and the fans have an opportunity to show their support.

When I played with my band, The Luchagors, my guitar player, Shane, had this exact opposite approach. Every day was going to be “the best day ever” “the best show ever” “the best meal ever” Every event was about to be the best ever. The thought of that ideology, while endearing, was SO annoying to me! It just clashed with my self preservation. This show at this BBQ joint 35 minutes south of Louisville, KY is NOT going to be the best ever, and that’s okay. But, just stop saying it is! Let’s just revel in the awkward, “fun”comfortable moment that we are all sharing. Not everyone can say they have played a show in a BBQ restaurant with the 97 year old owner hooked up to a respirator shoved in the corner in a wheelchair. Should I say hello? Maybe better to act like I don’t notice she’s there? I know, dedicate a song to her. I can’t make this shit up, people.

I appreciate that not every day is the best day ever. At this point in my life, I can reflect on everything I’ve ever been through and know that I have learned, grown, and evolved from it. I can appreciate the good and the bad and derive an equal appreciation from each event. For every weird Texas Chainsaw BBQ show, there was a run in at a TLC match at the Astrodome. For every full body cry I’ve had, I have had uncontrollable laughter.