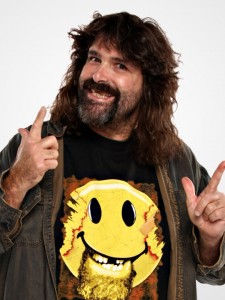 The Score’s Arda Ocal (@arda_ocal) had the chance to sit down with former WWE Champion Mick Foley 24 hours after his appearance at RAW 1000. Highlights:

“I personally got a kick out of it. I had said previously that I would have liked to do something more substantial (at RAW 1000) like cut a serious promo, but there will be time – I can do that 2 months from now, for example. Looking at the legends dressing room, 2 things were noticeable – how fortunate we were to be among those selected to take part in RAW 1000, and this one is very telling, it was a locker room full of legends and they’re talking about Heath Slater and how much they enjoyed their interaction with him”

On playing at ‘Just for Laughs’:

“Montreal, because there’s so many indsutry people there, it can be a tough crowd. They’re not necessarily going to laugh at everything, but they’ll take it in and I’m hoping that some of my fans will attend and make it an exciting atmosphere”

“I guess I can announce it here right? Big show, in the United States, California…Post SummerSlam comedy show at The Improv in Hollywood. It’s a done deal, I just have to figure out who’s on it. The woman at The Improv is asking if I want her to book other comics, and I’m like ‘Give me a few days, because if I can get the WWE stamp of approval, I’d love to have Santino host it, I’d love to have William Regal share some stories, I’d love to have J.R. share some stories and then I’ll do my thing. And then at the end we all come out, and it doesn’t matter how good or bad any of us do individually, I think people are going to love that atmosphere and they get the guys they like doing what they like them to see.”

On the WWE Hall of Fame:

“I do hope it’s this year. It would mean a lot to me honestly. One of the most telling moments of my relationship with WWE is when I got the phone call asking if I’d mind if they mentioned my book on their show when I was working with another company. When I heard the book being mentioned, every reservation I had or any semblance of bitterness vanished you know. I used to go around, not making a big deal out of [the WWE Hall of Fame]. Its like being in a relationship, if you give too much of yourself you risk being hurt. So if I said ‘Oh of course I’d love to be in the Hall of Fame’ I’d be letting them have that and make my career seem less important if I didn’t get it.”

“I think who it would come down to is one of two people, Terry Funk or Jim Ross. It would hurt me to not have one of them there, because Terry, he was a mentor and wrestler. And J.R. put his reputation, possibly his job on the line to bring me in because Vince was not sold believe it or not on Mick Foley, he was not a Mick Foley fan when I came into the company and it took quite a while for him to become one.”

What goes in his (very surprisingly small and tattered) travel bag?

The Pro Wrestling Hall of Fame in Amsterdam, NY and why he drove 8 hours this year just to stay for 35 minutes

Talking about the birth of Mankind in 1996, particularly the inspiration behind having an entrance theme and a different exit theme