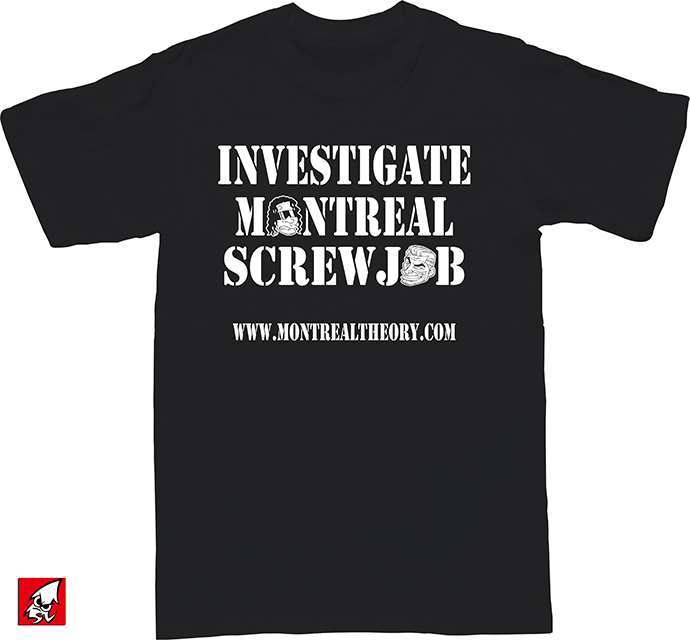 It has caused waves within the pro wrestling community for over a year, intriguing some, upsetting others. It has been profiled on countless websites, podcasts & blogs, and has spawned a debate that may never come to a resolution, with some of wrestling’s most respected minds on both sides of the argument!

If you aren’t familiar with “The Montreal Theory”, check out the trailer right here:

“The Montreal Theory” is the explosive two-disc docu-shoot that analyzes and debates whether or not Bret Hart could have been secretly in on the infamous Montreal Screwjob that saw Vince McMahon allegedly deceive him in front of the world. The DVD features comments from everyone from Steve Corino and Raven to Jerry Lawler and Kevin Nash.

Now, you can own the very first in a line of Montreal Theory T-Shirts. This black 100% pre-shrunk cotton shirt has “Investigate Montreal Screwjob” on the front, in the popular bold and impactful font used by other similar conspiracy-style shirts. Logo is complete with illustrations of Bret & Vince themselves, plus the MontrealTheory.com website.

Shirt is only $20 and available at www.ProWrestlingTees.com/JoeDombrowski and also will be available with Joe Dombrowski at upcoming events he will be at starting very soon! But don’t wait, make a statement on your skepticism and show that you won’t believe what the establishment tells you! Order now and let your voice be heard!