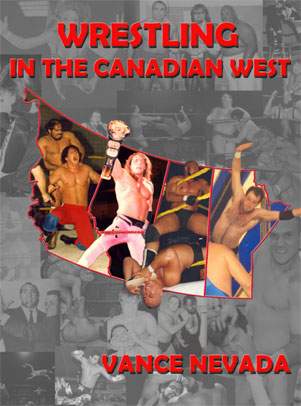 Is it sport or is it entertainment? To wrestler and newly published author Vance Nevada, you can call it whatever you want, as long as you recognize the significance of pro wrestling’s legacy on the Canadian sporting / entertainment landscape over the past century.

Vance Nevada, originally from Souris, Manitoba, got his start in pro wrestling in 1993 grappling in Winnipeg community centres.  Early in his career, he developed an interest in the history of his industry and as his career has gone national, he has spent countless hours in libraries and archives, scanning old newspapers, talking to wrestling alumni, and assembling the pieces for one of the most complete references on the mat game ever assembled.

This fall, Nevada released his book WRESTLING IN THE CANADIAN WEST, a comprehensive history of more than a century of mat action in the western half of the country.  This first of its kind reference looks at not only wrestling’s timeline, but includes championship histories, promotion profiles, Canadian wrestling trivia, road stories from the wrestlers themselves and a number of other timeless features that have never before been captured in print.

It has been a busy year for the 34 year old Nevada who recently settled in Red Deer, Alberta after seven years on the Pacific Coast, where he admits he welcomed “a more relaxed daily commute”.  But since his arrival in the Alberta parkland, he has maintained one of the most aggressive schedules on the Canadian independent wrestling scene with coast to coast match appearances, his ninth ranking in Pro Wrestling Illustrated’s Top 500 listing, and he has been announced as the recipient for the James C. Melby historian award by the Cauliflower Alley Club – a benevolent organization comprised of current and former wrestlers.

His book has been endorsed by multiple generations of wrestlers including Don Leo Jonathan, Bret “The Hitman” Hart, Moondog Moretti, and the Honky Tonk Man.

“Vance Nevada has done as much as anyone in this business as a writer, historian, and as a wrestler,” says Wayne Farris, who has wrestled internationally as The Honky Tonk Man. “I’d say his contribution is as significant as the Harts or any of the top people in the business in Canada.”

At the outset, Nevada and publisher Crowbar Press have delayed a retail release, favoring the opportunity to get out on the road and into wrestling arenas across the country to put it directly into the hands of industry folks and diehard wrestling fans.  As a performer himself, he still maintains a busy match schedule, while balancing book signings and appearances at libraries, Universities, and other non-wrestling venues.

This is a must have for your wrestling book collection!!

Currently, the book is available online through the publisher at www.crowbarpress.com   You can also get your own copy at these fine retailers:

… plus you can meet Vance and get your copy signed in person wherever he appears!!

For more information on Vance or the new book, you can check him out online at www.vancenevada.ca

Find out what all the hype is about … get your copy today!!