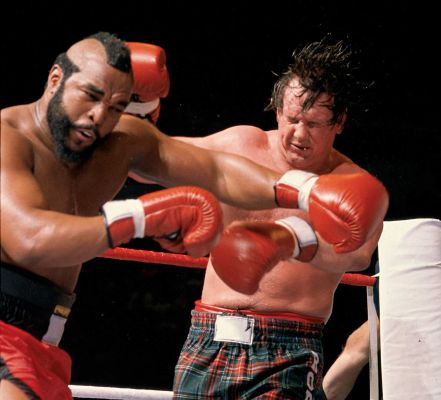 Among wrestling fans, the Nassau Coliseum may be considered “The House that Piper Built.”

From seconding Bob Orton in the main event of the first “Saturday Night’s Main Event” NBC primetime special in 1985, to headlining the New York portion of WrestleMania 2 in a boxing match against Mr. T in 1986, to winning a 1990 Bunkhouse Battle Royal with the help of a chain saw, “Rowdy” Roddy Piper has been front and center in some of the most epic wrestling cards the Uniondale arena has ever seen.

“The Nassau Coliseum had magic happen to it,” said Piper, who recalled making regular stops at the building during his WWE run in the 1980s, including when he was one of wrestling’s most despised rulebreakers. “I had more fights on the way to the ring than I did in the ring at Nassau.”

These days, Piper can be found taking on an entirely new breed of opponent — the walking dead. Piper stars in the new film “Pro Wrestlers vs. Zombies,” which has a limited released in theaters, including Island Cinemas in Mastic, and can be ordered on DVD at prowrestlersvszombies.com.

Piper, who starred in John Carpenter’s 1988 sci-fi classic “They Live,” readily admits that “Pro Wrestlers vs. Zombies” likely won’t be in the Oscars race next year but promises fans of wrestling and of the undead genre will enjoy the campy horror flick.

“I don’t know of a title of a movie that self-describes it any better,” said Piper. “‘Pro Wrestlers vs. Zombies.’ If you buy a ticket to that, you know what you’re getting. There should be no complaints. The people who come into that theater are going to have a blast.”

Piper was recruited onto to the cast by “Hacksaw” Jim Duggan while shooting the WWE Network original series, Legends House.

“I got to be friends with [Duggan] and he was in the cast. And [co-stars] Kurt Angle and Matt Hardy — I love those kids. They’re beautiful. I raised half of them,” Piper said.

Piper also raised a son of his own, Colton Toombs, 24, who will accompany his dad to WrestleMania weekend festivities in New Orleans this Sunday, Piper said. Toombs has dabbled both in pro wrestling and mixed martial arts, but has so far not expressed a desire to follow in his famous father’s foot steps. “He can stand there and just do a back flip or a front flip. He’s a very intense athlete and loves wrestling . . . I love the fact that he didn’t feel he had to prove anything. He’s his own man. And he’s a better man than I ever was already.”

Piper said he has tremendous respect for another wrestler’s son who did follow his dad into the business: WWE world heavyweight champion Randy Orton. Piper used to travel with and wrestle against Orton’s grandfather, Bob Orton Sr., and worked alongside “Cowboy” Bob Orton Jr. for years in WWE in the 1980s.