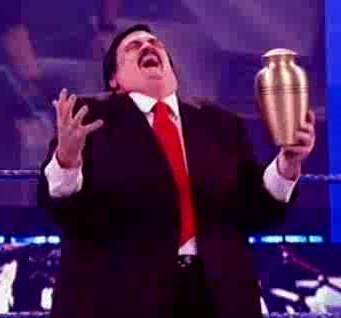 PAUL BEARER REVEALS HOW HE ALMOST MANAGED ABYSS IN TNA, UNDERTAKER-STING, UNDERTAKER-BROCK LESNAR, WHETHER HE’LL BE AT WRESTLEMANIA, AND MORE – By WorldWrestlingInsanity.com

He came to ClubWWI.com in 2007 and now, after his return to WWE, Percy “Paul Bearer” Pringle returns to the Club for a second 50 minute shoot interview with James Guttman that tears down the curtain and rips the lid off the coffin.

Percy has been a part of some of wrestling’s most memorable moments and addresses them all including talk of Refusing WWE’s Offer To Return Initially, Their Shocked Reaction, The Question He Asked Himself Before Signing, The Other Taker/Kane Family Member Percy Wanted To Debut in WWE, The Bonus Check WWE Sent Him After Edge Attacked Him With Food, Personal Feelings About Glenn “Kane” Jacobs, Why His Character Didn’t “Die” in Cement, What Kane Calls Him Backstage, The Shock of His Heel Turn at Hell in a Cell, Diesel’s WWE Return, PercyPringle.com,  AJ Styles, Jeff Jarrett, Nexus, Bobby Heenan, Jerry Lawler, and More.  For a full list of topics head to: www.worldwrestlinginsanity.com

James Guttman and Paul Bearer speak at length about the Undertaker/Kane/Bearer family traits and how it seems like none of them can die.  JG points to moments from all three men that seemed like the end of their characters.  But that’s not the case.  James asks Bearer about public reaction to his near-death experiences on air from drowning in cement to his huge wheelchair tumble during the Edge-Kane storyline.  The moments shocked fans and Bearer tells ClubWWI.com listeners about the reactions and why they’re more like overreactions:

As the interview continues, Paul and James discuss TNA.  Bearer watches the program and even takes time to visit TNA house shows when they’re nearby.  He mentions Abyss and Guttman asks about the similarities between his character and Kane.  How did Bearer feel about the gimmick?  As his ClubWWI.com interview continues, he reveals a major moment in wrestling history…that almost happened.

“I like him.  He’s a fantastic guy.  I don’t know if you know him or not.  He’s a gentleman in and out of the ring, just like I said about Kane.  He’s a great athlete. There was a time when I worked for TNA early on and they were scouting him at that time.  He was starting in the business and there was almost a point where I was going to be his manager when he started but I was having so many health problems with my weight at that time so it was never meant to be.  But I love his character.  I enjoy him thoroughly.”

On the subject of TNA-WWE tie-ins, JG brings up the 2/21/11 videos.  A vignette aired on WWE TV hyping the date with a figure that appeared to be either Undertaker or Sting.  Regardless of whether Sting is a surprise looking to debut on the same night as Undertaker’s return or not, what does Paul think of Sting in WWE?  Would it be a good idea for the WCW icon to show up and challenge Taker?  Bearer tells ClubWWI members about Undertaker’s ability to drum up interest in almost anything he does when it comes to fresh opponents:

“I would think it would certainly be a possibility. I know Sting.  We know each other professionally but we have never worked together.  I don’t think we’ve ever been in the same territory or in the ring opposite each other.  I just know him in passing from different territories so I don’t know him too well.  I think at this point in his career, it would be a good move for him if that’s what that’s going to be.  Good for him.  Just like the deal when Undertaker was at the UFC fight and Brock Lesnar walked by and they had that little exchange.  My God, the next morning people were going crazy!  And anybody with any damn sense knew well that Lesnar is under contract with UFC.  Taker is under contract to WWE.  Taker would have been great in that genre 20 years ago.  I’m not saying Taker’s old or anything, but that time is gone.  He’s still our phenom.  He’ll always be a phenom.  There’ll never be another.  It’s the greatest gimmick in the history of our business and there’ll never be another.”

To hear this interview in full along with over 250 other top names from the wrestling business – including  audio shows hosted by Paul Roma, Danny Doring, Fifi, and others – head to ClubWWI.com right now.  Those interested in booking Percy Pringle for upcoming shows can contact him through PercyPringle.com