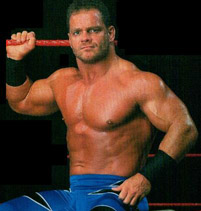 On June 25th, 2007, the grappler was found dead in his Atlanta home, along with the bodies of his wife, Nancy, and his seven-year-old son, Daniel. The horrific murder-suicide outraged the nation; wrestling’s fake cartoon world suddenly became real. The staggering level of public interest in the days and weeks afterwards shocked both media and wrestling fans – it challenged the perception of wrestling as just tabloid fodder.

“Benoit ” scrutinizes this issue and more, in the form of five serious essays. The essays are written by commentators with deep ties to the wrestling industry:

-In the essay, “â€˜Roids, Reporters, and Rasslin’: Anatomy of a Feeding Frenzy”, Steve Johnson tackles the media’s own coverage of the story and the role of the media in the story.

-In “Stampede Days: A Crippler on the Rise”, Heath McCoy (Calgary Herald reporter, and Hart family friend), establishes the facts of the case and examines Benoit’s Alberta wrestling roots.

-Irv Muchnick’s provocative essay, “Day of the Dead”, examines the pop-cultural relevance of this event in wrestling’s dark history.

-Greg Oliver, a Toronto-based journalist, includes chilling personal e-mail correspondence with Benoit, and in his second essay, discusses the story in the context of the pro-wrestling industry.

“Benoit” looks at this terrible event in its greater cultural context, and it does so with the integrity and passion that each of its contributors has shown in years of experience in the world of pro wrestling.