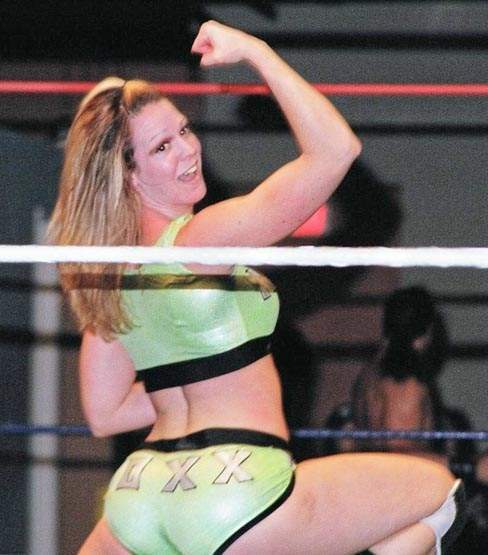 World Women’s Wrestling returned to Good Time Emporium in Somerville, MA last night (Sunday, September 30) for another wild, unpredictable night of action. Unpredictable is an apt description, as no one could have anticipated what was to come.In the opening match, “The Warrior Princess” Alere Little Feather defeated Violet Flame.

Former WWE/ECW Referee & NECW Official Paul Richard brought out local network CN8’s Emmy Award-winning sports reporter John Carchedi and announced that Carchedi was his new protege in the refereeing field and Carchedi would ref his first match at WWW with Richard outside the ring giving him advice if needed.

The Soul Sistahs, Jana & Latasha, came to the ring and said that Mistress Belmont was injured and thus unable to compete. They seemed to insinuate that they had something to do with the injury. They then stated that if the Daughters of Darkness really think they ought to be the WWW Tag Team Champions (an unrecognized title at this time) then Della Morte should defend that title alone. Della accepted and the match was on. As ref Carchedi was distracted trying to force Jana to adhere to the five-second double team rule, Natalia ran from the back and shoved Latasha off the top rope into the waiting arms of Della who spun into a brutal spine buster for the win. After the match the Sistahs assaulted Richard until both Natalia and Della came to his rescue.

New WWW Champion Lexxus came to the ring to address the fact that Ariel had been chosen to be her open challenge opponent for the night. Ariel came out and stated how proud of her friend she was, but vowed to leave the night as champion. Former WWW Champion Tanya Lee came out fired up about not getting another shot at the title and finally Nikki Roxx came to the ring and said that her 90-day title defense wait had expired and she too wanted a shot. With the title match already signed, Roxx and Tanya Lee resumed their feud in a match as Lexxus and Ariel left the ring to prepare for their match.

Tanya Lee with Sean Gorman, and Nikki Roxx then fought to a double count out.

After intermission, Alicia came to the ring stating that she was undefeated in WWW competition and demanding her shot at being the top girl in the company. Natalia came to the ring to face the New Jersey native. In a thrilling and hard-hitting near-20 minute match, Latasha of the Soul Sistahs returned to ringside and assisted Alicia’s pin attempt by holding the leg of Natalia. Alicia remains undefeated in World Women’s Wrestling.

Violet Flame was brought to the ring in a well-deserved show of appreciation by Sheldon Goldberg and WWW /NECW staff with it being he last regular appearance for the company due to relocating to the West. Violet received a standing ovation and chants of “Violet”.

Before the main event could begin, Tanya Lee and Sean Gorman returned demanding that Lee be put into the main event, as Roxx again was unable to defeat her. Goldberg stated that if she did not go back to the locker room by Senior Official Rich Bass’ count of ten, she would receive no title shots for the next YEAR. Gorman and his charge made a hasty retreat.

In the main event, another near-twenty minute match that tore down the house, WWW Champion Lexxus retained her title over “The Portuguese Princess” Ariel with a flying top rope ‘rana.

After the match, a show of respect and friendship between the two competitors was interrupted by Tanya Lee, who threw the exhausted Ariel from the ring and assaulted the WWW Champion Lexxus. Nikki Roxx ran to the ring to confront Gorman and Tanya Lee. The stare down lasted about a minute when unexpectedly, Gorman grabbed Tanya Lee by the hair and threw her towards Roxx. Roxx booted Lee in the stomach and hit her new “Dominator-like” finisher. Gorman grabbed a Dynasty of Champions shirt from his pocket and threw it to Roxx, who read it. Eddie Edwards and DC Dillinger of the Dynasty ran to the ring looking a bit confused. Roxx then put the shirt on and all four embraced. It became very obvious at this point that Nikki Roxx had done the unthinkable by joining forces with Sean Gorman and Sabotage.

World Women’s Wrestling returns to live action on Sunday afternoon, November 11 with a 3 PM bell time to Good Time Emporium, 30 Assembly Sq. Drive in Somerville, MA. Tickets are on sale now at all FYE locations and online at www.WorldWomensWrestling.com.