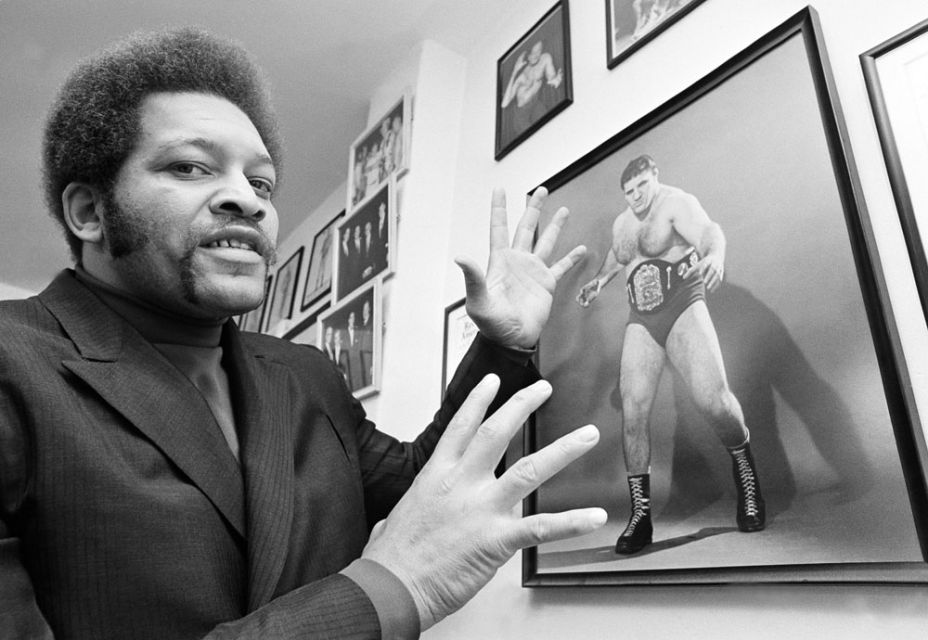 Getting Into The Business:

I walked into the dressing room in the Civic Center in Albuquerque, New Mexico, one of the hottest wrestling cities in the Amarillo Territory. It was early and the only one in the dressing room was “The Big Cat,” Ernie Ladd. Ernie got up from lacing his humongous wrestling shoes to greet me with a big smile. I looked up at his smiling face and shook his hand. it was like shaking hands with Andre the Giant as his hand completely wrapped around mine.

I asked Ernie about his college football days at Grambling University. Ernie looked at me and said, “I went to college on an academic scholarship.”

I laid my wrestling bag on the table in front of the mirrors in the Civic Center dressing room and opened it up to start getting dressed for the show. Ernie noticed a small magnetic chess board in my wrestling bag. (Chess was a fad in the Amarillo Territory made popular by Bobby Fischer’s victory over Russia’s Boris Spassky at the top of the world in Reykjavik, Iceland) Ernie challenged me to a game of Chess. I thought I was pretty good having beat Corsica Jean at the Saturday TV Taping in Amarillo the day before.

I manipulated my Queen into position and said to Ernie, “Check.” Ernie moved his King to safe and I followed up by sliding my Rook into an advantageous position feeling the thrill of victory on the next move.

Ernie had stacked his Queen behind his Bishop. Sliding his Bishop to the right giving check by exposure with his Queen and trapping my King with the same Bishop, Ernie said, “Check Mate.”

Ernie was happy, he smiled big, his eyes opened wide and his forehead extended back slightly. He was thrilled to have beaten the NWA World Champion in a game of Chess.

I was scheduled to wrestle my Football Hero, Ernie Ladd that night in Albuquerque for the NWA World Championship. I had watched Ernie wrestle my father Dory Funk Sr. in Amarillo the year before. Ernie Walked away with a victory in Dad’s home town, quite an accomplishment. After the match, Dory Funk Sr. had only respect for Ernie Ladd. Dad spoke of what a great athlete he was. They became friends for life.

Mike London, the wrestling promoter in Albuquerque, New Mexico stood in the center of the ring and called for the microphone to introduce the contestants wrestling for the NWA World Heavyweight Championship. Ernie Ladd had so much heat it was difficult to hear the introduction. Ernie walked the walk and talked the talk, but when we hooked up I could feel the awesome power that made this man a legend in two professional sports.

After the thirty minute mark, I caught Ernie with a forearm blow that caught him by surprise. I threw three more as hard as I could and on the forth, the Big Cat went down. I picked up the spinning toe hold and from the underneath the Big Cat jabbed me in the throat with his patented tapped thumb. I went down and rolled out of the ring and out to the floor.

The wrestling fans were in an uproar. As I came back to the ring apron, Ernie went for a body slam from the outside in. I under hooked his arm and using his own momentum rolled the Big Cat forward into a cradle for the three count and the victory.

As Ernie kicked out on the finish, I looked him right in the eye and said, “Checkmate.” His forehead stretched, his eyes opened wide and his face broke into a big smile.

After the show that night, I talked to Ernie a lot about understanding people, their feelings, their hopes, their fears and emotions. Ernie taught me a lot that night about working with people that helped me in my future as a wrestler, wrestling promoter and Coach of Professional Wrestlers.

About two years ago, Ernie gave me a call. I asked him, “what’s up?” Ernie said, “I just wanted to tell You and Marti I love you and I am praying for you. God Bless You Both.”

“God Bless you too Ernie.”

From the Funking Conservatory our condolences to the family of “The Big Cat” Ernie Ladd.