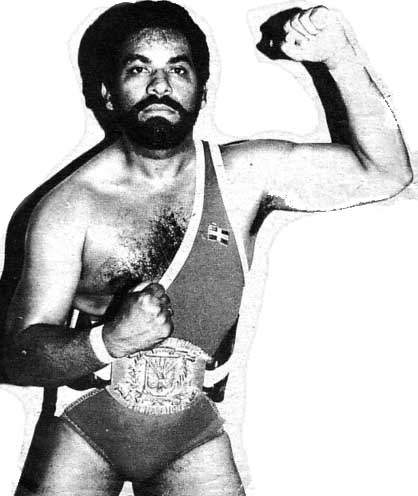 I have to tell you Jack Veneno’s catch phrase, that he only said if he was seriasly going to kick someones a$*. It was some thing like this: “Yo soy un hombre de pelo en pecho” (I’m a chest hair man) and the best one, he would bend on one knee, hit his chest whith his right arm and say: ” Lo juro por mi mama, Doña Tatica que le voy a ganar” (I swear on my mother Doña Tatica that I’ll beat him).

Now, who is the guy that got the credite of bringing Flair to DR in the storyline? Veneno’s long time enemy: Relampago Hernandez. This dude was bad. He had a very looooooong rivalry whith Veneno, he was known by these two names: “El Genio del Mal” (The geanius of evil) and “La Gallina” (The Chiken) He’s around 5′ 9”, like 210 lbs. (I think Veneno is around the same height and weight) and his finisher was “El enterron de cabeza” (Piledriver)

In storyline, Relampago would keep bringing wrestlers from “diferent parts of the world” sent by none other than The Nature Boy himself! (it was funny as hell, when it was time for “los rudos” [the brawlers] to do their promos, Relampago would show a video of Rick Flair saying something to the camera and getting on his LearJet, and would put on some subtitles saying stuff to Veneno, that he was going to get his belt back and the he would send So and So to get it back, I’f you watched the video and did not know a like of english you’d probably buy it, but, my brother and I knew what Flair was saying, and it had nothing to do with Veneno!!!)

Relampago was big on the mic, he cut great promos, though he did not have any catchphraises like veneno that I remember. Relampago wrestled for Veneno till the early 90’s then he wrestled indy’s around the country, and made a name for himself in Puerto Rico. He did some drugs and went to Jail for like 3 years but now he is clean, and is now a deacon for the Catholic Church here in DR.

I just thought you should know about him, cause here in DR he is as loved as Veneno is. To us, he is our Ric Flair, the best heel of all time.