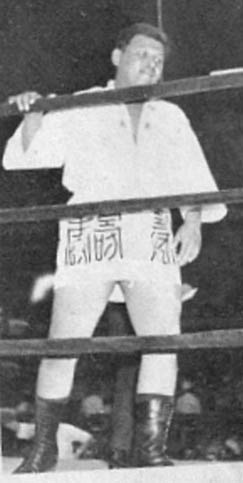 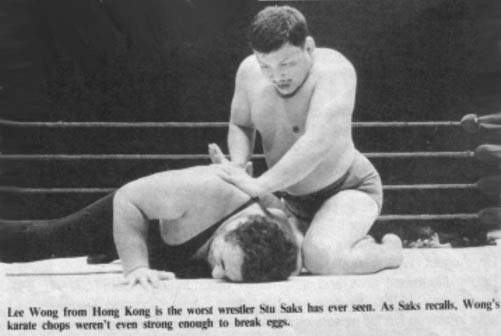 1972: June 16 in North Attleboro Mass. and 17 in Springfield Mass Lee Wong beat Nikita Mulkovitch. This is a real pair of highlights as I never knew Wong to win and two nights running he beat a real veteran. Bravo Wong.

Louis Derobertis wrote (March 20, 2010): I was scrolling through your site. I have a Lee Wong tidbit to offer. Wong obviously was a jobber. However, in the early 70 (right before Koloff beat Bruno for the title), Lee Wong teamed with Monsoon and, I believe, Victor Rivera or Mario Milano in a six man tag match in Scranton, Pa. Wong was the “replacement” for whichever of the two didn’t show. The opponents were the big Ks ? Yvon Koloff, Killer Kowalski and Krippler Karl Kovachs (The Big K). The heels won the match pinning Wong for the deciding fall. What made this match memorable was the ending. Even though the heels won, Koloff and Kowalski got into it with each other at the end of the match. The main event the next match was between Koloff and Kowalski ? ended in double dq. It was quite a bout. I’ve never heard of the two meeting at any other time in their careers. I’ve managed to track down reference to these two Scranton cards in various wrestling sites that list cards chronologically for each year. I believe the year was 72 or 73.
UPDATE::