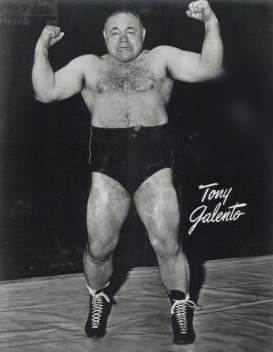 Michael Norris wrote: Two Ton Tony Galento was a popular heavyweight Boxer in the 1930s and 1940s. Had fights with Max Baer and Primo Carnera. Never held any titles. Worked as a wrestler in the 50s as did Carnera and Baer.

Crimson Mask wrote: Tony Galento was a very popular boxer. Actually knocked Joe Louis down and beat some top guys. Very rough, brawling kind of fighter, often involved in foul-filled slugfests. A natural for rasslin. I think Buddy Rogers brought him over. I know Rogers did jobs for him, which Rogers rarely did for anybody, but Buddy was a big mark for boxers. His last two official boxing matches were after he had rassled some and were against rasslers (Blassie one of them) and were works. There’s also a famous story of Jackie Gleason when he was still working the joints as a comic getting pissed at a heckler and inviting him outside—the heckler turned out to be Galento and of course he kicked Jackie’s ass. He did some movie work too—he was in On the Waterfront and Requiem for a Heavyweight.

Len Kruger wrote: Two Ton Tony Galento was a professional boxer before turning to wrestling, first as a ref., then as a worker down south. If I’m correct Mario Galento who worked years ago down in Georgia, Tenn. and the Carolinas got his name from him.

Len Kruger wrote again: Cool. I just found a picture of Two Ton Tony Galento with Prof. Toru Tanaka with their manager Red Berry, it doesn’t say what territory though. I also found out he fought Joe Louis for the World Heavyweight Boxing Title in the 1930’s. Tony put Louis down in the third round but, Louis came back and knocked Tony out in the Fourth. This took place at the old Yankee Stadium. Tony lived in Orange, NJ where he owned a pub. He was liked but feared by patrons and friends. He stood 5’8” but at one point weighed over 300lbs. In the beginning when he wrestled he wrestled mostly bears as a side attraction. When I was a kid living in Georgia I can remember him working with the Hines Boys, Billy Boy and Bad Boy Jimmy.

Dick Steinborn wrote: When Toots Mondt was promoting in Chicago, he brought me into work with Jim Londos, whom at that time was 63. I was only 19. The next week I went in the ring with Tony Galento. As I left the dressing room, Toots whispered to me, “Teach him a wrestling lesson.” Naturally, Galento got hot, especially when I took him down and rode him all over the ring. He was out of shape, and pissed.