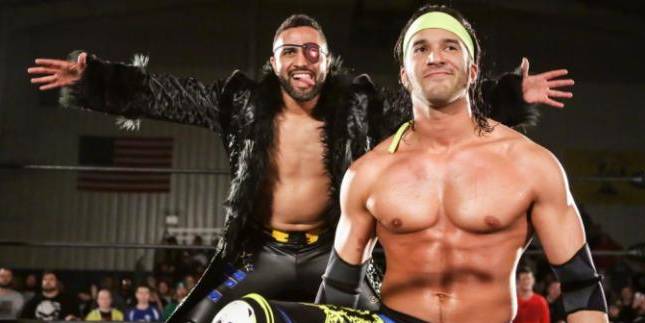 #1 Contenders Tag Team Gauntlet Match: ROH is going to see if they can successfully pull off the “one match show,” as the tag team gauntlet will last the entire hour. The winning team receives a shot at the tag team titles. I’ll break it down pairing by pairing to make it a bit easier to follow.

– reDRagon vs. Caprice Coleman & Will Ferrara kicked us off. For the most part, Prince Nana’s guys never felt like a threat, but the action was well done. The crowd wasn’t into the match all that much, not dead, but they guys were doing a fine job but felt as if they were struggling to get some reactions. We got some dives, some grappling and overall this was a good way to kick off the gauntlet. ReDRagon picks up the win with submissions on both of their opponents. One day the Prince Nana thing will pay off, maybe, possibly; fuck if I know.

– reDRagon vs. Joey Daddiego & Chris Larusso w/Truth Martini was out next pairing. The crowd did not give a single solitary fuck about this, because Daddiego is the House of Truth G team, and Larusso is “a prospect” for them. I know it was late in the tapings, but watching reDRagon work so hard to give these guys some run was disappointing because this was just dead. The previous match they at least had some life, but here it felt as if the building was muted at times. Daddiego walked out on Larusso, and reDRagon picked up the win and will more on again. ReDRagon worked really, really hard here to make you care, but it was a completely uphill battle. Larusso tapped to a guillotine, and reDRagon again moves on.

– reDRagon vs. The Young Bucks was then next, which was a really nice order and with the history between the teams I was excited. This was worked differently than the previous two matches, as they went tornado rules for the most part. I appreciated that, as well as he fact that reDRagon was able to stop the Bucks from using their superkicks, playing into how well they know them. This had great pacing, worked similar to an opening sprint where you wanted the crowd to get into it as fast as possible, and that was needed here. They worked a great closing stretch, which came off effortlessly due to their experience working together. Superkick more bang for your buck sent reDragon home, and the Bucks moved on. These two teams are just a fun combination.

– The Young Bucks vs. Brutal Bob Evans & Tim Hughes I get booking lesser teams in here to allow the established teams to pick up wins, but I don’t really think Brutal Bob Evans & Tim Hughes bring much to the overall product. They really could have trimmed this team from the match. To the credit of Evans and Hughes, they did some fun comedy stuff and the match was fine. The Bucks hit the corner powerbomb and then the senton and that was that. The Addiction are next.

– The Young Bucks vs. The Addiction was the next set, and surprisingly was shorter than I expected. The Addiction wee the cocky assholes you love to hate, and that swagger ended up costing them as they thought they had things under control, but the Bucks made the comeback and picked up the win. The Addiction weren’t done, because they attacked the Bucks and beat them down, and then the final team, Roppongi Vice, made the save.

– The Young Bucks vs. Roppongi Vice was our final paring. These guys worked the final stretch at a great click, similar to how the bucks and reDRagon worked. They work very well together, the work came off effortless and they largely hit all of their trademark stuff to get the crowd into the match more than they had been. Roppongi Vice was able to counter more bang for your buck, leading to Roppongi Vice hitting the strong zero to pick up the win and the title shot. I felt the work was good, but I wanted Roppongi Vice to work more heelish than they did. They have been teasing it in previous appearances, and they had the chance to simply play off of the Addiction attack. Doing that would have given the real dynamic between heel and face, and given the Bucks more sympathy. As an overall package, the match was good and had some fun moments, but i feel if they had trimmed a team or two, it would have helped.