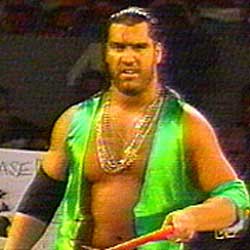 For the full audio please visit http://www.inyourheadonline.com
Rick Titan joins Jack, OIB and Barbie Richards on IYH. Titan is best known by American fans for being the new Razor Ramon during his brief 1996-1997 WWF run.

Titan is currently a author and a public speaker. Titan has written a book about life after wrestling although there are a few stories about wrestling. Titan talks about losing a couple of close friends in Mike Awesome and Chris Benoit.

Jack asks if Titan used any drugs. Titan says “not really” and admits to drinking like most of the boys. Titan says that life after wrestling is very depressing.

Titan has been told that women taking the pill is the same thing as men taking anabolic steroids. He has not seen the documentary “Bigger, Stronger, Faster”.

Jack asks about Mike Awesome. Titan thought Awesome was a “awesome guy”. Titan talks about tagging with Awesome and working with people in Japan where their was a language difference. Titan talked about working the big promotions in the United States with Horace Hogan and Mike Awesome while they were working for FMW.

Titan notes that he went through ECW and became the new Razor Ramon gimmick. Titan had a really good match with Sabu. Titan talks about doing his Ramon impression and talked to Shane Douglas over a speaker. Titan says that Douglas face was beat red and was furious that Heyman brought Scott Hall into ECW. He was asked to do the impression out in front of the fans. Titan says that a WWF referee was at the building that Titan did the impression and went back to Vince McMahon to use Titan for the impression since fans wanted Razor Ramon back. Titan wasn’t treated bad but not great.

Titan recalls coming back from the gym and having a message from Vince McMahon at his house. McMahon told Titan that he wanted Titan to be his new Razor Ramon. Titan knew that it wasn’t going to work out well. WWF never talked to Titan about repackaging him.

Jack asks how did wrestlers treat Titan. Titan heard a lot of bad things about Shawn Michaels but says that Michaels taught him how to throw the Ramon punch.

Titan knew what the crowd reaction was going when he came out for the time. “Fans want the original”. Titan talks about working for Jerry Lawler and having a successful baby face run after turning on Glenn Jacobs.

Titan never worked never one of the bomb matches in Japan. He tried to avoid wrestling in the barbed wire matches because those were shoot matches and he would get torn up.

Barbie asks if Titan was in Japan when Sabu and Sheik set the ring on fire and had to run away. Titan thought that the match was a gimmick and didn’t think it was a big deal.

Jack asks if Titan was asked to go to WCW. Titan was in the New World Order version in Japan and says that he talked about going there but never did.

Titan has never met Scott Hall. He has met everyone aside from Scott Hall. Titan believes that Hall never had a problem with him being the new Razor Ramon because he thinks Hall was confident in what he had done in the WWF.

Jack asks what Bad News Brown was like. Titan believes that within a year he and Brown were able to trust each other and they trained some good guys while they had their school.

Titan says Jim Ross was a nice guy who didn’t have anything invested into the new Ramon & Diesel gimmick.

Titan talks about visiting a WWE show in Calgary. Titan noticed that once you leave the wrestling business you are seen to “no longer being in the inner circle”.

Before the interview ends, Titan talks about his new book. Titan has used mediation to get over the bad things wrestling had done to him. Titan believes that wrestlers who have gotten out the business would enjoy the read and learn from it.