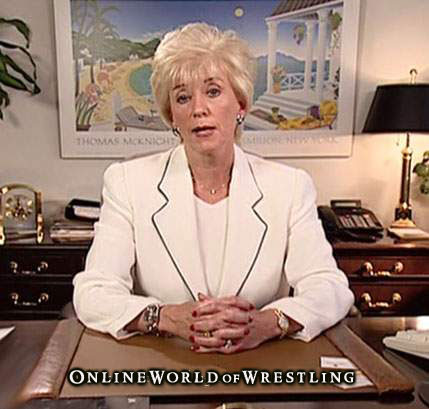 This week’s column is going to focus on the upcoming election. This week is an important election for wrestling fans even though not every wrestling fan can vote this upcoming Tuesday. There are a few reasons why you should note vote for Linda, which I will go over in this column because it actually relates to pro wrestling.

It should be noted, I don’t know the “issues”. I do not live in Connecticut and there is no reason for me to follow the politics of the state since I cannot vote anyway. My view is the view of an outsider and pro wrestling fan.

Some people believe that if Linda McMahon loses the election this week that WWE will slowly but surely get out of the “Watered Down” era a.k.a. “The PG Era” (Despite the fact WWE has mostly been PG since the 80’s). I do not agree with this thought process. I think WWE is in this “Watered Down” Era for the long haul. However, I could be wrong.

One thing I am not wrong and you can take as a fact, if Linda does win, it is a definite things stay the way they currently are, which is a terrible product with exception to a few (Zack Ryder, Swagger).

This leads to me to the first reason to not vote for Linda McMahon. If you vote for Linda McMahon, you are guaranteed that WWE will not get better and in fact, there may be a better chance they become even more “Watered Down” than they usually are. Is that even possible? You are damn right it is. Whereas if you don’t vote for Linda, you may get the same result, but there is a “possibility”. I would rather have a “possibility” that WWE will get better rather than a “guarantee” that it will get worse.

The second reason is because Linda McMahon is playing dirtier than the usual politician. I find it amazing that WWE won a court case where people can wear WWE merchandise to the poll booths. There is no way that should have happened. Years ago, Schwarzenegger ran for office and the court would not allow any “Terminator” apparel. This was a great call. People need to realize that not everyone is smart. In fact, some people are pretty stupid and I am not calling out a certain group. Some people just are. By wearing WWE merchandise, the stupid undecided voter will look at the shirt and say “I think it would be cool if a wrestling person got in. It will be like Ventura” or something stupid like that. The reason I call it stupid is because that person’s thought process has NOTHING to do with the issues of the state and would not have even thought that if they had not seen the WWE shirt.

Add in the fact that WWE is giving away merchandise the day of the election, that makes the situation even more unfair. The court was right to not allow WWE merchandise to the booths. The only person that would disagree with that are “WWE fanboys” that have been drinking the kool-aid so much (like Jericho) and will go along with everything the company does. I will admit, if the other candidate owned a part of the NFL and people can go to the polls with NFL merchandise then it would be fair. But that is not the case.

The third reason to not vote for Linda is because Jesse Ventura does not support her. I will be honest, this is a stupid reason. I only put in on the list because it would seem odds only giving two reasons. Besides, the other two reasons are more than enough to get you to not vote for Linda, both as a wrestling fan and an outsider.

Check out more “Don’t Vote For Linda” stuff on this week’s Sunset Flip Wrestling Show at sunsetflipwrestling.podomatic.com I celebrate Halloween a bit and tell you to vote for CNN’s Hero of the Year “Aki Ra”.