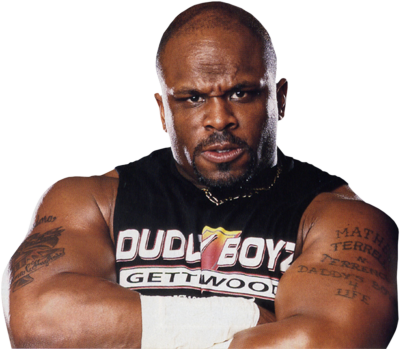 Devon recently spoke with Inside the Ropes about his near-departure from TNA last summer and more. Check out the highlights:

On WWF breaking up the Dudley Boyz in 2002: “At that point we weren’t ready for it, even though Vince wanted us to do it because he saw me doin’ something and he saw Bubba doin’ something. I remember when we were told about it, I wasn’t too happy about it and neither was he. We both thought it was the wrong time to do it, and it was, because we didn’t make it as singles competitors and I think that hurt us, because when that happened and that flopped, people just thought “Oh the Dudley Boyz couldn’t do it on their own” and that bothered me for many, many years. which is why it was so important that when we separated in TNA, because here we come to TNA, we conquer there, we do excellent in Japan, and helped put TNA on the map, we were ecstatic about that.

Once we were done, and we knew we’d won the NWA tag titles, the TNA tag titles, so successful in Japan, we found there was nothing left for us to do. Now you look back at that moment in 2002, there was still a lot for us to do. We were growing and still learning at that particular point in time, but then you move forward to TNA, here we go, it’s the opportunity of a lifetime, now we can prove to those who said the Dudleyz couldn’t do it by themselves, to prove them wrong. Bully Ray’s doing what he’s doing and now with the whole Aces and Eights thing, everything has a time and place, you’ve got to know when that time is. 2002 wasn’t the time to break the Dudley Boyz up and I don’t think people understood that, it wasn’t that we couldn’t do it on our own, it just wasn’t the right time. But now, I’m in Aces and Eights and he’s marrying Brooke with Hulk as his father in law, and we’re both experiencing success.”

On what happened when he left TNA last summer: “We couldn’t come to an agreement on a contract. A similar thing happened with WWE in 2005. Bubba were doing things separate at the time, normally we did our contracts together but at this particular point in time we did it separate. That’s basically what it was, we couldn’t come to an agreement. I held no ill will towards the company, I just knew what I had to do to make my family survive, it’s getting close to winding this thing down and you’ve gotta look out for your best interests. We just couldn’t agree financially. Everyone thought it was part of an angle that was being done, but it really wasn’t, I was gone. When I made that announcement, I was gone, I was not coming back. Then a new offer came in two months later and again it was something where I wasn’t looking to come back but now with the whole thing with Aces and Eights, you know, I love it. It’s something I never thought I’d get involved with until they came to me with it. I’m just happy.”

On whether Devon and Bully Ray ever be on the same side again: “Absolutely not. I don’t want the Dudley Boyz or Team 3D, I don’t want it. As far as I’m concerned it’s dead and over. This has nothing personally to do with Bubba and I. Listen, I’ve waited over 15 years to be in this position, I’m not moving backwards, I’m moving forward. I hope he feels the same. People say “Oh guys, you should be like KISS and do it one more time” I don’t want one more time. I’m not being selfish, I’m not being egotistical but there’s nothing left for us to do. For us to be together again or on the same page….Edge and Christian, The Hardyz went their own way, it’s time for us to go our own way. ECW, we accomplished, WWF and WWE, we accomplished. TNA, we accomplished. All Japan, New Japan, Hustle. We’ve done everything there is to do. Maybe we’ll be on the same page 20 years from now at the Hall of Fame when we’re inducted but that’s about it. Some of the fans, they’ve gotta let it go, they’ve gotta let ECW go and let the Dudleyz go.”

On Lockdown: “You’re gonna see Sting get his ass whooped and his team mates, whoever feels they wanna take on Aces and Eights. We’re gonna go out there, we’re gonna rule just like we always do, just like we did in 2012 and 2013. There isn’t anyone out there that can stop the total domination of Aces and Eights. We’ll rule today, tomorrow and we’ll rule in the future. Lockdown is gonna turn out just like Bound For Glory, where Aces and Eights outsmart TNA and doing whatever it takes to get a victory over TNA and their team.”

Editor’s note – this interview is particularly interesting after what happened at TNA’s “Lockdown” pay-per-view this past weekend.