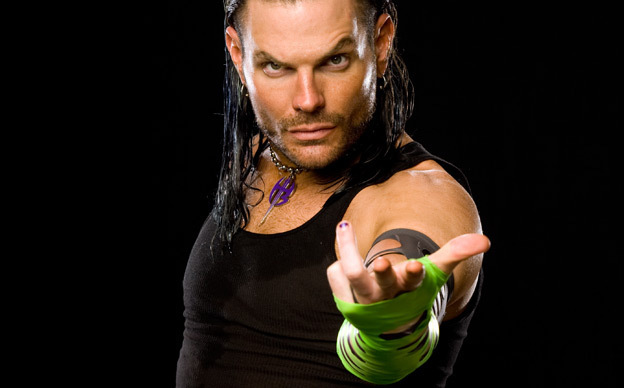 Here are some more excerpts from Jeff Hardy‘s interview with MLive.com covering his in-ring style, the future of TNA and more. Check out the highlights:

On his career of Michigan and the Detroit area: “I always think of Rob Van Dam; he’s from Battle Creek, and I always think about Eminem and the movie ‘8 Mile.’ Just when it comes to wrestling, the fans always great – and I’ve been with both companies. They’re just great each and every time and I look forward to coming back.”

On how he’s still able to do his risky in-ring style: “I really have no answer for that (laughing). I think I’m just lucky more than anything. I was wrestling with my brother for years, and he had several injuries along the way. I’ve had injuries, but nothing that’s put me under the knife – yet. I’m 35 now and I’m feeling pretty good now. I’m taking extremely good care of myself. I think my daughter has a lot to do with my new-found success and my belief in myself. Overall, I think I’m just lucky, and I hope I continue to be lucky. But I do get a lot more nervous now. But I’m doing good, I’m doing good, and everything is alright.”

On whether he feels more pressure to put on risks with the rise of UFC and other extreme sports: “Yeah, with me there is because I can’t tell you how man time I heard ‘Man, you don’t have to do all that stuff.’ Well, OK, then what do I do? If I didn’t do what I do – even now – I think it would really be hard to be Jeff Hardy (in the ring); a complete character change, whatever it may be. Yeah, I feel pressure, but I think overall smarter now (about my career). As far as being different and strange, I’ve got that down, and the creatures (his fans) have been great and with me every step of the way. And sure, there’s people still out there that find ways to dislike or despise me, and those people just make me stronger.”

On what he’s learned in his career: “I’ve learned a lot, you know, and I’ve been through a lot. I’m good at professional wrestling, and I always will be good, but what’s always been different about me is that I can’t completely focus on professional wrestling. If I could, there’s no telling who or what I’d be right now. But I have to ride motorcycles, I have to paint, I have to write songs, I have to try and get better performing (in the ring and on stage with music). There’s so many things I have to do other than wrestle. Here at TNA, what’s so cool is that they’ve given me more time to focus on all those things. And they’ve put me in a great position to be a great professional wrestler. Things are really starting to happen now; my evolution is really in full effect and the music is going great. Everything is just kind of going real well. There’s so much to do now. I’m on the good stuff now and using my talent through all my other talents, including those outside of wrestling.”

On TNA’s future: “The sky is the limit. There’s so many talent guys here. I’ve worked with Austin Aries several times, Bobby Roode; those guys are phenomenal. There’s guys like A.J. Styles; he’s unbelievable. These kinds of guys are just getting it done, man. And when they do get the chances, they take full advantage. It just takes time, the product is going to get better and better. I don’t know what the next five or 10 years will bring, but I definitely think TNA will continue to grow. I’m not sure where exactly it’s going or how it’s going to be but it’s definitely going to be changing the game.”

On whether the physical or mental grind is hardest in wrestling these days: “The physical is pretty bad, man. That’s for sure. But I’ve started doing yoga with my wife and I think it’s helping a little bit. It’s tough, man, just mentally. It takes a hold of me sometimes, too. I always want to be good and do well in anything that I do. I stress myself out a lot of times wanting to be too over the top or whatever it may be. But its hand in hand as far as I go. Having a family know, you naturally miss home. But whenever I get into the ring I’m out there to do a job. I always have the support from the creatures and that helps me through.”