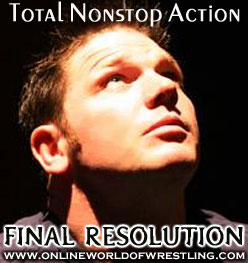 FALLS COUNT ANYWHERE MATCH
Tara defeated Mickie James: The finish happened in the men’s bathroom, where Madison Rayne popped out of one of the stalls and sprayed Mickie with a fire extinguisher and knocked her out with a belt shot!

TNA X-DIVISION TITLE MATCH
Robbie E defeated Jay Lethal by DQ to retain the TNA X-Division title: They had a hard time getting Cookie into the shark cage, so the infamous Shark Boy showed up to force her inside! Cookie threw a chain down for Robbie, but referee Earl Hebner saw it and took it away so it couldn’t be used. Cookie later threw down some hair spray, but Jay Lethal got it and used it on Robbie. Unfortunately the referee saw this and disqualified Lethal! After the match, Cookie was posing with the title and Shark Boy came out. She slapped him twice and he gave her a stunner!

SUBMISSION MMA-STYLE MATCH
Jeff Jarrett defeated Samoa Joe by submission: Before the match, TNA security Gunner & Murphy attacked Samoa Joe’s ankle (I guesss to make the match more even). The rules stated that the submission had to take place in the ring. Joe used the Rear Naked Choke on the floor and forced Jarrett to tap out but it didn’t count. Back inside the ring, Joe used a Fujiwara Armbar to make Jarrett tap again, but his leg was under the rope, so once again it didn’t count. Joe finally got the Choke on Jarrett in the middle of the ring, so Gunner & Murphy hit the ring. Joe saw them coming and knocked them both off the ring apron. Jarrett snuck up behind Joe and put him in the Anklelock until Joe was forced to submit!

TNA WORLD HEAVYWEIGHT TITLE NO-DQ MATCH
Jeff Hardy defeated Matt Morgan to retain the TNA World Heavyweight title: Mr. Anderson was the guest referee (appointed by Matt Morgan, who earned the right to pick the referee when he defeated Ric Flair on iMPACT). Jeff Hardy tried to walk out to retain his title by countout, but Mr. Anderson refused to make the count. Hardy taunted Anderson, and they had a physical altercation. Hardy hit a Twist of Hate, and Anderson flat out refused to count. Eric Bischoff came out and shoved Anderson into the ring post, making him bleed, so he brought out referee Jackson James to replace him. Morgan set up for a choke-slam, but Hardy dropped him with a low-blow and a final Twist of Hate for the WIN!