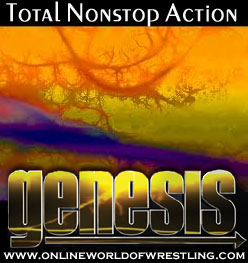 TNA KNOCKOUT TITLE MATCH
Madison Rayne defeated Mickie James to retain the TNA Knockout title: Mickie was just about to win when Tara showed up and caused her to lose focus. Mickie confronted Tara, allowing Madison to put on a loaded glove and knock out Mickie for the win!

GRUDGE MATCH
Bully Ray defeated Brother Devon by DQ: It was a big brawl until Devon brought out a chain and used it on Ray causing the disqualification. The agents rushed out to break it up. They held Devon back, allowing Ray to hit a cheap low-blow on him!

TNA TELEVISION TITLE MATCH
The Monster Abyss (sub for A.J. Styles) defeated Doug Williams to win the TNA Television title: Abyss replaced A.J. Styles because he was injured, putting Styles’ spot in Fortune at risk. Abyss went to get Janice (a 2X4 with spikes) and distracted the referee. Meanwhile, A.J. Styles ran down and whacked Williams with a belt shot. Abyss came in with a Black Hole Slam to win the Television title!

SINGLES MATCH
Matt Hardy (mystery opponent) defeated Rob Van Dam: RVD hit the five star frog splash and pinned Matt but his arm was under the rope so the referee (Jackson James) stopped the count. Matt recovered and hit the Twist of Hate, and pinned RVD 1-2-3 even though Rob’s leg was clearly under the ropes!

MMA EXHIBITION MATCH ($100,000)
Kurt Angle defeated Jeff Jarrett: There would be three 2-minute rounds. Angle had Jarrett in a choke as time ran out on the first round. Angle played with Jarrett for the entire second round, applying a series of submissions but repeatedly breaking the hold. Jarrett’s entourage put something on his gloves during the break, and he rubbed it into Angle’s eyes, thus blinding him. Angle ended up bloodied and Jarrett was disqualified. Jarrett said he was retiring his MMA career undefeated and he would have a retirement party on iMPACT (written by Vince Russo I’m sure).

#1 CONTENDERS MATCH
Mr. Anderson defeated Matt Morgan: Both men kicked out of eachother’s finishers. They both went for their finishers again but cracked heads and got knocked silly. A dazed Anderson rolled up Morgan for the 1-2-3.

TNA WORLD HEAVYWEIGHT TITLE MATCH
Mr. Anderson defeated Jeff Hardy to win the TNA World Heavyweight title: Anderson kicked out of multiple Twist of Hate’s and also kicked out of a Swanton-bomb! Jeff pulled out a chair and intended to use it on Anderson, but Mick Foley came out and snatched it out of Jeff’s hands. Ric Flair came out with security to eject Foley. Jeff called out his brother Matt, but Rob Van Dam cut him off and they brawled. Eric Bischoff grabbed the chair and intended to hit Anderson from behind with a chair, but he turned around and hit Bischoff with the Mic Check! Jeff went for a Twist of Hate, but Anderson countered with a Mic Check and scored the pin to win the TNA championship!