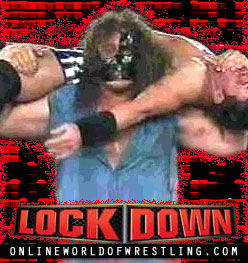 DARK MATCH (SIX SIDES OF STEEL)
“Showtime” Eric Young defeated Danny Bonaduce: After the match, Bonaduce started choking Young with nunchucks until Rhino ran out and took Bonaduce out with a GORE!

IN THE RING: Dixie Carter thanked the TNA fans..

BACKSTAGE INTERVIEW
Lauren Brooke & A.J. Styles & Christopher Daniels: This was clever because Daniels had just finished wrestling as “SUICIDE” so it was obvious (to us smarks, at least) that this interview was pre-taped. Styles and Daniels were united, but it’s still not clear where Samoa Joe and Jeff Jarrett stand.. Daniels said he was a man reborn….

QUEEN OF THE CAGE MATCH
ODB w/Cody Deaner defeated Sojourner Bolt and Madison Rayne and Daffney: Daffney came out looking really scary, but in a good gimmick kind of way. ODB was beaten up and triple teamed until Cody Deaner emptied the flash into her mouth. Suddenly she hulked up and mounted a come-back before spitting booze in Sojo’s face and following up with a power-slam for the win..

DOOMSDAY CHAMBER OF BLOOD MATCH
Matt Morgan defeated Abyss: You had to make your opponent bleed before you could pin him. Abyss has vowed to not use any weapons during this match. Abyss was bleeding two minutes into the match and Morgan began inflicting punishment on him. Morgan picked up a piece of glass and threatened to carve Abyss’ head but it was blocked. Morgan came flying off the top rope and accidentally took out the referee. Abyss grabbed a piece of glass and ripped it accross Morgan’s forehead! Abyss hit a Black Hole Slam and a second referee ran down but only made a two-count. Abyss left the cage and found a steel chair. Dr. Stevie (finally identified as Stevie Richards) came out and stopped Abyss from using the chair. The Philadelphia fans popped and chanted “EC’dub! EC’dub!”. Abyss asked Dr. Stevie for the chair, but Stevie said “No.. no more violence.” Abyss defied Dr. Stevie and poured a bag of thumb tacks onto the mat. Dr. Stevie took off his jacket and attacked Abyss! Morgan low-blowed Abyss and slammed him down on the tacks for the 1-2-3 to win the match!

TNA KNOCKOUT TITLE TRIPLE THREAT CAGE MATCH
Angelina Love w/Velvet Sky defeated Awesome Kong (c) w/Raisha Saed and Taylor Wilde to win the TNA Knockout title: Awesome Kong tried a Somersault-splash off the top rope but missed and crash-landed! Angelina & Velvet tied Kong to the cage by her braids, but when Angelina turned around she was Cross-bodyblocked by Taylor off the top rope and got knocked silly! Angelina got a legitimate concussion from this. Taylor stalled for time, and went over to check on Kong. Kong kicked Taylor towards the center of the ring where Angelina scored a semi-concious pin to capture the TNA Knockout’s title! Angelina was a bit glassy-eyed for the finish and had to be held up by the referee.

TNA/IWGP TAG TEAM TITLE UNIFICATION MATCH (PHILADELPHIA STREET FIGHT)
Team 3-D (Brothers Ray & Devon) defeated Beer Money Inc. (Robert Roode & James Storm) to retain the IWGP Tag Team titles and win the TNA World Tag Team titles: The match started out in the ring but quickly spilled out into the streets of Philadelphia (actually into the crowd). They eventually made it back to ringside, where Storm spit beer at Brother Ray and then smashed his face with the swinging cage door! Ray was bloodied. Beer Money double-suplexed Brother Devon off the ring-steps through a table. Roode botched his part and took a bump off the move but the announcers ignored it. Back in the ring, Ray planted Roode with a Bubba-bomb off the top rope to pop the crowd! A few minutes later, Ray told Devon to “GET THE TABLES!” Devon left the ring and slid a table in the ring but took too long, allowing Beer Money to recover and regain the advantage. Roode set up to throw Devon head first into cage as Storm slammed the door, but Devon reversed it and Storm ended up slamming the door on Roode’s head! Roode bounded off the cage into a 3-D through the table in the middle of the ring for the pin! Team 3-D retain their IWPG Tag Team titles and capture the TNA Tag Team titles!!

LETHAL LOCKDOWN MATCH
Team Jarrett (Jeff Jarrett & A.J. Styles & Samoa Joe & Christopher Daniels) defeated Team Angle aka the Main Event Mafia (Kurt Angle & Booker T & Scott Steiner & Kevin Nash): Basically a War Games match, where after everybody is in the cage a roof is lowered with various weapons attached. Kurt Angle and Christopher Daniels started the match…. Daniels had Angle in the Koji-clutch as the opening five minute period expired. The Main Event Mafia won the man advantage on iMPACT, so Booker T entered the match next. A.J. Styles entered the match. Scott Steiner entered the match and hit Styles with his top rope Frankinsteiner (which he only does on PPV). Samoa Joe was next, but he was shown getting some last minute advice from somebody behind the curtain (the rumor is Taz). Kevin Nash entered the match and immediately had the cage to smashed into his face by former protege, Joe. Jeff Jarrett entered the match last. The roof was lowered and everybody started doing weapon spots. Angle made his way on top of the roof, and was followed by Styles. They fought dangerously close to the edge. Angle left Styles out cold on top and went back down to the ring giving the Mafia a man advantage. Styles did his annual “please don’t die” stunt by splashing through the roof down onto everybody else below. Styles actually missed and hit the mat, but the Mafia guys sold it like he actually took them out. The fans chanted “that was awesome!” for Styles. A few minutes later, Jarrett swung a chair at Booker T, but missed and hit Styles! Angle tried to pin Styles but Joe made the save. Joe questioned Jarrett’s actions until Angle hit Joe with an Angle-slam! Everyone was down and Jarrett climbed up to pull down the guitar. The finish saw Jarrett tease that he would hit Booker with the guitar, then teased that he would hit Styles, but then smashed it over Booker T’s head allowing Styles to get the pin!

IN THE RING: Bobby Lashley debuted with the company and hinted that he might be joining the Main Event Mafia by making friends with Kurt Angle….. shockinG!

BACKSTAGE INTERVIEW
Jeremy Borash & Mick Foley (as Cactus Jack): Cactus Jack said Mick Foley was not there because he had to attend some corporate meetings. Cactus (as Foley, I guess) tweaked the match adding a traditional escape the cage stipulation just like the good old days! He also ruled that the cage door would be locked..

TNA WORLD HEAVYWEIGHT TITLE – STEEL CAGE MATCH
Mick Foley (as Cactus Jack) defeated Sting to win the TNA World Heavyweight title!: In order to win the match, a wrestler must escape the cage or score a pinfall or submission on his opponent. After a while, Foley started selling a leg injury. Foley managed to lock Sting into the Scorpion Deathlock! Foley demanded that the “damn door” be opened, but he himself ruled that it would be locked dor the duration of the match. The Foley shoved down referee Earl Hebner and threatened Slick Johnson on the floor. For some reason, Foley drop kicked the camera man through a hole in the cage and knocked him out! Foley tried to escape through the camera hole. Sting applied the Scorpion Deathlock on Foley. Foley crawled towards the hole in the cage and ordered the camera man to give him the barbed wire bat. The guy did as he was told out of “fear” because Foley is the boss. The Foley pointed the bat at Sting. Foley swung the bat repeatedly at Sting but missed. Sting tried to escape, but Foley whacked him on each leg with the barbed wire bat. Sting tripped Foley, so he fell onto the barbed wire and ripped his finger up. Sting started to bash Foley with the barbed wire bat. Foley turned the tables and busted Sting open with the barbed wire. Foley pulled out the Sock and wrapped it with barbed wire! Foley repeatedly punched Sting in the head. The finish saw both men racing to climb over the cage, and a heel Foley took a weird bump to the floor to capture the TNA World Heavyweight title in a major shocker!!