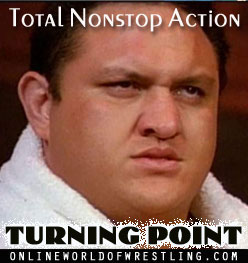 NON (X-DIVISION) TITLE GRUDGE MATCH
Rhino defeated TNA X-Division Champion Sheik Abdul Bashir: The Insane Clown Posse and the legendary Scott Hall were spotted in the audience, and the Sheik did his beat to get heat with them. Mike Tenay & Don West did not identify the “familiar faces” by name. The Sheik spit at referee Shane Sewell and they had an altercation, which allowed Rhino to cream the Sheik with a GORe! GORe! GORe!

LEGENDS TITLE VS. MEM MEMBERSHIP MATCH
Booker T w/Sharmell defeated Christian Cage to retain his unsanctioned Legend’s title: As stipulated, Christian Cage is being forced to join the Main Event Mafia. Booker T informed Christian that he had to show up for work at 8:00 tomorrow morning!

FALLS COUNT ANYWHERE MATCH
Kurt Angle defeated Abyss: After an extensive brawl all over the iMPACT Zone, Kurt Angle knocked Abyss off of a short scaffold, sending him falling down through the Spanish announce table! Incredible match.

GRUDGE MATCH
Kevin Nash defeated Samoa Joe: Kevin Nash nailed Samoa Joe with two Jacknife Power-bombs, but Joe managed to kick out! The referee was bumped and Nash low-blowed Joe and then got the 1-2-3 using the ropes for leverage to win the match..