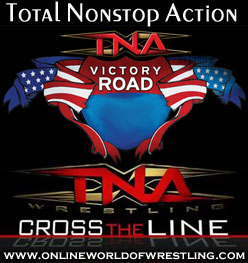 TNA KNOCKOUT TITLE ULTIMATE-X OR SUBMISSION MATCH
Douglas Williams defeated Brian Kendrick by submission to retain the TNA X-Division title: The story here was that the champion, Douglas Williams, was afraid of heights so the Ultimate-X was the worst case scenario for him. Williams tried to conquer his fears by trying to climb the structure just as the bell rang to start the match. Kendrick pulled him down and they engaged in a mat battle, where Williams dominated. Williams found some “climbing gloves” under the ring and put them on his hands. Williams climbed up the structure and tried to crawl to the center but Kendrick caught up to him and they both fell down. Moments later, Williams hooked in a submission and choked Kendrick out to win the match! The referee used smelling salts to revive Kendrick after the match.

BACKSTAGE INTERVIEW
Christy Hemme & Brother Ray: Brother Ray said Jesse Neal was a failure just like Christy’s edition of Playboy. Ray said it was in Devon’s best interest not to lay a hand on him, because he made Devon. Ray said without him, Devon would be nothing, and he could never make it in this industry without him. Ray harassed Christy and asked if she was going to cry. She fired back saying she was NOT GOING GO CRY! Hemme is hot when she’s angry.

TRIPLE THREAT MATCH
Brother Ray defeated Brother Devon and Jesse Neal: It started out as Brother Ray vs. Jesse Neal with Brother Devon not coming out to the ring. A few minutes into the match; Tommy Dreamer, Stevie Richards, Rhino, and Raven showed up in the audience. Ray was distracted by their presence and Neal took advantage. Ray brought a steel chair into the ring, and Shannon Moore ran down to protest. The referee was distracted by Moore, so Ray whacked Neal with the chair! At this point, Devon showed up and joined the match. Devon went nose-to-nose with Ray for what seemed like an ackward eternity, before starting to brawl. Neal charged accross the ring at Ray, but took out Devon with a Spear instead! Neal was stunned and Ray finished him off with a Bubba-bomb for the win! Ray yelled “see what he did to you?” at brother Devon after the match. Ray left Devon in the ring with Neal.

TNA KNOCKOUT TITLE VS. CAREER MATCH
Angelina Love defeated Madison Rayne to win the TNA Knockout title: Madison Rayne was wearing an outfit that was a almost the same color as her skin so it often looked like she was naked. Two minutes into the match, Madison brought a chair into the ring but Angelina kicked it into her face! Suddenly a mystery biker chick wearing black leather drove down to the ring on a motorcycle. The mystery chick attacked Angelina on the floor and rammed her head into the ring post. The referee confronted the biker chick and tried to find out her identity (because if it was one of the Beautiful People then Madison would be disqualified). The biker chick threw the referee down and he ended up disqualifying Madison and awarding the Knockout title to Angelina Love! Madison threw a fit and left with the biker chick on the back of the motorcycle. The controversy is that the stipulation was that Madison would only lose her title on a DQ if it was caused by Beautiful People interference. There was no evidence that the biker chick was a member of the Beautiful People group. Rumor has it the biker chick is TARA.

BACKSTAGE INTERVIEW
Christy Hemme & Mr. Anderson: Mr. Anderson cut a promo trying to be cute, witty, and funny. Anderson tried to use Christy’s butt as a prop but she didn’t want to participate. Boo. Anderson said he was going to control the Monster Abyss. Anderson said RVD’s hopes of retaining his title are going to go up in flames (pretends to smoke a joint). Anderson said he was an ordinary everyday asshole, but when the smoke clears, he has an opportunity to become a World Heavyweight champion asshole!

TAG TEAM MATCH
A.J. Styles & Frankie Kazarian defeated Rob Terry & Samoa Joe : Ric Flair did not come out with Styles & Kazarian, because he was preparing for his match with Jay Lethal later. The crowd hated Big Rob, but clearly loved Samoa Joe. Styles & Kazarian seemed to be working well together for a change. Styles & Kazarian both hit their finishers on Rob Terry and pinned him together to win the match! They got caught up in the moment and started hugging and celebrating. Desmond Wolfe showed up and acted like he was part of the Fortune group. Styles/Kazarian left the ring and Samoa Joe gave Wolfe a Muscle-buster!

BACKSTAGE INTERVIEW
Christy Hemme & The Moster Abyss: Abyss said THEY gave him the blueprint for his new weapon, and the power to continue to pave the way for THEM, because when THEY get here they are taking over! Abyss said tonight his path of destruction, when he and his “girl” win the World Heavyweight championship! Abyss warned his three opponent that they would find out what a bitch his girl can be. His “girl” is a 2X4 with dozens of spikes in it.

STEEL CAGE MATCH
Hernandez defeated Matt Morgan: They had a quick brawl and then the match slowed down considerably while Morgan had the advantage. Morgan had the match won, and could have walked out the door, but changed his mind so he could punish Hernandez some more. Hernandez was bloodied but made a comeback with some impactful offense. Hernandez laid out Morgan and climbed to the top of the cage. He paused to pose for the fans before leaping off, but Morgan moved and Herndez crashed down to the mat! Morgan pulled out a set of hand-cuffs and cuffed Hernandez to the top rope. Morgan started taunting Hernandez before beginning to climb the cage. Morgan sat on top of the cage and bragged about how smart he was. Hernandez used his power to break out of the cuffs; then bounced off the ropes and speared himself threw the door to land on the floor and win the match!

BACKSTAGE INTERVIEW
Christy Hemme & “The Nature Boy” Ric Flair: Christy said there was a possibility that Jay Lethal could beat him tonight and Flair said sometimes he thinks she is a blonde. Flair bragged about his 39 years in the business. Flair said he would smack Lethal so hard he would go back home to his mama to breast-feed. Flair said one thing was for sure, he is the greatest wrestler who ever lived. WOOO!

SUPER GRUDGE MATCH
“Black Machismo” Jay Lethal defeated “The Nature Boy” Ric Flair: Jay Lethal was wearing red and yellow in honor of Hulk Hogan (who made the match). The match started slow and gave the impression they would be going long. Lethal hit Flair with a top rope Superplex! Lethal tried to follow-up with a moonsault, but Flair wisely rolled out of the way. The fans had dueling chants of “Let’s go Lethal!” and “Let’s go Flair!” Flair was using all of his dirty moves; low blow, thumb to the eye, and chop block. Flair locked Lethal into the Figure-4 and used the ropes for leveral while referee Earl Hebner wasn’t looking. Eventually Hebner caught Flair holding the ropes and forced him to break the hold. Flair started shoving Hebner, so Hebner took a stand and shoved back. A few minutes later, Lethal did a sunset flip and pulled Flair’s trunks down exposing his white ass! The fans cringed in the front row. Lethal locked in the Figure-4 leglock on Flair, who eventually submitted and gave Lethal a historic victory! Lethal started crying real tears in the ring after beating his idol. Flair bullied Earl Hebner, who shoved Flair down once more! Lethal grabbed the microphone and said “hey Mom, I did it!!”

BACKSTAGE INTERVIEW
Christy Hemme & Jeff Hardy: Jeff Hardy said he would keep the Victory Road hot! Hardy said all his fans would fly high with him tonight as the World Heavyweight champion! Hardy said some more weird stuff and then left the set.

SINGLES MATCH
Kurt Angle defeated the #8 ranked Pope D’Angelo Dinero by submission: Kurt Angle previously said that the next match he loses will be his last match. Angle won this good match with an Anklelock to make the Pope tap out.

BACKSTAGE INTERVIEW
Christy Hemme & TNA World Heavyweight champion Rob Van Dam: RVD said he doesn’t trust Mr. Anderson, and Jeff Hardy was cool but he has no friends out there. RVD said there’s only one way to prepare for Abyss, getting his hands on the weapon and inserting it where the sun don’t shine!

TNA WORLD HEAVYWEIGHT TITLE 4-WAY MATCH
Rob Van Dam defeated Jeff Hardy and Mr. Anderson and The Monster Abyss to retain the TNA World Heavyweight title: The ring entrances and Jeremy Borash introductions took forever, but when the match eventually got started, the three fan-favorites ganged up on Abyss. Anderson tried a sneaky roll-up on RVD, but only got a two-count. A few minutes later they did a big Tower-of-Doom spot with Abyss on the bottom and RVD on the top. Lots of action for the next 10 minutes, but the match ended quite a bit anticlimactically when RVD hit all three men with a Five-Star Frog Splash and pinned Anderson to retain the TNA World Heavyweight title.

POST MATCH SEGMENT: Abyss got up and attacked Rob Van Dam and chased the referee out of the ring. Abyss pulled out the 2X4 loaded with spikes and threatened to murder RVD. Abyss swung the weapon, but RVD ducked and escaped harm. Abyss bashed the ring and it ripped up the canvas.