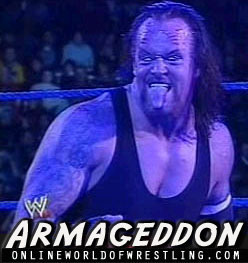 BACKSTAGE SEGMENT
Eve Torres & Hornswoggle & Fit Finlay: Fit Finlay told Hornswoggle that he was not allowed to go to the ring tonight for his own safety. This made Hornswoggle sad.

IN THE RING
John Bradshaw Layfield + Shawn Michaels: John Bradshaw Layfield came out to the ring and introduced his “employee” Shawn Michaels. Shawn talked about the poor economy and that he was in a tough spot financially. Shawn said he took the job with JBL to help his family’s future. Shawn said JBL was a bully, but can help him put his kids through college. Shawn said he didn’t want to become one of those old guys wrestling in high school gyms or become a wrestling tragedy. The crowd started to chant “you sold out!” at the Heartbreak Kid. JBL took the microphone and stuck out his hand. Michaels looked down at the ground and shook JBL’s hand. This storyline will never make sense, but I think this is WWE’s answer to the movie “The Wrestler” coming out next weekend.

BELFAST BRAWL
Fit Finlay defeated Mark Henry w/Tony Atlas: Despite being told to stay backstage, Hornswoggle eventually made his way to the ring anyway. Fit Finlay broke one shillelagh over Mark Henry’s knee, and then cracked Henry with a second shillelagh (thrown in by Hornswoggle) on the head for the win!

BACKSTAGE SEGMENT
The WWE Divas + Santa CLHaas + Santino Marella & Beth Phoenix + The Boogeyman + Goldust: Santa Clhaas (Charlie Haas) found some WWE Divas decorating a Christmas tree and started handing out presents. Santino Marella & Beth Phoenix showed up bragging about Beth’s “Best WWE Diva” Slammy. Santino wanted a present, but found The Boogeyman waiting for him! Santino tried to run away but found Goldust under some mistletoe. The craziness ended with everybody singing “We Wish You a Merry Christmas.”

PROMO: Mr. Kennedy was there to, you guessed it, plug his new straight-to-DVD movie “Behind Enemy Lines: Columbia”

EIGHT-DIVA SANTAS LITTLE HELPER TAG TEAM MATCH
Michelle McCool & Maria Kanellis & Mickie James & Kelly Kelly defeated Victoria & Natalya Neidhart & Maryse Ouellet & Jillian Hall: After the match, Michelle and Maria fought over their recent issues until Michelle walked out and solidified her heel status. The Great Khali came down for a Khali Kiss-cam segment. Mickie, Kelly, and Maria were left in the ring, but none of them wanted the kiss. Mae Young showed up unannounced and got a sloppy kiss from the Punjabi Playboy!

WORLD HEAVYWEIGHT TITLE MATCH
John Cena defeated Chris Jericho to retain the World Heavyweight title: Chris Jericho hit the Code-breaker but John Cena kicked out. Cena hit the FU but Jericho kicked out. A few minutes later, Cena powered out of the Walls of Jericho and applied the STF-U until Jericho tapped out!

WWE CHAMPIONSHIP TRIPLE THREAT MATCH
Jeff Hardy defeated Edge (c) and Triple H to win the WWE Championship: Edge speared Jeff Hardy through the SmackDown! announce table! Late in the match, Triple H was on his way to victory when Vladimir Kozlov came down and attacked him and pushed Jeff Hardy off the top rope! A few minutes later, Triple H gave Edge a Pedigree and Hardy flattened HHH with a Swanton and pinned Edge to capture the WWE Championship!!