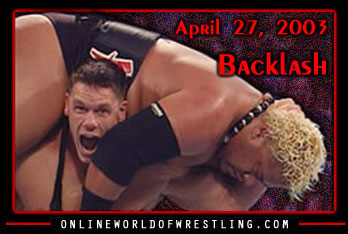 BACKSTAGE: D-Von suggested he and Bubba should jump to Smackdown!, then Chief Morely said he’ll referee their title match tonight..

BACKSTAGE: Team Angle dedicated their match to Kurt Angle, and brought a big photo of Kurt into the arena with them..

BACKSTAGE: The Rock gave his usual interview, including the predictable teasing of Lilian Garcia who got a boner I think..

BACKSTAGE SEGMENT
Test & Torrie Wilson + Sable: Test forced himself on Torrie Wilson and kissed her despite her saying “No” many times.. Sable was watching the whole thing in the background..

SINGLES MATCH
Sean O’Haire w/Roddy Piper defeated Rikishi: Roddy Piper came out a basket full of coconuts. Late in the match, Rikishi & Sean O’Haire super-kicked eachother at the same time! Roddy Piper kept entering the ring with a coconut, but Rikishi grabbed it and cracked one over Piper’s head!! O’Haire won with a fireman’s carry into a slam after the distraction..

BACKSTAGE SEGMENT
Rob Van Dam & Kane: RVD said that the situation they’re in is not cool. RVD said that he liked being one half of the World Tag Team champions. RVD said he thought no matter how bad they kick Dudley ass, Chief Morely will not let them win. Kane said if they’re gonna go down, then they’ll take the Dudleyz AND Chief Morely down with them!

BACKSTAGE SEGMENT
Stacy Keibler & Torrie Wilson: Stacy confronted Torrie Wilson about what Sable had told her earlier. Stacy attacked Torrie Wilson until some other women, including Ivory wearing a towel, pulled her off. Editor’s Note: Why was Ivory in a towel if she wasn’t booked on the show???

GRUDGE MATCH
The Big Show defeated Rey Mysterio: Rey Mysterio teased The Big Show with a game of cat & mouse to start the match. Mysterio used a chair from under the ring as an equalizer. Mysterio hit a 619 to the gut, then a 619 to the butt!! Big Show countered the west coast pop into a brutal choke slam for the win! Mysterio had to be stretchered out, but Big Show came back and swung the stretcher like a baseball bat into the ringpost!

BACKSTAGE SEGMENT
Torrie Wilson & Stacy Keibler + Scott Steiner + Test: Torrie & Stacy are brawling (errr catfight) backstage, ending with Stacy getting knocked out. Scott Steiner came by and helped Stacy to her feet and carried her away. Test showed up and asked Steiner “what the heck is going on here?” showing his jealous side..

BACKSTAGE INTERVIEW
Terri & The Rock: The could have just showed a promo from last year and I wouldn’t have noticed..

MAIN EVENT
Bill Goldberg defeated The Rock: The Rock spent most of the match selling for the WWE newcomer. Goldberg pinned the Rock after a spear and a jackhammer!

AFTER THE SHOW: After the cameras went off the air, The Rock gave a farewell speech and said he’d be back some day..