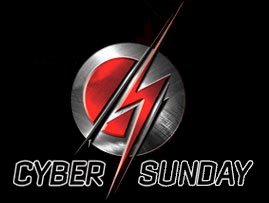 Cyber Sunday was an annual professional wrestling pay-per-view event produced by World Wrestling Entertainment (WWE). In 2004 and 2005, the event was known asTaboo Tuesday[1] and was exclusive to the Raw brand.

During the event’s “Taboo Tuesday” years, it was the first regularly-scheduled pay-per-view held by the company on a Tuesday since 1991’s This Tuesday in Texas, the first regularly-scheduled non-Sunday pay-per-view since the 1994 Survivor Series, and the first non-Sunday pay-per-view of any kind since In Your House 8: Beware of Dog 2 in 1996. The inaugural event was held in October, and the 2005 event was pushed back to early November. By 2006 the show was moved to a more traditional Sunday night slot—alleviating problems with the taping schedule of SmackDown! (usually held on Tuesdays)—and renamed Cyber Sunday.