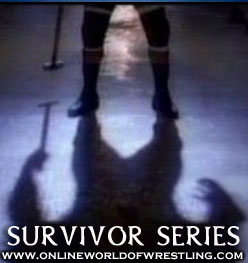 GRUDGE MATCH
Batista defeated Rey Mysterio: The crowd cheered for the heel Batista since he is from Washington DC. Batista destroyed Rey Mysterio with three Batista-bombs until the referee stopped the match. Mysterio was stretched out. It was a short match.