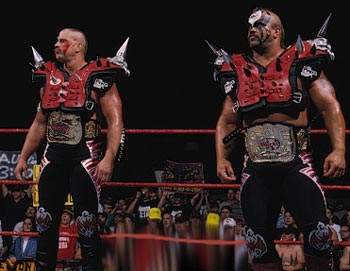 They “snacked on danger & dined on death,” competed in WarGames, the Night of the SkyWalkers, the Tower of Doom and against the best tag teams of the 1980’s and 1990’s. Many consider the Road Warriors best tag team of all-time (Sorry Team 3D) being the only team to win the GCW, AJPW, AWA, WWE & NWA/WCW World Tag Team championships. They certainly are one of the most intimidating and impersonated figures in wrestling (see Demolition, Powers of Pain, et al.) Hawk and Animal along with their manager “Precious” Paul Ellering used to scare the crap out of their opponents while bringing people out of their seats causing the backstage phrased “Road Warrior Pop.” But everything you saw on WTBS, TNT, USA and WWE syndicated programming is nothing to the life backstage and out of ring.

I wish I was writing a review of a dual biography but in 2003 Hawk AKA Mike Hegstrand passed away in his sleep. This story is told by Animal AKA Joe Laurinaitis with some assistance from Andrew William Wright and a forward by Mr. Ellering. The title is “The Road Warriors: Danger, Death & the Rush of Wrestling”, (Medallion Press, $24.95, 388pp.)  In the last few years Mr. Laurinaitis has taken a backseat in the news headlines to his son James who was a fearsome force on the defense of the Ohio State Buckeyes and currently the St. Louis Rams & his brother John who is head of talent relations for World Wrestling Entertainment. But this excellent book will bring him back, hopefully to the WWE Hall of Fame.

If you have watched the 2005 WWE DVD on the Road Warriors “The Life and Death of the Most Dominant Tag Team in Wrestling History,” some of the book is redundant. But it’s still great to hear the stories of growing up in Minnesota and becoming a nightclub bouncer. It’s in those clubs fate met not only Laurinaitis and Hegstrand, but fellow former wrestling stars “Ravishing” Rick Rude, Barry “Smash” Darsow & John “the Bezerker” Nord. All of those men were bouncers and met former 1950’s & 60’s star Eddie Sharkey who trained them in the worst conditions imaginable (yes worse than Hart family Dungeon). From there a meeting with former World Tag Team champion Ole Anderson launched the creations of Hawk & Animal.

Like many other wrestlers turned biographers, Mr. Laurinaitis is a great storyteller. From sharing an apartment with Jake Roberts to press slamming the legendary duo of Bruiser & Crusher to taking Japan by storm; no detail is overlooked. I will be honest I was a bit surprised at the honesty of using performance-enhancing methods but it was not illegal in the 1980’s and stories of Mr. Hegstrand’s substance abuse issues that would haunt him until his passing. The other great surprise involves how the tag team made millions thanks to a pair of workout pants, trust me it’s better to read it in the book than me giving it away here. I came away from reading this feeling Laurinaitis loved the business that took him around the world several times, loved his best friends & brothers in the business and loves his wife Julie and children Joey, James & Jessica. Hopefully you purchase it and enjoy the stories. To quote Hawk, “Oh What A Rush!!”

“The Road Warriors: Danger, Death & the Rush of Wrestling” is now on sale in bookstores across America and shopping websites. You can also buy direct from the publisher, Independent Publishers Group through www.ipgbok.com

Mr. Laurinaitis was recently a guest on  Online World of Wrestling Radio program . You listen to the archive by going to www.owwradio.com .